Jun 23, 2021
Dam owner Brookfield Renewable Partners said in a statement that the company is disappointed by such claims from groups that want dams removed in lower Kennebec River communities. 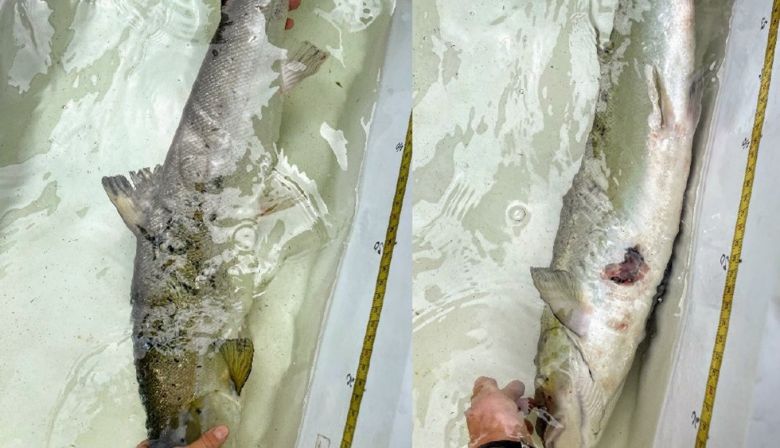 Atlantic salmon injured by drop in water flow at Lockwood Dam due to Brookfield actions. Photo Maine DMR
Jeffrey Reardon said he knew Atlantic salmon and other fish get trapped and injured as flashboards are replaced each year at the Lockwood Dam on the Kennebec River in Waterville.

But he didn’t realize the magnitude of the situation until he helped rescue the fish last week.

“This is something that I knew, but it was really shocking to see it,” Reardon, director of Trout Unlimited in Maine, said Tuesday in a phone interview.

Trout Unlimited and the Atlantic Salmon Federation issued a statement Tuesday expressing anger that the routine operations at Lockwood trapped and injured some of the few Atlantic salmon they say are able to migrate through the watershed. Both organizations are working to restore and conserve the endangered Atlantic salmon.

They are among entities that have long advocated for dam removal, maintaining that salmon and other fish have a difficult time passing through the fish lift at the Lockwood Dam, as well as through three other dams between there and the Sandy River, where the salmon travel to spawn before returning to the ocean.

Dam owner Brookfield Renewable Partners released a statement Tuesday through spokeswoman Miranda Kessel saying the company is “disappointed in recent claims made by these groups in their continual pursuit of dam removal within the lower Kennebec communities.”

“Brookfield Renewable executed routine flashboard repairs and installation of the upstream eel passage ramp at the Lockwood dam on June 15 that included a two-feet drawdown of the impoundment, starting at 9:00 a.m. and concluded with the impoundment refilled by that afternoon,” the statement says.

The company went on to say the dam work plan was developed in consultation with the state resource agencies and that the flashboard repairs “also have an ancillary benefit to better optimize flow conditions for the movement of fish.”

Kessel noted Tuesday in an email that Trout Unlimited’s statement online contains a link to the report by Maine Department of Marine Resources “and reading through it, it’s easy to conclude that the claims outlined in the press release are speculative.”

The dispute comes as four conservation groups — including the Atlantic Salmon Federation, Conservation Law Foundation, Maine Rivers and Natural Resources Council of Maine — have filed notices of intent to sue dam owner Brookfield Renewable Partners over alleged violations of the Endangered Species Act at the four dams it owns on the lower sections of the Kennebec River, including Lockwood.

The notices spell out the intent to sue officials and attorneys for the renewable power subsidiary of Brookfield Asset Management, an Ontario-based global asset manager with $60 billion in annual revenue and $600 billion in assets, including 5,300 hydropower dams worldwide, 38 of which are in Maine. The Endangered Species Act requires potential litigants to file such a notice at least 60 days in advance of filing a suit. The groups allege that Brookfield Renewable has been killing Atlantic salmon at its dams on the Kennebec in violation of the law since Dec. 31, 2019, when its federal authorizations to kill salmon expired.

Each spring, Brookfield replaces flashboards at the Lockwood Dam that get knocked down by ice and high water in winter when such maintenance is not possible. Flashboards are installed to raise the elevation of the impoundment and divert flow to the turbines. When they are installed, water flow into the dam’s quarter-mile-long original channel is cut off, stranding salmon and other fish attracted to flow over the spillway, according to Reardon, who supplied photos of the injured fish Tuesday.

“We got asked by the Department of Marine Resources to provide some volunteer labor this year and it was the first time I’d seen the whole thing play out and it’s pretty dramatic,” he said in the phone interview.

On June 15 the operation stranded at least three adult salmon, 23 salmon smolts and other fish below the Lockwood Dam when the flow was shut off to hundreds of feet of ledge and pools below, he said.

Two adult Atlantic salmon, which are a federally endangered species, had visible injuries.

“Brookfield has been operating this dam without ‘take’ coverage under the Endangered Species Act for more than 16 months,” Reardon said in the statement. “Under the ESA, ‘Take’ includes harassing, harming, pursuing or wounding salmon. If this is not a take under the ESA, it’s hard to imagine what would be. And this happens every year.”

Each spring, the Maine Department of Marine Resources rescues salmon and other fish stranded by the diversion.

“Rescuing salmon from normal operations at this dam should not require that more than a dozen volunteers show up on a Tuesday morning,” Erskine Academy graduate Phillip Allen, a Trout Unlimited volunteer from Vassalboro, said in the statement.

The Department of Marine Resources issued a “Field Summary of Atlantic Salmon Stranding Rescue at Lockwood Dam,” which says six of its staff members, two from the Maine Department of Inland Fisheries & Wildlife, four from Brookfield and about 10 from Trout Unlimited and other conservation groups took part in the rescue June 15. One injured Atlantic salmon, an adult male that had spent two years at sea before returning to Maine, was captured and taken by truck to the Sandy River in Franklin County, 50 miles away.

“At least two other adult salmon — one visibly scarred — were also trapped in an isolated pool but could not be captured,” the Trout Unlimited and Atlantic Salmon Federation stated. “Twenty-three Atlantic salmon juvenile smolts stranded on their way to sea after two years in freshwater were also netted and released downstream.”

The Marine Resources report describes the single salmon that was captured as a 28-inch male. Analysis indicated it had extensive injuries, included “scraped up body dorsally, scraped up sides (both left and right), an abrasion ventrally, a bruise on its left side, a lamprey wound scar on its right side, a split dorsal fin, a split caudal fin and a bruised snout.”

Trout Unlimited volunteer Steve Brooke, who helped with the rescue, noted that the single captured salmon was subjected to 11 minutes of active handling from the time it was netted to the time it was placed in a tank truck for transport upstream.

“Without the rescue effort, that fish likely wouldn’t have survived,” Brooke said. “But 11 minutes out of water is a long time, and that fish was handled multiple times. It was the lesser of two evils, but still a stressful event for the salmon.”

John Burrows, director of U.S. Programs for the Atlantic Salmon Federation, said that what transpired at Lockwood on June 15 may be routine for Brookfield, but it is “unacceptable and illegal.”

“Brookfield does not have the legal authority to harm, injure or kill Atlantic salmon at Lockwood or any other dam that they own on the Kennebec River,” Burrows said. “Yet they continue to do so. This is precisely why last month our organizations announced our intent to sue Brookfield for its undeniable violations of the (Endangered Species Act).”

In a phone interview Tuesday, Burrows said that if not for the work of the Department of Marine Resources trucking salmon eggs to the Sandy River and embedding them in gravel there, the population would not exist. There are so few fish in the fish run to begin with and to see even three or four killed or injured is heartbreaking, according to Burrows.

“It’s like a double punch to the gut when you think about it from that perspective,” he said.