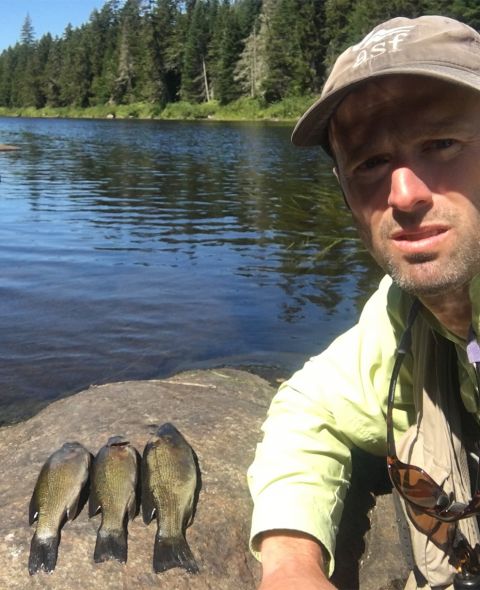 ASF's Nathan Wilbur with three smallmouth bass he pulled from the Southwest Miramichi on Sat., Sept. 1. The fish pose a serious threat to the Atlantic salmon in the river. Nathan Wilbur/ASFåç
A salmon conservationist who hooked a few smallmouth bass in the Southwest Miramichi River says his catch affirms his group's concerns about the fish infiltrating the watershed.

Nathan Wilbur, the New Brunswick program director for the Atlantic Salmon Federation, reeled in three bass Sunday at the McKiel Pond pool on the Southwest Miramichi, 2.4 kilometres upstream from where a smallmouth was photographed at Tent Pool.

The pools aren't far from the river's headwaters at Miramichi Lake, where the fish were being held by a barrier before escaping via Lake Brook -a narrow stream connecting the lake to the main river.

"It's a huge threat for Atlantic salmon on the Miramichi," said Wilbur, who also hooked and lost a fourth smallmouth bass on Sunday.

Wilbur said smallmouth bass were spotted in the Southwest Miramichi Aug. 22 near the mouth of McKiel Brook by Allen Curry, a researcher at the University of New Brunswick in Fredericton.

The salmon federation, which is based in Saint Andrews, and other conservationists immediately sounded alarm bells about the invasive species' potential impacts on the river's dwindling wild Atlantic salmon runs.

On Aug. 27 and 28, Wilbur said, crews from Fisheries and Oceans Canada (DFO) and the Miramichi Salmon Association did extensive field work along several stretches ofthe river to find where bass are most present.

Smallmouths were caught on video at McKiel Brook before Wilbur's fishing excursion. He then decided to cast a line on the Labour Day weekend.

Wilbur angled one nine-inch bass in the first hour of his trip, then landed two more. His catch was concentrated in one small portion of McKiel Brook, as he fished the rest ofthe pool for another five hours and didn't catch anymore bass.

Wilbur's fish were sent to UNB for analysis. They were expected to be submitted to DFO Thursday.

Tent Pool was also seined using a vertical net held down by weights and buoyed with floats aimed at luring the smallmouths into a net-like trap just downstream, but no bass turned up.

The salmon federation and other groups have pushed DFO for years to chemically eradicate the bass that were released illegally in Miramichi Lake in 2008.

Wilbur said DFO was warned in a 2010 report that bass had to be eradicated or they would eventually escape into the river.

"That's exactly what appears to have happened," said Wilbur.

Smallmouth bass -like their cousins, the striped bass, which are native to the Miramichi -are known for their fierce appetite and their ability to adapt to new aquatic environments.

Conservationists have long been calling for action from DFO to control fluctuations in striper stocks, as stripers have been found to gobble up young salmon smolts.

The full extent ofthe striper threat to salmon, and whether humans should intervene in controlling their populations, remains a source of debate among experts and recreational anglers.

If smallmouth bass can establish a population in the Miramichi system, Wilbur said, containing them will be much harder. They would also create another obstacle to salmon preservation efforts.

Wilbur said that issue -and the fall weather conditions coming in the weeks ahead -are why DFO, salmon groups and Indigenous leaders working on the smallmouth file need to act quickly.

"We have a small window now, and we're all trying to get moving on this."

Smallmouth bass have also been found in Lake Brook on four other occasions, he said.

Wilbur said officials will return to the Miramichi's upper reaches this week to conduct further studies in effort to determine how many fish left the lake, what can be done about it and if any spawning has occurred.

DFO spokesman Steve Hachey said his department is aware ofthe sighting of an invasive fish species in the upper reaches ofthe Miramichi River watershed. He said officials will reach out to stakeholders to develop a plan and ensure it doesn't establish a population in the fragile ecosystem.

"Once options are selected with the partners, the department will task a response accordingly," said Hachey.