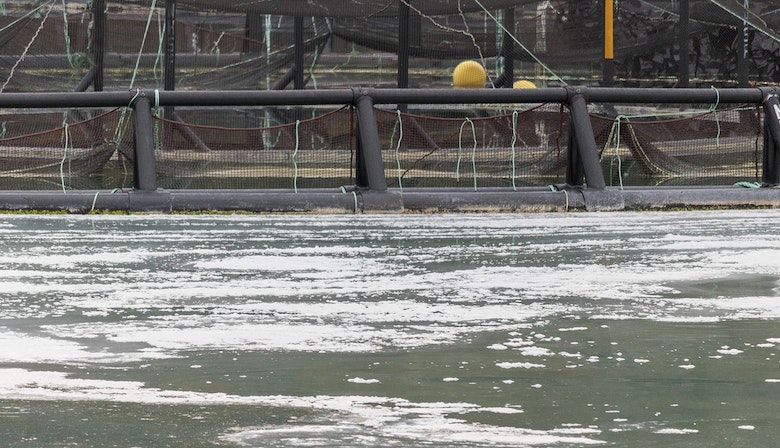 With 2.6 million farmed salmon dead, beaches and seafloor contaminated and smothered, and regulators seldom seen, questions are being asked on overall regulation of NL aquaculture. Atlantic Salmon Federation/Bill Bryden,
Despite complaining of lax provincial oversight into Atlantic salmon farming operations in Newfoundland and Labrador, the Atlantic Salmon Federation is not planning to sue to push more regulation of the industry into federal hands.

Atlantic Salmon Federation Executive Director of Communications Neville Crabbe told SeafoodSource the wild Atlantic salmon conservation nonprofit remains deeply concerned about the environmental toll of continued expansion of the salmon-farming sector in Newfoundland, and the provincial government’s close ties to the industry. Nevertheless, it will not launch a legal challenge similar to the lawsuit filed by Ecojustice and activist Alexandra Morton against the Province of British Columbia, which was resolved in 2009 when a judge ruled provincial regulation of the ocean-finfish aquaculture sector was unconstitutional.

Rather, during a 17 Oct. press conference in St. John’s, Newfoundland, the ASF called for a full environmental assessment of Mowi Canada’s planned expansion of its local operations.

“The status quo is no longer good enough,” ASF Community Outreach Coordinator Steve Sutton said at the press conference. “Whether its covert campaigns of illegal pesticide use, unreported escapes, excessive antibiotic use, or the attempted cover-up of millions of dead salmon, this industry has benefitted long enough from the blind eye of regulators and the preferential treatment of politicians. Company owners and shareholders have consistently put themselves and their profits above all other users of the marine environment. This industry needs tougher regulation, stricter enforcement and the highest standards to protect wild species and the environment.”

Sutton and the ASF are calling for the completion of a full environmental assessment process for Mowi Canada’s Indian Head hatchery, which it said will provide 2.2 million salmon smolt to the company’s Northern Harvest Sea Farms, which recently suffered a die-off of 2.6 million fish in August and September. Several salmon at the farms were also found to have tested positive for infectious salmon anaemia (ISA) this summer, though a company official told SeafoodSource the disease did not result in the mass mortalities incident it experienced.

An Ecojustice lawsuit challenging Newfoundland’s approval of the Indian Head project was initiated in April 2019, but Crabbe said ASF will not be a party to that suit, as its resources are tied

“Timing is everything and circumstance matters,” Crabbe said. “We’re not a large organization by any standard – [we] can only take on so much. There’s a lot of good people that are involved in that challenge, and we just reasoned, What could we add to it?’ And the answer was basically nothing. It was really just sort of a practical, operational decision.”

The site of the mass die-off has never undergone an environment assessment, Crabbe told Seafoodsource.

“They were just placed in the water years ago,” he said. “Our position is unchanged – we have always thought this expansion should be thoroughly reviewed, including seeing what happens to these fish once they leave the hatchery. But now in light of this mass die-off, it needs to be determined whether they can accommodate additional fish. Can the company actually handle an expansion? An environmental assessment is not a perfect solution, but under Canadian law, it’s best tool available demonstrate project can be done safely, successfully, and without causing unacceptable environmental harm.”

Crabbe also called for a full investigation of the mass mortality and more transparency from Mowi Canada.

“I’m not in a position to say whether or not Mowi has violated specific provisions of either federal or provincial law but I hope regulatory authorities are looking into that and will take action if indeed that is the case,” Crabbe said. “Thus far, the information flow on this by Mowi has been pretty constrained. That’s not unusual for this industry – I think that salmon aquaculture in eastern Canada has long been protected by a cone of silence, and there’s very little that companies are required to disclose and the industry hasn’t ever shown a commitment to true transparency.”

The industry has been protected to some extent by the provincial government, Crabbe added, due to its status as one of the largest employers in the region, and also because the government has financial stake in the success of the industry as an investor in several aquaculture projects, including the Grieg NL Placentia Bay project.

“We have said from the beginning it is not appropriate for the Newfoundland government, which is an equity investor in that [Grieg] project, to also be a regulatory decision-maker. On its face, that is a basic conflict of interest,” he said. “Furthermore, its strategic plan has the province operating under a push for an increase in farmed salmon from 17,000 [tons] to 50,000 tons of annual production, which is an aggressive growth footing. If that’s the mandate given to the Department of Fisheries and Aquaculture, how can they simultaneously police the industry? it brings up a lot of legitimate questions as to why the provincial government of Newfoundland and Labrador has not shown an interest or willingness to effectively regulate this industry.”