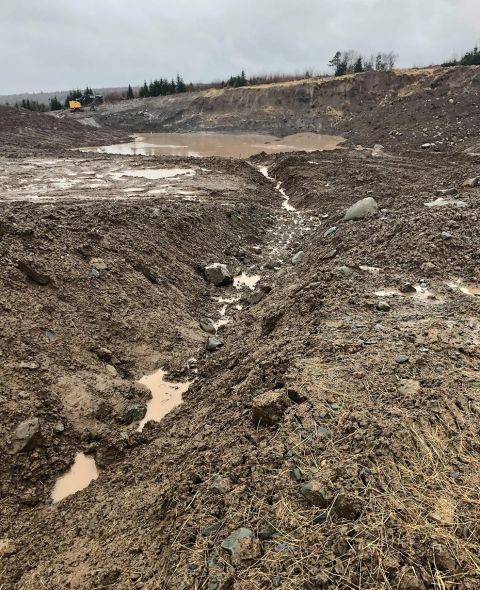 Atlantic Gold earthmoving in the vicinity of Moose River has resulted in silt-laden runoff and the company is in court on environmental charges. Photo Matt Dort
An Australian gold mining company was arraigned on a slew of environmental charges in provincial court in Dartmouth, N.S., Tuesday morning.

The company is accused of "failing to comply with the conditions of an approval" and "releasing substances into the environment in amount, concentration or level in excess of approval level or regulations."

The offences allegedly took place between February 2018 and May 2020.

Most of the charges are related to the area of Mooseland and Moose River Gold Mines, where the company has an open pit gold mine. The other alleged offence locations named in the charging information are 15 Mile Stream, Jed Lake and Seloam Brook.

The company was granted a request to adjourn the case until March 15, when it will enter a plea.

Atlantic Gold spokesperson Dustin O'Leary said the incidents leading to the charges were self-reported by the company to the Nova Scotia Environment Department.

"Atlantic Gold has been proactively working with NSE to address these matters. Full and thorough remediation work was conducted at the time of the incidents, all of which were reported, with an ongoing focus on mitigation," O'Leary said in an email response to CBC News.

"The main incidents raised by the NSE relate to instances where significant rainfall events have caused water, containing silty road materials, to run-off secondary access driveways and overwhelm the existing storm water management system. There is no connection with or impact on current mining activities, including the tailings processing and management facility."

Atlantic Gold plans to develop three more open pit gold mines on the Eastern Shore and truck the ore to a central processing facility at Mooseland where it operates the Touquoy mine.

The company recently told investors it will proceed next with 15 Mile Stream and Beaver Dam locations.

The startup date for its controversial Cochrane Hill site on the St. Marys River has been delayed by several years. There is uncertainty over whether the province will allow the company access to the water supply it wants to use at Cochrane Hill.

There is some local opposition because of its proximity to the St. Marys River, home to a remaining Atlantic salmon population.
https://www.cbc.ca/news/canada/nova-scotia/atlantic-gold-in-court-facing-32-environment-charges-related-to-n-s-mine-1.5887795