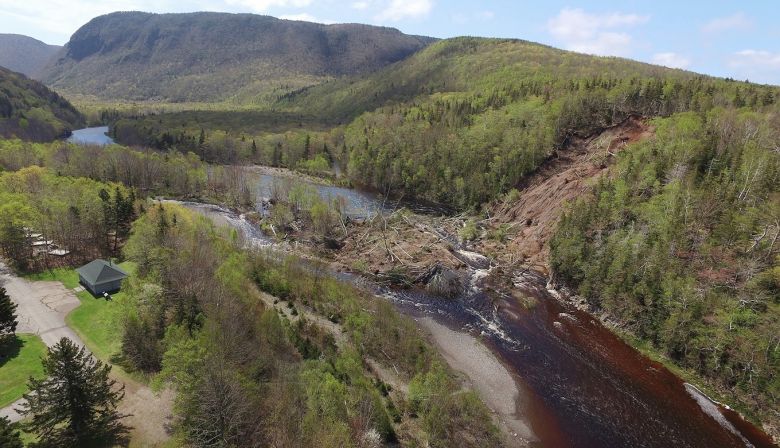 The landslide of May 27, 2018 threatened the entire run of Atlantic salmon in the Chéticamp River. Without the lightning-fast response of Cape Breton Highlands National Park, the spawning of an entire year class could have been lost. Their fast and careful action led to them being awarded ASF's T. B. "Happy" Fraser Award on Apr 4, 2019. Photo Parks Canada
HALIFAX - Staff at Cape Breton Highlands National Park have won an Atlantic salmon conservation award for their quick response to a landslide on the Cheticamp River last May.

The Parks Canada team was presented the Atlantic Salmon Federation’s 2019 T.B. (Happy) Fraser Award at a fundraising dinner in Halifax on Thursday night.

On May 27, 2018, more than 4,000 tonnes of dirt and debris cascaded down a steep embankment inside the park, completely blocking upstream fish passage in the Cheticamp River, which has one of the healthiest Atlantic salmon populations in Nova Scotia.

With salmon staging in the estuary, ready to begin their spawning journey into the river, the Parks Canada team had a matter of days to clear the debris and return normal flows. Otherwise, an entire year’s class of salmon could have been lost.

“Within hours, the leaders at Parks Canada contacted the Cheticamp River Salmon Association and began designing a rapid response to the landslide,” Bill Taylor, president of the Atlantic Salmon Federation, said in a news release.

“It did not take long for equipment to be moved on-site and the work to begin.”

Parks Canada assembled a team with expertise in hydrology and stream bank stabilization. The team assessed the situation from the ground and the air before digging into the earthen dam created by the landslide.

“The people at the park went into overdrive and within 10 days, the material was removed from the river, allowing salmon to reach their spawning grounds,” said Rene Aucoin, president of the Cheticamp River Salmon Association.

“The Cheticamp is a beautiful, unique river, ecologically significant to the Cape Breton Highlands region.”

The Fraser award is the salmon federation’s top Canadian honour and has been given annually since 1975.

Fraser was a past president and general manager of the Atlantic Salmon Association, a predecessor to the federation. He was one of the first people to sound the alarm about the Greenland commercial fishery, which was taking more than 2,700 tonnes of wild Atlantic salmon in the early 1970s.