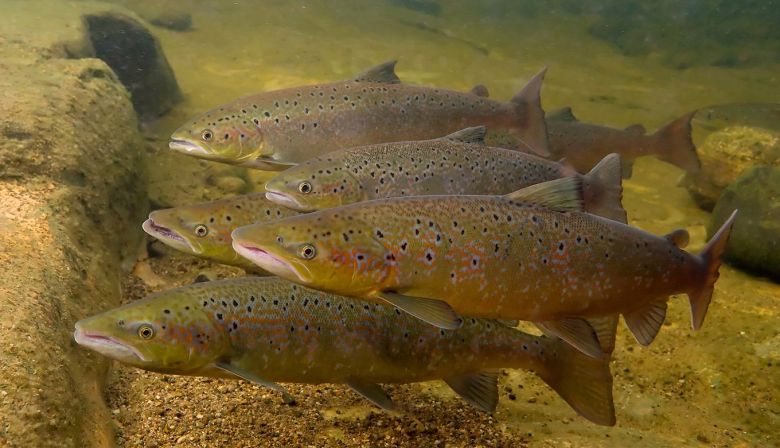 Atlantic salmon that originated in a particular stream are much more likely to produce offspring than those who have wandered in from elsewhere. Study conducted in Teno River, Finland. Photo Pekka Tuuri
WEB EDITOR NOTE: This study has important implications for study of salmon populations, and in results for restoration efforts

Salmon spawning in their home river have the edge in mating over would-be lovers born in other streams. This was the discovery of a new study examining the sex lives of Atlantic salmon in northern Finland.

The results show that the hometown heroes produce vastly more offspring than salmon trying their luck on unfamiliar spawning grounds.

“Knowledge of the sex life of salmon can help us to preserve and protect local populations,“ explains Doctor Kenyon Mobley, a researcher at the Faculty of Biological and Environmental Sciences at the University of Helsinki and one of the lead authors of the study.

The study was conducted by scientists from the University of Helsinki in co-operation with Natural Resources Institute Finland and the University of Turku. The results were published in the journal Science Advances.

Salmon are well known for their homing behavior, returning several years and many hundreds of kilometers later from the sea to the exact same spot in the river where they were born. However, some returning salmon choose to spawn in new areas. This is known as straying.

“We found that local fish have over three times more offspring than the strays, even if strays still get lucky from time to time,” says Doctor Hanna Granroth-Wilding, a researcher at the University of Helsinki and co-lead author of the study.

To work this out, the research team genetically analyzed thousands of salmon over four years in spawning grounds in northern Finland. DNA fingerprinting allowed the researchers to link parents with their offspring in order to count how many offspring each pair had.

These genetic profiles also identified which adults were locals and which were born in different streams, so the researchers could work out if locals’ breeding success was better than the strays’.

“Home ground advantage” is a phenomenon common to many sports. Local teams use subtle local knowledge to gain an advantage over their opponents and win more often at home than away.

“The sports metaphor is appropriate,” says Professor Craig Primmer from the Faculty of Biological and Environmental Sciences at the University of Helsinki.

“The cause for home ground advantage may be familiarity with the sports arena, or interactions with the fans, or a combination of these or other factors, but often it is not known precisely. The same holds true for the spawning salmon.”

“In our study, the reasons for the advantage remained cryptic. We do not find any detectable differences between the size or condition of local salmon and strays but we cannot rule out that familiarity with the environment plays a role,” Primmer explains.

“Our results support earlier studies recommending that only local stocks be used in rivers where population supplementation is necessary. Further, the home ground advantage that we found here may also benefit wild salmon by being more resilient to invasion by escapees from salmon farms,” says Mobley.

The Helsinki University authors of the study belong to the Organismal & Evolutionary Biology Research Program. You can follow the group on Twitter.

Professor Craig Primmer has received the five-year ERC Advanced Grant for his project “Age at maturity in Atlantic salmon: molecular and ecological dissection of an adaptive trait.”