Attack and distract: Dead salmon, red herrings and the magic of Gerry Byrne

Nov 23, 2019
Amid massive salmon deaths, Byrne has shown he has some tricks up his sleeve 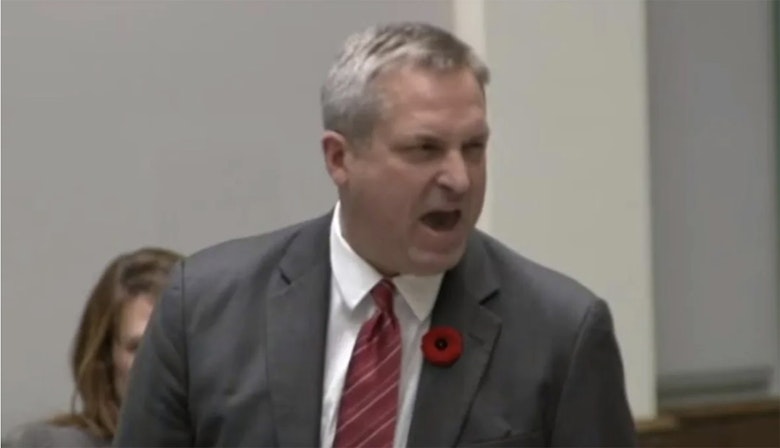 Gerry Byrne was visibly upset when he spoke about New Democrat Jim Dinn earlier this month in the House of Assembly. (CBC)
The key to all good magic tricks is what's called misdirection — that is, the art of making the audience look at one thing so it doesn't notice another.

I pocket the chosen ace of diamonds with my left hand because I've got you focused on my right.

If politics were magic, Gerry Byrne is showing himself to be a conjurer of Houdinian proportions. While the Opposition has asked specific questions about why the fisheries minister was unable to announce when he knew millions of fish were dead, Byrne's responses have turned into a dreamy "Look into my eyes, the issue is not why I kept millions of dead fish a secret, the issue is racism against our Indigenous people."

All magic tricks have instructions — spoilers of the illusion; the explanation of the mechanics of the trickery. The explanation (and spoiler) for political chicanery is Hansard: the record of precisely what was asked, and what was said.

On Nov. 6, the NDP's Jim Dinn was skeptical about Northern Harvest's claim that the massive salmon die-off was related to an "unexpected warm-water event" because one of the conditions of licence was the requirement of a plan to deal with both warm water and low oxygen problems.

Dinn: "How can the minister suggest that the event was unexpected if the high temperature issue was supposed to be in the company's plan?"

Byrne answered that he was simply quoting what professional veterinarians had told him, but there was more.

Byrne: "I have also quoted those who have direct Indigenous traditional knowledge of this area. The Mi'kmaq of the Miawpukek have said to me that climate change has a direct role in this... I would challenge this honourable member if he takes the role of our Indigenous First Nations seriously …"

The next day, Dinn had another go asking Byrne why the Mi'kmaq (like everybody else) had to wait at least three weeks after the minister knew to find out in the media that there were 2.6 million dead salmon.

I sat in the gallery watching Byrne's response, and the word that best described his tone and body language is menacing.

Byrne: "I have found a consistent practice from this honourable member, which I disagree with, is that he continues to marginalize ... and it is a pattern of behaviour. A pattern of behaviour of marginalization of Indigenous, and I will speak to that."
"Like a magician producing an endless string of handkerchiefs, Byrne has offered a number of explanations."
We now know that Byrne was referring to a closed-door meeting with Dinn and other members of the Salmonid Association of Eastern Newfoundland (SAEN) on June 5, 2018. Catch and release angling was the main item on the agenda.

In the course of the meeting (which both sides appear to have secretly recorded), one of the SAEN members said about consultations with Indigenous groups that they were at the table "because of our kowtowing to First Nations people." To Byrne's credit, he did not let the comment pass.

Byrne: "I have to take exception to what you just said, sir. There is no kowtowing to Indigenous people." Byrne asks the unidentified person to retract the remark, which the unidentified man does, saying, "I'll take that back, it was a poor choice of words."

The meeting goes on for another hour.

The important point here is that at the precise moment when Byrne finds himself under intense scrutiny about why he kept millions of dead farmed fish a secret, he suddenly exposes what he portrays as an unacceptable act of racism — 17 months after the remark was made.

Byrne's comments and conduct, of course, were noticed.

"He turned this into essentially accusing the questioner of racism. This was more than simply not answering questions about his ministry, it was a blatant attempt to create a separate issue to attack his opponents," political scientist Kelly Blidook told me.

"The House rightly voted unanimously for him to withdraw the statements after wasting two days on his foolishness. Unfortunately there were still no answers to the questions."

Just why Byrne sat on the dead fish info for several weeks only to be scooped by the FFAW is the central question that is being camouflaged.

Like a magician producing an endless string of handkerchiefs, Byrne has offered a number of explanations.

At first, it was because it was up to the company to reveal the truth.

Then the minister said it was because he did not have the regulatory authority (officials in his department have been unable to produce those regulations), and there was also, he claimed, "something called the Privacy Act" — a law that applies to individuals, not corporations.

Perhaps sensing that these explanations were under-convincing, Byrne finally said the reason he said nothing was because saying nothing was the past practice of the department.

Amidst the furor, the FFAW blowing the whistle, and CBC video showing the extent of the cleanup, Byrne has determined that saying nothing when millions of fish die will no longer be acceptable.

The magic show continued in the lobby of the Confederation Building.

The minister recorded a video of himself with his parliamentary apprentice, MHA Elvis Loveless, dutifully holding the cue cards. In his Facebook incantation, Byrne says: "To have helped set the stage for an historic meeting — province to nation, leader to leaders — will be a highlight of my parliamentary career."

There's something a little, er, fishy about the entire illusion.

Compared to a bigoted (and retracted comment) at a closed-door meeting, there are other and enormously more urgent Indigenous issues that justify inviting chiefs to speak inside the legislature: higher levels of incarceration for First Nations people, the systematic removal and placement of Indigenous children in non-Indigenous homes, or what one community in Labrador now describes as an ongoing suicide crisis.

"Has the distraction he created been effective? I would hope most observers can see it for what it is — an unfortunate political trick by a minister who seems unwilling to engage in good faith in the legislature," said Blidook, who teaches at Memorial University in St. John's.

But there is no political hocus pocus, no sleight of hand, that can conceal the blatant, wriggling contortions of a politician concocting an answer that has absolutely nothing to do with a question about dead fish.