BC open-net salmon farms on the way out, but replacement systems may differ by region

Nov 13, 2020
Feds have promised to ban open-net pen salmon farms by 2025 and move the industry to a sustainable model 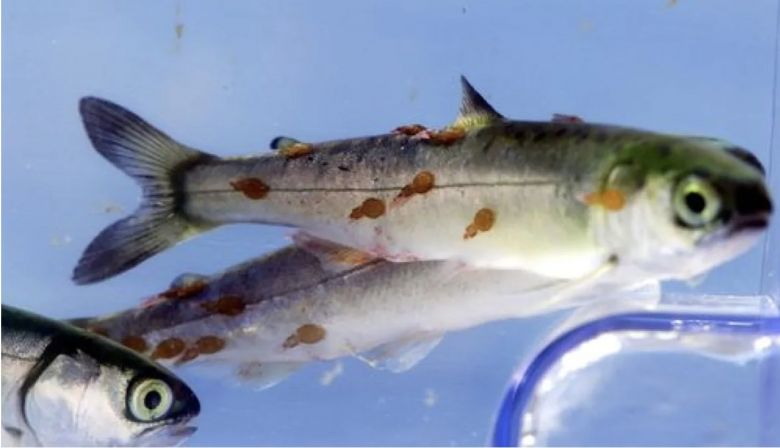 Juvenile sockeye salmon with sea lice. As few as two or three sea lice can kill these smolts. For Atlantic salmon, with larger smolts, as few as eight sea lice can kill them. Photo Alexandra Morton
The federal government's plan to phase out open-net salmon farms on the B.C. coast could result in different rules for different areas of the province.

The Department of Fisheries and Oceans says it is exploring the use of an "area-based management approach" to aquaculture that would take into account the cumulative impact of groups of fish farms in a certain area.

"We would also consider things ... specific to the area like timing windows for wild salmon that are migrating," said Allsion Web, DFO director of aquaculture management.

"We could customize the conditions of license for sea lice management to protect those wild stocks, looking at their specific timing versus a cookie-cutter approach across the province."

Open-pen salmon farming is a hot button issue in B.C.

Some scientists say the farms transfer pathogens and sea lice to wild salmon, and believe they are a factor in the collapse of B.C.'s wild stocks, especially Fraser River salmon which are returning in record low numbers this year.

Terry Beech, parliamentary secretary to the minister of fisheries, said the government remains committed to banning open-net farms by 2025 and moving to a sustainable model.

Land-based, closed-containment systems have been touted as a solution in the past. But Beech says new models of fish farming are evolving.

"There are other systems that are ocean based, I know there are hybrid systems," he said.

"Our primary goal here is to transition away from open-net pens toward more sustainable technology. What that technology is, and what best fits for British Columbia for the near future, is part of what needs to be examined."

In September, a consortium of 101 B.C. First Nations, commercial and sport fishing groups and eco-tourism operators teamed up to demand the removal of 18 fish farms in the Discovery Islands near Campbell River.

The group said the farms are a major hazard to juvenile wild salmon that have to swim past as they migrate to the ocean.

Beech said he is consulting with First Nations, the aquaculture industry and environment stakeholders on an interim report that will be ready in the spring.