Aug 16, 2019
'We can’t relocate that beaver because then it will become someone else's problem' 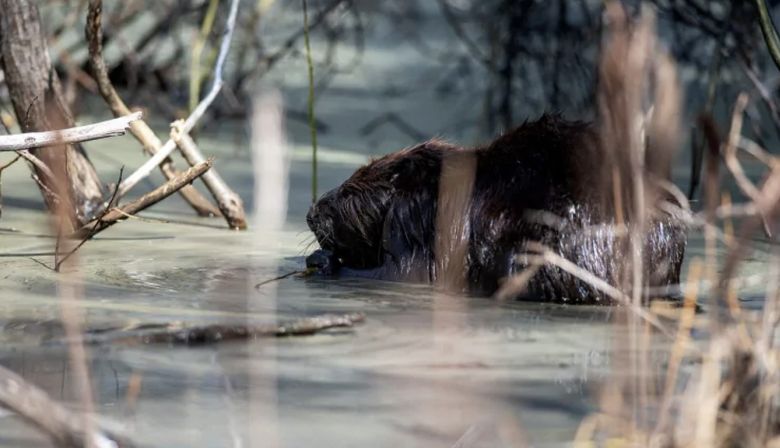 Beaver active on Prince Edward Island. Photo Brian McInnes
Making your way up Watts Creek from the mouth of the river you can find clues: debris, bundles of wood and trees "hanging by a thread."

Beavers are here — and their work is causing a problem, says the Cornwall and Area Watershed.

The group has spent weeks decluttering this particular waterway to restore the stream to its natural state and, they hope, draw endangered Atlantic salmon back to the waters.

"Most of our work has to do with rehabilitating salmon habitat in Watts Creek. Watts Creek is a very well-known salmon river," said Karalee McAskill, co-ordinator for the watershed.

"We did have some disappointingly low numbers."

Throughout Watts Creek are twigs, trees and branches piled up by beavers settling in the area. It's choked up the river in places and is not only a deterrent for salmon, but a safety risk for people as well.

Sometimes it's six- to seven-feet deep of silt and sediment and mud, it's almost like quicksand if you're stepping in it."

'That's why we're here, to rehabilitate those rivers'

Beavers can drag their bellies and create "beautiful, magnificent channels that salmon love to cruise through." Fish and other wildlife behind dams can also thrive because there's more food.

"So the beavers are actually great in one sense, but the dam is the issue," she said. "We can't relocate that beaver because then it will become someone else's problem."

The watershed met Wednesday night to determine what the next course of action should be. During that meeting they decided that the beavers may have to be trapped and harvested for meat and fur, McAskill said.

"That's why we're here, to rehabilitate those rivers for those salmon."

Salmon can thrive in other provinces with deeper rivers and streams, she said, as they can leap up waterfalls and rapids.

But some of P.E.I.'s gentle, relatively shallow waters do not offer salmon the depth or swift currents they need to push past dams built by beavers. As a result, endangered Atlantic salmon will not spawn or they'll find another area altogether, which is concerning for the watershed.

'The dam is the issue'

The beavers are settled on private property, however, so the watershed hopes to do some further assessments of the habitat as well as speak with the property owner to discuss the beaver population.

"It almost takes a little convincing because they are a keystone species. They do have the ability to do great things for salmon habitats as well," she said.