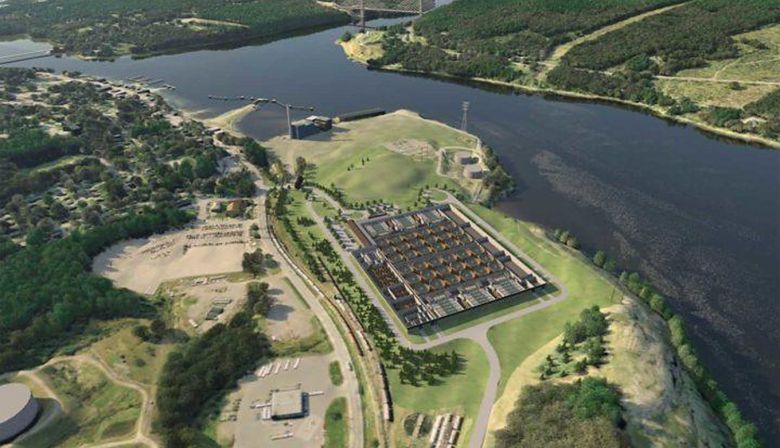 The permit from the Maine Department of Environmental Protection allows Whole Oceans to set its construction plans in motion, nearly two years after it first announced its plans to set up a land-based salmon farm along the Penobscot River at the site of the defunct Verso Paper mill.

Whole Oceans, which is planning a $180 million facility on the former mill property, on Monday received its Site Location and Development Act permit from the state.

Although construction of buildings will likely not start until the spring, the permit — the last of nine local, state and federal approvals the project required — marks a watershed in Bucksport’s climb back from the loss of the Verso mill, and 570 jobs, in 2014. Expected to go online in 2022 and begin selling fish two years later, the farm will employ as many as 75 people in its first phase.

The mill site’s owner, American Iron and Metal, has been preparing the site for Whole Oceans for almost a year. Since it acquired the mill site in 2015, the company has demolished more than 1 million square feet of building space. It sold about 100 acres to Whole Oceans in May.

The company is “free now to do site work if they don’t want to wait,” Lessard said Monday.

The farm’s jobs will pay anywhere from $15 to $18 per hour at the lowest level. The company will start training its Bucksport workers at a salmon farm on an island off British Columbia in the spring, including as many local people as possible, company officials have said.

The company’s application for its Bucksport building permit, which it received in September, called for earth work on 22 acres of the site to start in November. That work, estimated to cost about $6.5 million, would include demolishing paper mill foundations, piping and storage tanks to make way for the company’s proposed Freshwater Building.

Construction on that 90,000-square-foot building would begin in April 2020, according to the permit application, and finish six months later in October 2020. The Freshwater Building is where Whole Oceans plans to hatch salmon eggs and raise the young fish to 10 months of age. The building will also house offices.

Construction of a second structure, called the South Grow-out Building, is scheduled to take 12 months starting in October 2020. It will house large recirculating aquaculture systems and supporting infrastructure to raise the salmon to a size suitable for sale. Recirculating aquaculture systems flush seawater through large fish tanks. Warehouse space for fish feed will also be located in this 350,000-square-foot building.

If Whole Oceans’ operation in Bucksport later expands, the company will build the North Grow-out Building, possibly in 2025 or 2026. At 350,000 square feet, it will mirror the South building, according to the application.

This story appears through a media sharing agreement with Bangor Daily News.