Calls grow for DFO to focus on St. Marys River

Jun 12, 2020
Advocates say St. Marys River would be better use of resources for DFO in tracking Atlantic salmon, than money spent on LaHave 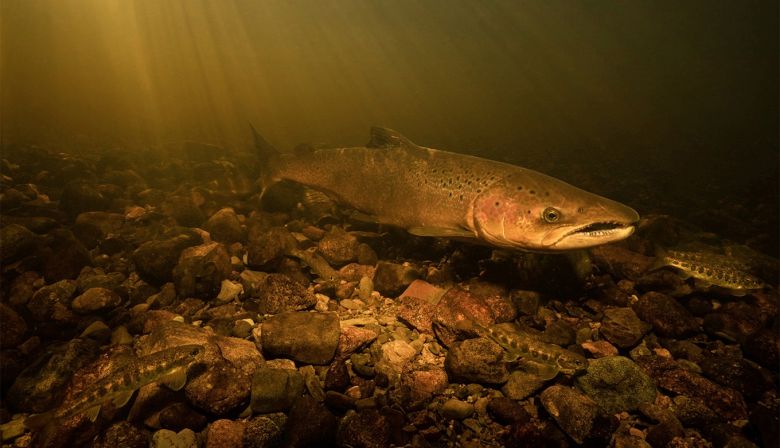 Large salmon and precocious parr St. Mary's River. Photo Nick Hawkins and Tom Cheney
The Department of Fisheries and Oceans is considering deploying sonar in one of Nova Scotia's historic salmon rivers amid signs the iconic fish is hanging on in the St. Marys River after a decade-long ban on angling.

Sonar uses sound waves to detect objects. It's being used to count Atlantic salmon in New Brunswick and could confirm a comeback is underway — or expose it as wishful thinking in Nova Scotia's longest river.

"We see them, we see them under the bridges, we see them jumping in the evenings. They are in the estuary now. With low water right now, there's a run ready to come up. We know they're there."

Finding out how many adult salmon return to spawn is key to understanding whether the population is healthy enough to reopen the river to angling, which is one of the association's goals.

DFO stopped counting adult salmon in the St. Marys River as part of budget cutting during the Harper era.

Instead, DFO focused monitoring efforts on the LaHave River, which runs from Annapolis County to Lunenburg County, where it empties out into the Atlantic Ocean.

Returning adult salmon are still counted and the LaHave is now considered representative of the health of Atlantic salmon throughout the southern uplands of Nova Scotia, Raab said.

If one drew an imaginary line from Canso to Kentville, everything below the line would be classified as the southern uplands.
Dire situation in the LaHave

While salmon persist in the St. Marys River, the situation is dire in the LaHave.

According to the DFO stock assessment, adult returns were the lowest on record last year. In 2019, only 11 large salmon were counted.

Less than one per cent of salmon that go to sea survive to return.

That led to calls for DFO to bolster monitoring on St. Marys River, which is under less development pressure, less susceptible to acid rain and almost entirely free of invasive species.

"It's not that I want to write off the LaHave, there is still a salmon population," said Kris Hunter of the Atlantic Salmon Federation, an advocacy group.

"But it doesn't make sense to me that your best chance of recovery, probably some of your largest populations in the province and you're putting all your effort somewhere else. We'd like to see a shift in focus there."

"In the southern uplands, the St. Marys is obviously the choice of rivers in this area. We have the highest population of salmon and the best chance of recovery," he said.

Asked about getting back to counting adult returns on the St. Marys River, Raab said he thinks it would be great.

"DFO is always trying to explore new methods and new technologies to try to get a sense of the places where we don't yet have numbers or an answer," he said.

"As we see cause for alarm, at least on [the] LaHave River at such low numbers, it would be good to have additional rivers to confirm or counter what those trends are."

It's currently in the middle of a three-year habitat restoration program paid for with a $1.8-million grant from the federal government.

The Nova Scotia Nature Trust has protected 23 kilometres of shoreline thanks to donations from landowners.

The provincial government is considering protecting 684 hectares in Guysborough County near the St. Marys River that includes woodlands, lakes and several small wetlands in the watershed of Archibald Brook.

Looming over restoration efforts is Atlantic Gold, a proposed open pit gold mine at Cochrane Hill, which is owned by an Australian mining company.

The site is very close to the St. Marys River.

In a reference to the silvery salmon, some locals are campaigning against the mine with the slogan, "Silver is more precious than gold."