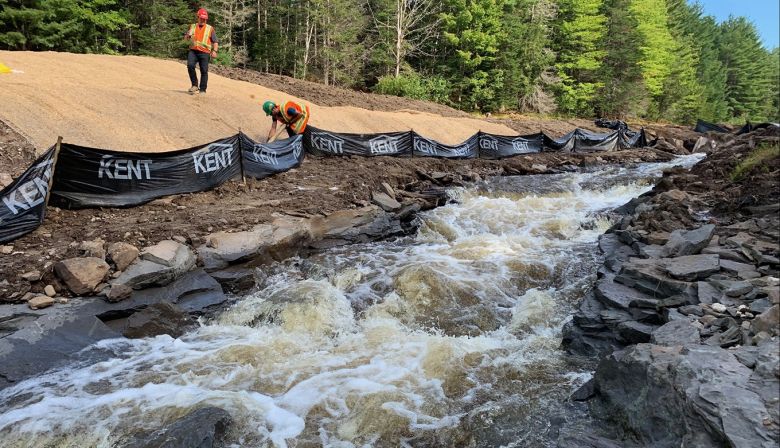 Campbell Creek dam has been removed and the creek now flows freely into the Nashwaak River. Nathan Wilbur/ASF
For the first time in more than a century, Campbell Creek on Fredericton's north side is running freely.

Crews have worked since August to remove a 100-year-old dam from the creek, a tributary of the Nashwaak River, in the hopes of returning the waterway to its natural state.

"It was an incredibly gratifying thing to witness," said Natalie Deseta, project co-ordinator at the Nashwaak Watershed Association, one of the conservation groups working on the project.

The concrete dam was built in 1919 and powered the cotton mill in Marysville for decades. It was eight metres high and 75 metres long. Since the Cotton Mill closed in the 1970s, the dam had been deteriorating, and in 2014, it was deemed structurally unsafe and a public safety liability. Efforts to have it removed began in 2016.

"One of the underpinning factors [of the project] has been to create greater landscape connectivity by removing the dam in order to enhance habitat for species at risk such as Atlantic salmon and American eel," said Deseta.

Deseta said there are positive signs that salmon will soon be making their way up the creek once again.

"We did electro fishing in order to rescue fish several times during this process and found salmon parr downstream of the dam," she said. "So we know that the salmon are waiting to get upstream now that the free flow of the river has been restored."

Aruna Jayawardane is the science director with the Maliseet Nation Conservation Council, another partner on the project.

"There's no doubt that actually they could really start to go upstream of the creek for spawning," he said.

Jayawardane said the purpose of the restoration of the creek is more than ecological, referencing the historical significance of the area to the Wolastoqey.

"The removal of Campbell's Creek dam is very important," he said.

"Number one, from our perspective, when it comes to a historical kind of importance of that river, as well as salmon is a critical species for the culture of the Wolastoqey people," he said.

On a sunny September day, an excavator removes the remaining culverts and crews are planting trees along the banks of the creek. Just last year, it was a head pond.

Deseta said they're planting about 3,000 trees that would be native to the area such as white and yellow birch, red oak, eastern white pine and red spruce.

"We are aiming not to over-engineer the process of the recovery of the ecosystem," she said.

"We're assisting the restoration and the ecological recovery as best we can… We're hoping that it will regenerate fairly quickly. That said, a mature forest takes at least 80 years to get going so we're playing the long game for this project."

The dam itself has been buried in the banks of the creek.

"We had to put it somewhere," said Deseta.

It was tested for toxins and undesirable heavy metals to make sure it would be safe to bury.