Oct 17, 2019
A Canadian aquaculture firm that raises Atlantic salmon in pens along the Maine coast will pay more than $150,000 to fund a wild salmon restoration effort following multiple violations at fish pen sites it operates.

As part of a consent agreement with the Maine Department of Environmental Protection, Cooke Aquaculture has agreed to pay $156,213 to fund the Marine Rearing Atlantic Salmon Machias River Project, which aims to breed and restore native populations of Atlantic salmon in the Machias River.

The Department of Environmental Protection cited Cooke for multiple violations at salmon pen sites that Cooke leases and operates in Hancock and Washington counties, according to information the state agency released Tuesday.

Cooke violated its operating permit by having too many fish in one or more pens, failing to conduct environmental sampling, and failing to follow a variety of clerical procedures that include timely filing of complete and accurate pollution sampling reports and timely submissions of fish spill prevention plans. The infractions violated the terms of Cooke’s operating permit, DEP rules and state law.

As part of the agreement, starting in 2021 Cooke and the Maine Department of Marine Resources will raise approximately 900 native salmon that later will be released in the Machias River. Cooke will partner with DMR and other entities to construct, operate, monitor and maintain the net pens where the Atlantic salmon will be raised to adult stage, prior to their release into the river.

“While net pens are not new in Maine, utilizing net pens for conservation goals is a relatively new science-based idea that is showing promise in the Bay of Fundy through the Fundy Salmon Recovery partnership,” Cooke spokesman Joel Richardon said Wednesday. “The disappearance of [wild] Atlantic salmon poses a real environmental issue and threatens the culture, history, and economy of Maine and Indian tribal communities.”

As part of the consent agreement, Cooke also will submit to the state net-pen plans and staff training plans on proper sample collection, handling, preservation, analysis and documentation, Richardson said.

The consent agreement is unrelated to allegations of animal cruelty at a fish hatchery owned and operated by Cooke in Bingham. Those allegations, prompted by an undercover video recorded at the facility by an animal welfare group, remain under investigation by the state Department of Agriculture, Conservation and Forestry. 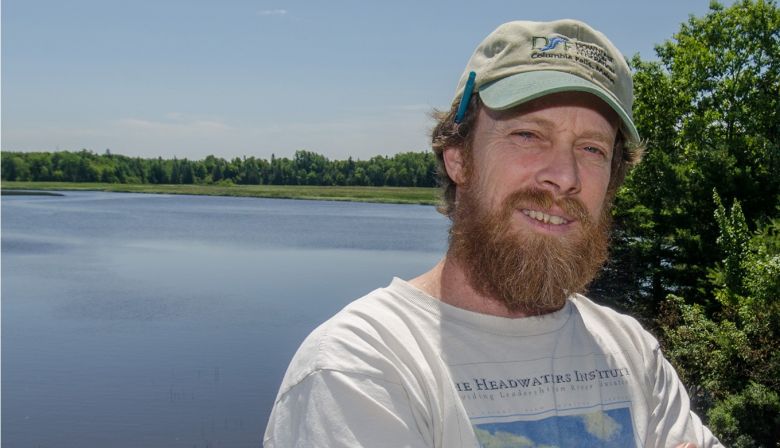 Dwayne Shaw, Downeast Salmon Federation. Tom Moffatt/ASF
Dwayne Shaw of the Downeast Salmon Federation — which has publicly welcomed Cooke’s involvement in restocking efforts but also raised concerns last month about an escape of salmon from a Cooke site in Passamaquoddy Bay — said Wednesday that his group has been involved in planning the restocking effort in the Machias River.

“It is important to us that this settlement fund is directed to wild salmon restoration and experimentation in Washington County,” Shaw said. “It is clear that Cooke has work to do in addressing their compliance with the rules governing aquaculture, and we are encouraged to see Maine DEP and Maine DMR monitoring and enforcing the rules that we fought so hard to have put in place.”

The Machias River stocking effort is separate from a similar program aimed at restoring salmon in the East Branch of the Penobscot River with which Cooke is also involved.

In that project, Cooke will raise approximately 5,000 young native salmon in pens off Cutler that later will be transferred in the fall of 2021 or 2022 to the watershed of the East Branch of the Penobscot River, which has a large amount of high-quality salmon habitat, according to the Department of Marine Resources.

The East Branch restocking project, most of which will be funded through a $1.1 million federal grant, is a partnership between the state, Cooke, the U.S. Fish and Wildlife Service, the National Oceanic and Atmospheric Administration, and the Penobscot Indian Nation.