Apr 9, 2020
Company says it could not find 15-20 sites needed to justify moving into province 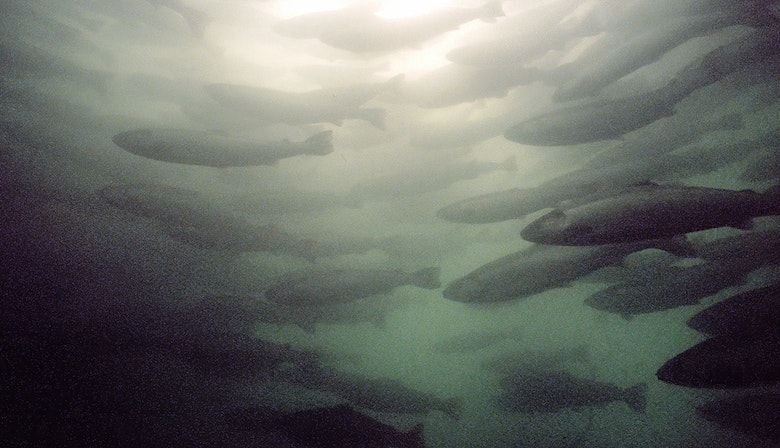 Cermaq, a subsidiary of Mitsubishi, has decided not to pursue a set of cage sites in Nova Scotia. Through issues of escapes, disease, parasites, and interbreeding, marine cage farmed salmon risk the future of wild Atlantic salmon. ASF Photo
Norwegian salmon farming giant Cermaq is abandoning its controversial expansion into Nova Scotia.

On Thursday, the Mitsubishi Corp. subsidiary said it could not find suitable locations for the 15 to 20 farm sites it needed to justify a move into the province.

"Unfortunately, we were unable to locate enough sites at this time, and have made the decision to allow all of our options to lease to expire," David Kiemele, managing director for Cermaq Canada, said in a news release.

The decision comes one year after Kiemele and other officials from the company's Canadian headquarters in British Columbia unveiled the proposed expansion at a media event in Halifax.

The business case was based on annual production of 20,000 tonnes of farmed Atlantic salmon in open-net pens at six locations around Nova Scotia, and included a processing plant and hatchery.

The company said it would spend $400 to $500 million to reach full capacity over five years.

It also said it would not proceed without community support.

Instead, the proposal generated vocal opposition in communities where the province of Nova Scotia had awarded Cermaq an option to lease, a first step to select specific sites for fish farms prior to a full application.

Critics objected to pollution generated by fish farms, citing salmon feces and chemicals. Cermaq, which operates fish farms in British Columbia, said it strives to keep its fish and the environment healthy.

In the face of opposition, the province extended the option period — most recently because of the COVID-19 pandemic.

"We did hear opposition from some groups and regions, however; a shared path forward is, and always was our goal," Linda Sams, Cermaq Canada's sustainable development director, said in a release.

"We engaged with the intent of supporting, or benefiting, existing commercial fishing through shared opportunities, services, research and planning.

"We think it was a lost opportunity that we didn't get to have more in-depth conversations in some locations, but we would like to thank everyone who engaged with the intent to learn and share."

The prospect of fish farms in Mahone and St. Margarets Bay triggered a firestorm of opposition, which included a sophisticated social media campaign and one-sided public meetings.

The company did receive support from Nova Scotia Mi'kmaq and their fishery leader, Chief Terry Paul, who said he was won over to fish farming after visiting Norway.

"Well, I used to share those concerns, until I got educated myself on the industry," Paul told CBC News in February.

Cermaq specifically thanked the Assembly of Nova Scotia Mi'kmaq Chiefs for the opportunity to "engage, share and learn."

The company said in the coming weeks it will wrap up the feasibility work and close its Guysborough office. All public engagement, including the community information advisor committees, will stop effective immediately.

Meanwhile, Cermaq competitor Cooke Aquaculture said Thursday it is proceeding with its plans to expand in Nova Scotia.

The New Brunswick-based company operates 12 fish-farm sites in Nova Scotia and is seeking government approval to expand its Liverpool Bay site on the South Shore of the province.

"Our aim is to grow responsibly in Nova Scotia. And this means modest expansion, putting fish health and environmental sustainability at the forefront of our growth strategy," Joel Richardson, vice-president of public relations for Cooke Aquaculture, said in a release.