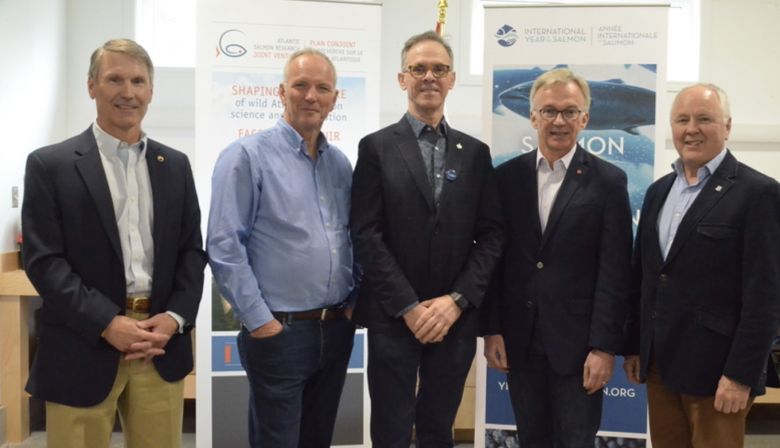 A two-year plan to implement the federal government's Wild Atlantic Salmon Conservation Policy announced Monday will include projects done by four organizations under the Atlantic Salmon Research Joint Venture, which was started in 2016.

Areas studied will cover ocean tracking, locations and causes of at-sea fish mortality and how climate change impacts fish fitness and survival, along with species predation and competition.

"It's about strength in numbers," Taylor said following the announcement at the Fisheries and Oceans Canada science field station in South Esk, west of Miramichi.

"Now we have a plan in place and timelines to gain traction on some conservation and restoration work that needs to be done."

The research joint venture consists of experts from the Department of Fisheries and Oceans (DFO) along with Indigenous groups, provincial agencies, non-government organizations, academic institutions and other stakeholders.

The venture's goal is to share scientific information in effort to reverse the declining salmon population trend, said DFO in a news release.

Three years ago, the federal government allocated $600,000 to the venture, with $360,000 of that amount being spent on academic and First Nations projects.

Roughly $250,000 was set aside from the original allocation for the Atlantic Salmon Federation's monitoring program for migration routines, fish behaviours and causes of high mortality, and $50,000 was earmarked for the research joint venture.

One of the research projects unveiled Monday by Charlottetown MP Sean Casey, the parliamentary secretary to Fisheries and Oceans Minister Jonathan Wilkinson, is the salmon federation's effort to follow how fish migrate while at sea.

The federation will tag salmon caught off Greenland during the summer to gather that data.

Another project will involve researchers from Acadia University in Wolfville, N.S. studying how salmon survive and where they travel after spawning in their home rivers. This will be achieved by tracking fish from an inner Bay of Fundy river in Nova Scotia.

Experts at the University of New Brunswick in Fredericton will also look at how salmon diets have changed over a SO-year period by analyzing the chemistry and isotopes of scales gathered throughout the past five decades.

No government funding was committed at Monday's announcement.

Casey said the four organizations can access money from the joint research venture, along with the Canada Nature Fund geared towards at risk species and the $325-million Atlantic Fisheries Fund that's co-funded by Ottawa and provincial governments.

He said the feds' conservation policy will be implemented with support from provinces, Indigenous communities, watershed associations, angling groups and other partners.

Casey also said the salmon federation, UNB, Acadia and Dalhousie must report back to Parliament and update DFO on their progress.

"(The projects are) essentially putting everything in one place through all parties discussing with one another what needs to be done now," said Casey.

Taylor and Mark Hambrook, president of the Miramichi Salmon Association, said they hope the research projects will bode well for conservation efforts in the Miramichi River system.

There were 27,400 salmon spawners that plied the Miramichi last year. That's increased from the estimated 26,900 that returned to the river in 2017. DFO has said salmon populations in the Miramichi River peaked at 116,000 in 1974.

"Scientists around the North Atlantic region will tell us that the No. 1 issue impacting all Atlantic salmon today is poor survival at sea," said Taylor.

"It's better to be part of the solution than to simply propose a solution," he said.