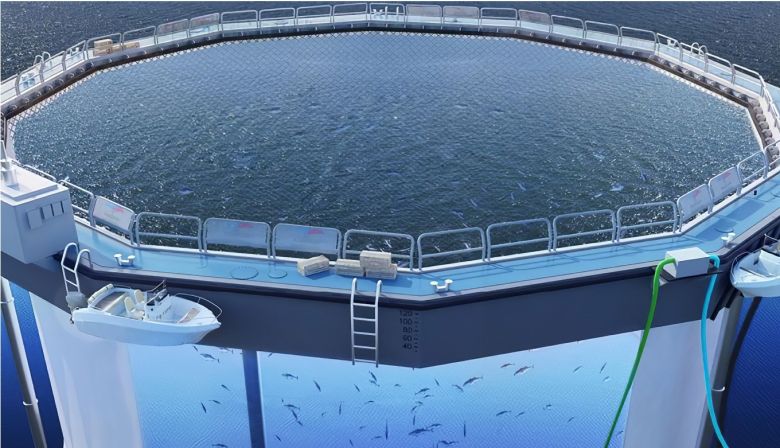 Type of cages American Aquafarms hopes to deploy in Frenchman's Bay
Opponents of a proposed Atlantic salmon farm in Frenchman Bay predict fish waste from the aquaculture facility would hurt the environment, and last week sent the state oceanographic studies they say back up the claim.

Frenchman Bay United, a coalition opposed to a proposal by Norway-based American Aquafarms to build the facility, submitted the models as part of the Maine Department of Environmental Protection's process for permitting wastewater discharge applications, according to a news release.

One model was developed by Chris Kincaid, a physical oceanographer from University of Rhode Island’s Graduate School of Oceanography Coastal Hydrodynamics Lab.

Another model was developed by Lauren Ross, assistant professor of civil and environmental engineering and faculty fellow at the U.S. Sen. George J. Mitchell Center for Sustainability Solutions at the University Maine.

The 3D models, designed to predict transport of water and currents over time, concluded that waste from the farm would concentrate around and between sites due to gyre circulation patterns, and would travel throughout the upper bay, according to the release.

A separate document noted the results of the modeling projects haven’t been validated.

American proposes to lease two sites between Bar Harbor and Schoodic Peninsula to install 15 “closed pens” plus an operations barge at each site, with the goal of eventually producing 30,000 metric tons, or 66 million pounds, of salmon annually.

“This project will be an environmental and economic disaster for Maine,” said Henry Sharpe, president of Frenchman Bay United.

In its submission to MDEP, the group also said the operation should be regulated as a solid waste facility on the water. Other concerns included what it said is the potential for mass mortality events; discharge of disease; discharge of diesel fuel stored at the pen sites; and air, noise and light pollution.