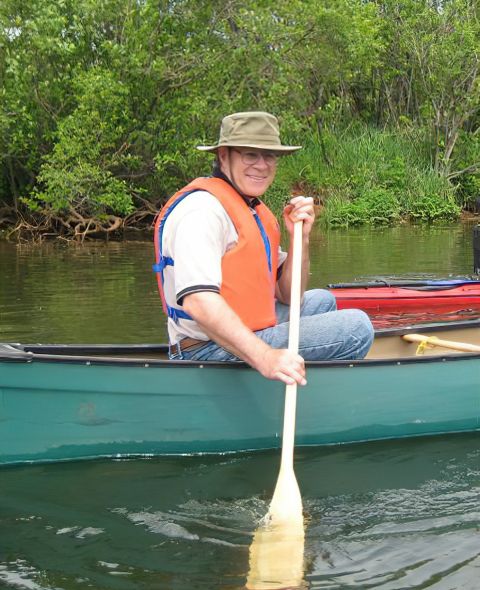 Daryl Guignon in 2008 at time of his retirement. Photo Diane Griffin
With the passing of Daryl Guignion on Feb. 8, 2021, Prince Edward Island has lost one of the greatest advocates for environmental conservation in the province, say those who knew him.

“As a university professor, he educated many about the importance of our environment. Because of his influence, teachers and other professionals brought environmental concerns to younger generations and to Islanders at large," said Rosemary Curley of Nature P.E.I. His students went on to positions of influence in university faculties, environment departments and non-governmental organizations throughout Canada.

“A strong advocate for Atlantic salmon conservation, erosion control, and natural areas, Daryl mentored many Islander," said Dan McAskill, president of Hillsborough River Association. “He was one of our foremost spokespersons for watershed conservation on P.E.I. and media sought his comments on the prevention of watershed problems.”

Guignion understood that conservation meant wise use of our environment and he constantly spoke and acted for the province's natural resources. His free time was often spent helping organizations committed to river restoration, and he assisted hunters and trappers with problems. He was a founder and the second president of the Island Nature Trust, set up to protect habitat on the Island through land acquisition. He was also a founder of the Morell River Management Cooperative. As a former president of the P.E.I. Wildlife Federation and a board member of the Canadian Wildlife Federation, his advocacy and influence was felt beyond the university and immediate community. He operated at the policy level as well as the practical “hands on” level to get things done. For his efforts he received many awards including the Hon. J. Angus MacLean Natural Areas Award, National Recreational Fisheries Award and the Prince Edward Island Environmental Award.

Sen. Diane Griffin, who was a student in the first class taught by Guignion said, “I believe that Daryl is an example to us all by what he did in a positive way to maintain our natural world, perhaps more than any other individual in the province.”

He was an inspirational teacher, and UPEI students awarded him as Faculty Member of the Year. With his tremendous knowledge, pleasant, easy-going manner, and sense of humour, he was always in demand as a popular speaker.

In honour of Guignion and his colleague, Dr. Ian MacQuarrie, former students established the Daryl Guignion and Ian MacQuarrie Graduate Scholarship in Science at UPEI to assist students in ecological and wildlife studies. While donations are still being sought, several students have received scholarships to date.