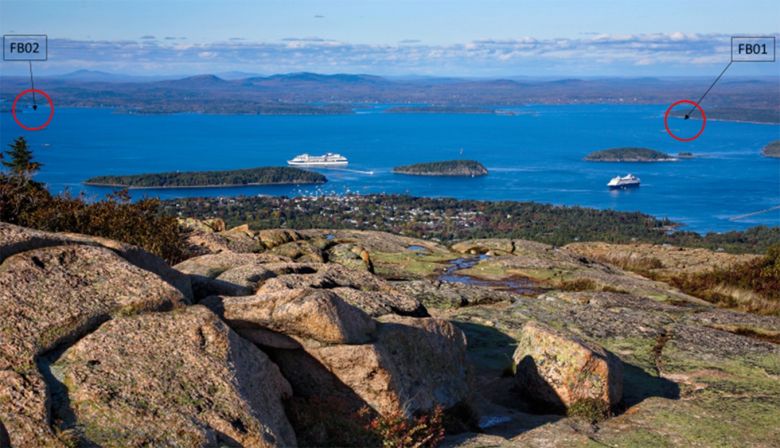 Looking across Frenchman Bay to the two proposed salmon farm sites from Dorr Mountain, above Bar Harbor, in Acadia National Park.
AUGUSTA — The Maine Department of Environmental Protection’s will and capacity to adequately appraise American Aquafarms’ proposed plan to discharge a combined 4.1 billion gallons of diluted wastewater daily from both the Norwegian-backed company’s two 15-pen sites in Frenchman Bay were questioned during a 2.5-hour public meeting held online by the state agency Thursday night.

The scientific studies and analysis underlying the industrial-scale project also were disputed and independent scientific data, which paints a different picture, submitted.

During the Zoom meeting, more than 40 citizens as well as representatives from Acadia National Park, Island Institute, Friends of Frenchman Bay, Frenchman Bay United, Protect Maine’s Fishing Heritage, the Sierra Club, Maine Natural Resources Council and other groups registered their view about American Aquafarms’ completed wastewater discharge permit applications for two proposed 60-acre sites near Bald Rock Ledge and off Long Porcupine Island. Listening to the unanimous opposition were DEP Commissioner Melanie Loyzim, Deputy Commissioner David Madore and other DEP staffers. No one spoke out verbally in support of the project. The DEP has received and is still taking written comments about the applications.

In its plan, American Aquafarms incorporated Norway-based Blue Ocean Technology’s wastewater treatment system, which is specifically designed for fish farming. Company officials estimate the system would capture 90 percent of the fish feces and residual nutrients from fish feed, which fall to the bottom of the floating pens and are contained in polymer-membrane cloth sacks.

The waste is pumped up from the ocean floor and solids compacted in an attached filtration unit. The compacted waste would be transported by barge to the mainland.

From each 15-pen site, an estimated 0.18 million gallons of the filtered wastewater would be discharged daily into Frenchman Bay.

Hired by American Aquafarms, in the fall of 2020, Portland-based Ransom Consulting Engineers and Scientists conducted manual and remote sensor testing in Frenchman Bay, which is about 15 miles long and 7 miles wide, to project potential environmental impacts of the proposed salmon farm’s use and release of seawater there to raise 66 million pounds of Atlantic salmon annually.

Ransom studied the discharged water’s dispersal, dilution and drift over time in the entire bay. The Cormix computer model, statistical techniques and other tools were used to analyze the hydrologic data and predict outcomes inshore and in distant reaches of the bay. Ransom concluded the daily discharge of filtered seawater would be diluted a dozen times in Frenchman Bay.

Both scientists used their own 3-D models to track tidal water movement and currents over time in Frenchman Bay. Independently, both found that the diluted wastewater would remain rather than exit the bay into the open ocean. The wastewater would stay in the bay’s upper reaches and release nutrients to shallower waters.

“Waste will not flush from the bay,” Sharpe told the DEP during his allotted 3-minute comment time. Instead, he said the effluent will concentrate, release nutrients and threaten the area’s aquatic ecosystem.

American Aquafarms’ proposed use of Ecomerden AS’s Eco-cage system was another cause of concern. Designed by Ecomerden founder Jan Erik Kyrkjebø, who is a senior advisor on American Aquafarms’ management team, the semi-closed, rigid aluminum-collared cages resemble floating ponds.

Five years ago, Ecomerden’s Eco-cages were first tested and their subsequent commercial use has been limited to several Norwegian salmon farms. Primarily, the cages have been used as an intermediary step to grow out juvenile fish. The design has yet to be used commercially elsewhere in the world.

Dana Younger of Sorrento was among the citizens who couldn’t fathom how emerging technology with such a limited track-record was even contemplated for Frenchman Bay and elsewhere in Maine.

“What’s the actual impact?” he asked the DEP officials in attendance. He said Frenchman Bay communities and their natural resources were being used as “guinea pigs with unknown short- or long-term impacts.”

Schneider said 2021 visitation is expected to reach a record 4 million visits by year’s end. He says Frenchman Bay is integral to the Mount Desert Island and Schoodic region’s landscape and visitor experience. He says the project’s sheer size – equal to 15 football fields – and any degradation of its natural resources – such as water quality – would have serious consequences.

“DEP ought to incorporate risk management. You’ve got to think about [what happens] if this goes sideways. Who is going to be left holding the bag?” another speaker, Patrick Wilson, asked.

Blue Hill resident and Friends of Blue Hill Bay member Robert Bauer and others asked why such large, ocean-based aquaculture ventures are not required to have a wastewater treatment plant operator as similar land-based fish farms are to monitor closely water quality and prevent degradation.

Frenchman Bay residents, who make their living in the inlet, also spoke out. Among them was Sorrento fisherman James West, who has lobstered and scalloped in Frenchman Bay and the specific areas where the salmon pens would be located for 42 years. He sees American Aquafarms as detrimental to existing fisheries, but also to the juvenile lobster resource and the inshore shrimp and groundfish nurseries.

“It’s just a big accident waiting to happen. I am still shocked that we are talking about it,” West said.

He also questioned whether DEP is adequately staffed to monitor such a large operation rigorously.