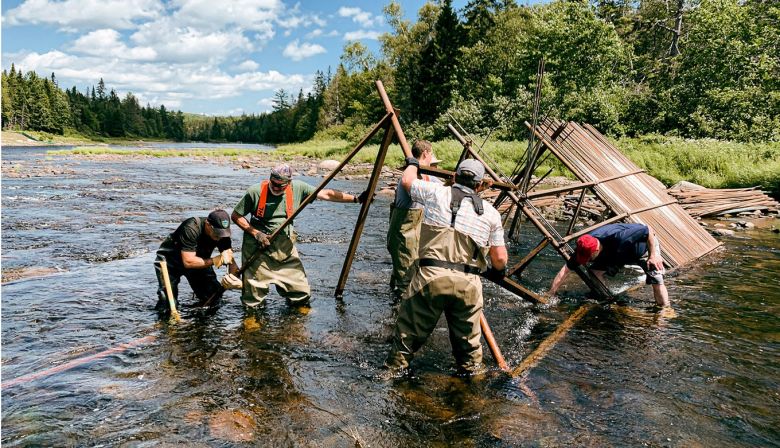 A spokesperson for Fisheries and Oceans Canada (DFO) says the department won't be revoking its approval for the project, while a member of the Working Group on Smallmouth Bass Eradication in the Miramichi says options for advancing the project are being considered.

In a letter to Fisheries and Oceans Minister Bernadette Jordan, Barb Hildebrand wrote that camp owners continue to have "grave concerns" about the working group's effort to treat the lake, Lake Brook, and part of the Southwest Miramichi River with a piscicide that contains rotenone.

The working group - consisting of Indigenous groups and non-governmental organizations - paused the project after protests ensued on the lake by members of Neqotkuk (Tobique) First Nation, as well as the Connecting to the Land group.

"The approved project is significantly different from the project proposal that we were provided," Hildebrand wrote in her letter on behalf of the cottage owners' ad-hoc committee.

"Wouldn't such a change in project objectives and outcomes require amendment or resubmission and invalidate the preceded review, engagement and consultation processes?"

In an emailed statement to the Miramichi Leader, Hachey said the project got the go-ahead "following the completion of a provincial environmental impact assessment review and consultations with Indigenous communities."

"The provincial assessment is administered in a way that gives the public, stakeholders, and First Nations the opportunity to learn about and comment on proposed projects," he said. "In addition to the provincial assessment, the proponent, the Province of New Brunswick, and DFO had numerous exchanges with the cottage owners on this proposed project."

The smallmouth bass are believed to have been introduced illegally to the lake around 2008. They were contained by a barrier before some escaped in 2019 and ended up in the river.

Conservationists have long been calling for action to wipe out the species, which isn't native to the Miramichi and is considered a threat to the river's wild salmon populations. However, some cottage owners remain opposed to applying a chemical containing rotenone to the lake, brook, and river, citing

environmental concerns and what they consider as a low likelihood of successful eradication.

The working group's plan was to treat the 220-hectare lake, five-kilometre brook, and 13.6 kilometres of the river simultaneously starting Aug. 17. The river and brook would be treated a second time in mid-September.

In addition to requesting the DFO to rescind its regulatory approval of the project, Hildebrand asked for a "meaningful engagement process" on a "new proposal to control, rather than eradicate, smallmouth bass.

"If control is the new objective, then there are non-toxic mechanisms to address that objective," she wrote.

'There are no alternatives'

Working group spokesperson Neville Crabbe said the group and regulators are currently pursuing "whatever amendments are necessary" to carry out the project. He said members haven't seen any indication of their authorization being cancelled.

"I think regulators understand the difficult situation we've been put in by circumstances beyond our control," said Crabbe. "The indications we have are that they're willing to work with us to help facilitate the safe and effective completion of this project."

Despite as many as 9,000 smallmouths being removed from the lake, Crabbe said previous angling and electrofishing efforts turned up multiple age classes. He said a chemical treatment was the only option identified "through an extensive analysis" in 2017 deemed to be "safe" and having "any reasonable likelihood of success."

Crabbe said other options included de-watering, introducing a predator, genetic manipulation, and installing an impermeable barrier at the brook.

''.All of those carried their own risks and were highly unlikely to be effective," he said. "Not doing this project is surrendering the Miramichi to an invasive species. There are no alternatives."

Crabbe said the project was reviewed by a combined 10 federal and provincial departments and agencies, and 16 permits were obtained. He said broad consultations also took place with Indigenous groups and cottage owners as part of the approval process.