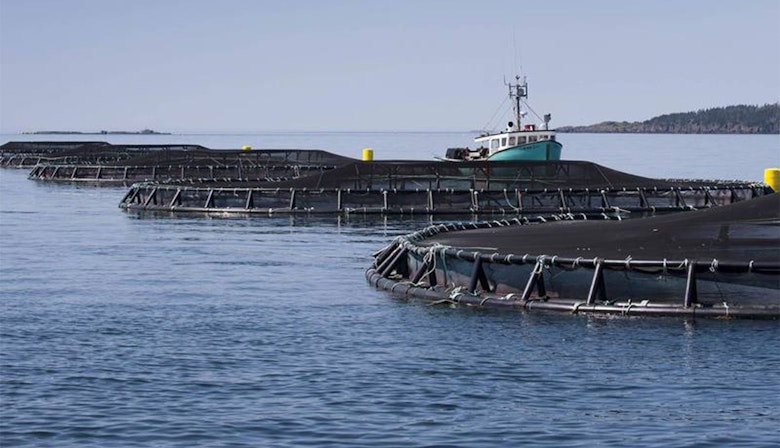 Cooke Aquaculture cages on the Nova Scotia coast.
Oh, to be a fly on the wall. Or a bug on the line.

Because you can only imagine that provincial Liberal officials in Atlantic Canada are in a lather, busily phoning the federal Liberals over a campaign promise made about the other side of the country. Released on Monday, the Trudeau Liberal campaign platform includes this pledge: “In British Columbia, we will work with the province to develop a responsible plan to transition from open-net pen salmon farming in coastal waters to closed containment systems by 2025.”

You can understand why that might be making Newfoundland and Labrador Premier Dwight Ball and his cabinet, among others, nervous.

Timothy Kennedy, president and CEO of the Canadian Aquaculture Industry Alliance, put it like this: “This is a reckless policy, not grounded in science, and it will threaten good, middle-class jobs across Canada.”

Right now, it’s only a platform policy for British Columbia.

Even federal Liberal candidates aren’t necessarily onside in this region. Here’s Liberal MP and current candidate Karen Ludwig from New Brunswick, talking to the CBC: “When we look at where science is at, I don’t believe — from what I’ve researched and heard — that science is at this stage where ... we can quickly make a transition to closed containment.” At least one Newfoundland MP feels the same way.

You can be sure that the Newfoundland and Labrador government feels the same way, as it prepares for a massive new open-pen facility in Placentia Bay, and for a former provincial Liberal candidate launching an aquaculture service centre in Marystown. The provincial government has put money into both ventures.

But the other side of open-pen aquaculture is also here: escaped farmed salmon are breeding with and sometimes supplanting wild stocks, and there have been disease outbreaks and massive salmon die-offs in several open-net pen facilities in the region. Washington State has already banned open-pen Atlantic salmon farms, and several jurisdictions are pondering similar moves.

Instead, more and more attention is being placed on the other part of the Liberal platform pledge: closed containment systems, or recirculating aquaculture systems (RAS). RAS farms are on land, and fish are raised in tanks, limiting disease and parasite outbreaks.

The issue with that technology for this region? Even if it were already a full commercial success (it may be soon), there’d be no reason to raise fish in an area as remote as Newfoundland and Labrador or Nova Scotia. You’d build a facility far closer to market.

Right now, the Trudeau promise only affects B.C. But, by making it, the federal Liberals are implicitly saying there’s a problem with open-net aquaculture. They may be right. But you can be sure provincial governments in this part of the country are in a tizzy.