Emails reveal 100,000 salmon die-off not reported for 2 weeks to DEP 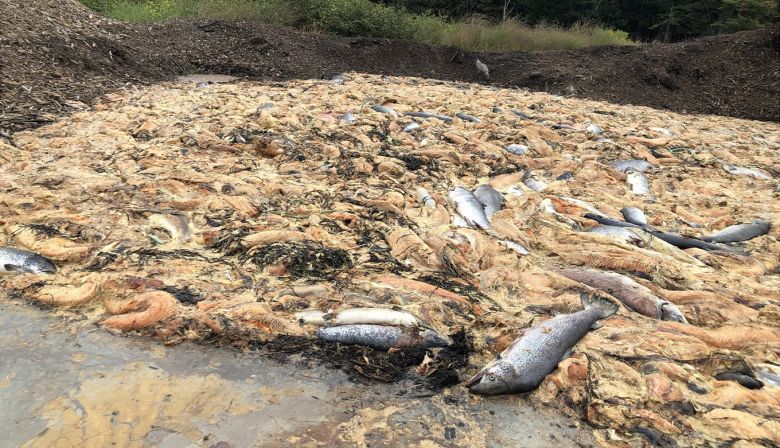 SOMESVILLE, Sept. 21, 2021 - Cooke Aquaculture discovered the massive die-off of salmon at its farm off Black Island as early as Aug. 16, newly obtained emails show, and was able to clean its pens and haul the carcasses to a compost in Tremont before alerting the DEP on Aug. 27, which was a Friday.

Staff from the environmental protection department did not visit the site until Tuesday Aug. 31, 15 days later.

In one email a DEP staffer hinted that Cooke representative Jennifer Robinson alerted the DEP because the word was getting out. “She reported she notified the DMR … and added that a reasonable number of locals know. She sort of expected we may be getting calls,” wrote Michael Loughlin, environmental specialist in the Bureau of Water Quality.

By the time the DEP was alerted it had to rely on self-reported data from the company because it could not collect any data on its own. Staff was resigned to being able to do little.

“A boat ride out to check DO (dissolved oxygen) in the mixing zone would be a waste of time,” wrote Loughlin, “I already asked Jennifer (Robinson) to send me the mixing zone readings.” Robinson was asked to provide water monitoring data from Aug. 14 to 17 during the height of the die-off.

Clarissa Trasko, DEP waste water compliance officer, expressed similar sentiment when she proposed visiting Black Island Aug. 26 or 27 “if for no other reason then to wave the DEP flag.”

The DEP’s visit on Aug. 27 went according to expectations with little ability for staff to gather relevant data. 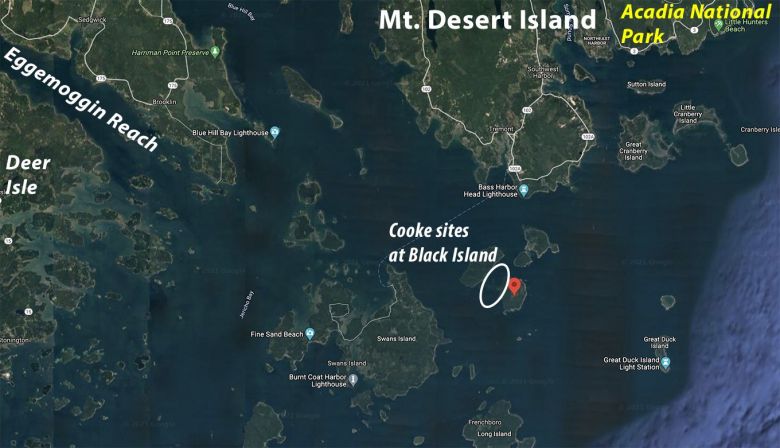 Location of open net-pen cage site where the die-off occurred
Loughlin reported, “One of the site managers indicated that the crew was off over the weekend of August 14th and 15th. When the site manager arrived on site on the16th he could see there were dead fish under the net pens at both sites. He confirmed that there was algae growth on the nets during the die off but did not explicitly confirm that was the cause of the fish deaths. He did indicate the nets had a lot of algae growth and were cleaned immediately after the die off.

“These fish are were adults that have been on these sites for at least 24 months. Cooke staff have no explanation for what caused the die-off of fish other than it was likely due to the low DO's. They have no definitive explanation for what caused the low DO's in the affected pens. They reportedly did not see anything out of the ordinary prior to this event and it caught them by surprise.

“There were no fish to collect as the last mortalities were shipped to a compost site (Gott’s) in Tremont on Friday, August 27th.”

Protect Maine’s Fishing Heritage Foundation (PMFHF), along with other members of Frenchman Bay United, a coalition opposing plans for a massive industrial salmon farm in Frenchman Bay near Acadia National Park, recently sent a letter to Department of Marine Resources (DMR) Commissioner Patrick Keliher with a list of questions that the groups believe need answers, given the severity and magnitude of the fish die-off.

The Black Island pens near Frenchboro are owned by Cooke Aquaculture, the largest holder of industrial-scale fish farming leases in the state, with more than 600 acres. Over the years, the company has been cited and paid millions of dollars in fines for numerous violations in Washington state, Maine, and New Brunswick.

PMFHF Executive Director Crystal Canney said: “Among some of the more serious questions are what caused this, how did state agencies respond (or not respond), and what are the impacts on waters around the pens? Maine people, especially local fishermen and those who live and work in this area deserve an answer.”

“At a time when foreign investors are trying to get approval to put one of the world’s largest in-water salmon farms in the pristine waters right next to Acadia National Park, this die-off raises many serious questions about the threats posed by these industrial-scale farms and the state’s ability to regulate and monitor them,” said Ted O’Meara, a Frenchman Bay United board member.

Canney added: “Lobstermen and women have testified at hearings that dead lobsters have been found near Cooke pens in Jonesport, and the company has been operating without an updated discharge permit. At every turn, industrial-scale aquaculture is given the benefit of the doubt, whereas lobstermen and fishermen have their feet held to the fire. We need evidence that Maine’s oversight agencies are putting the health of our waters first, and not turning a blind eye to industrial-scale aquaculture damaging our oceans. This is why the answers to our questions about this die-off are so important.”

The emails, obtained through Maine’s Freedom of Access Act, also show the confusion between the state’s dueling agencies, environmental protection and marine resources.

“Is there a protocol in place for one department to talk to another, in this case DMR to notify DEP, when salmon or other aquaculture die offs occur?” asked the group. “To summarize from media reports the communications director indicated it was not the responsibility of DMR to notify DEP.”