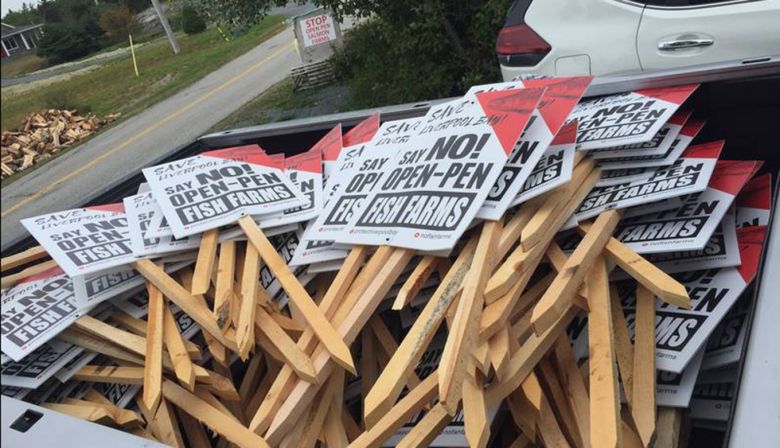 A trailer full of signs that the citizens’ group Protect Liverpool Bay produced to signal residents’ intention to fight a proposed Cooke Aquaculture expansion on Nova Scotia’s South Shore.
As the arguments go on over open-pen salmon farms — and especially over the wisdom of adding more of them — here’s a signal from the wider world we ought to note: these floating pig farms have worn out their welcome and are being pushed out of the fjords of Norway, the lochs of Scotland, the coast of Ireland and the inlets of B.C., or having their expansions blocked.

There’s a mad scramble on to create alternative, non-polluting technologies.

This is happening in the leading jurisdictions: Norway, the U.K. and B.C. Meanwhile, there are a couple of backwaters — Atlantic Canada and Chile — which are the favourites of salmon companies because politicians there are easy pickings, amenable to the standard (and highly profitable) poop-in-the-water technique.

This, arguably, is why the Japanese-Norwegian company Cermaq is bargaining for 20 sites in Nova Scotia — because the federal government has decreed that all open-pen operations in B.C. must be out of the water by 2025, crimping its operations there.

In Norway, the leading producer, the movement is not just driven by public pressure over pollution, or the fact that wild stocks have been reduced by half. Sea lice infestations are so bad that they’re affecting the size and quality of the fish — and actually stunting the industry’s growth worldwide over the last few years.

A recognition has dawned: one way or the other, open pen is not a sustainable way forward.

There are four alternatives in the mix.

One, of course, is land-based production. There are some 50 such operations in the world, including one (Sustainable Blue outside Windsor) in Nova Scotia. Another is going up in Florida that intends to supply half the U.S. market within 10 years. The drag on these is that they are energy intensive, mainly to regulate water temperatures, and thus are expensive to run, with the product requiring premium prices, although costs are dropping as the technology advances.

There are land-sea “hybrid” systems evolving in which the salmon are grown on land to their “post-smolt” stage (up to one to two kilograms), and are only “finished” in open pens for less than a year, giving lice and disease less time to catch on and reducing their environmental impact.

Cermaq, among others, is trying this in B.C., in the hope that reducing the pollution will allow net pens to pass environmental muster in this reduced role.

Another is open pen in the deep ocean, in which large cages are submerged below lice and disease depths. The most spectacular of these is a 100-by-68 metre $300-million polyhedron decked out with robotics and electronics being tested now by the SalMar corporation and intended to be submerged some 40 kilometres off the coast of Norway.

The most interesting, however, especially for our purposes — although perhaps not from an aesthetic point of view — is containment at sea. Tryouts are proliferating in Europe: from contained cages, either floating or submerged, to converted freighters, to one company having developed an egg-shaped container 75 metres high that will be three-quarters submerged.

In all these arrangements, water is pumped from below 12 metres where there are no lice, and the containment keeps out disease — therefore very few chemicals are necessary. Fish manure and food residue are filtered out and sold for fertilizer. Sounds civilized.

These alternatives were outlined in a recent federal report, State of Salmon Aquaculture Technologies, in tandem with the move against open pens in B.C., announced by Justin Trudeau in the last election campaign. It came after a devastating report by the country’s environment commissioner in 2018 accusing the federal fisheries department of ignoring its responsibilities to wild salmon and ocean pollution with regard to salmon farms.

The odd thing is that the federal move applies only to B.C. (which has several times the production of Atlantic Canada), although the report was done by a Halifax firm, Gardner Pinfold. The Atlantic Salmon Federation complained bitterly about Atlantic Canada being excluded, saying Ottawa “must govern federally.” (Federal jurisdiction is apparently more extensive in B.C., a result of more First Nations involvement and a convoluted constitutional court case of 10 years ago.)

For the Atlantic provinces, the message is clear: allow no new cages in the water without guarantees that they’ll be pollution-free, or at least vastly less polluting than at present, and give the old ones a deadline for the same. At the present breakneck rate of advance, even a couple of years will likely make the best of these technologies universal, something even the most backward jurisdictions will not be able to ignore, lest they end up even further behind.