Maine Compass: Enough of "pickerel vs. payroll" on Kennebec

Sep 2, 2021
We should work toward win-win solutions that restore sea-run fish to the Kennebec, maintain critical infrastructure, and improve the Kennebec River as a resource for our towns and communities. 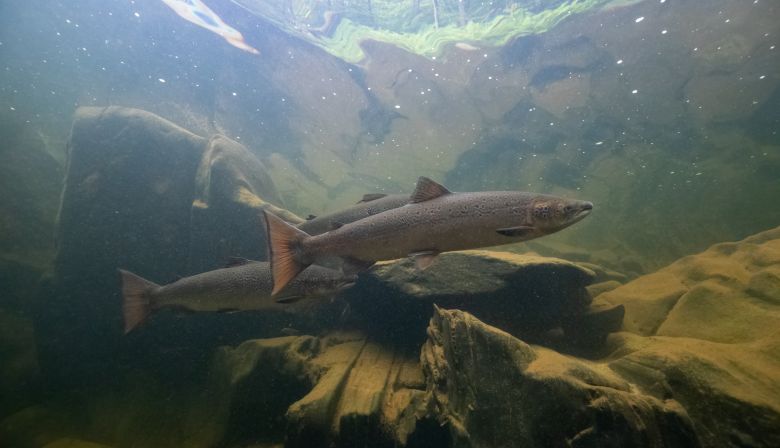 Atlantic salmon in the Sandy River, a tributary of the Kennebec River.
I was born in Lewiston, grew up in Auburn and had my first job in a shoe shop. Shoe making helped me afford Farmington State College. I spent 35 years teaching at Clinton Elementary School. Many of my student’s parents worked in mills along the Kennebec. I’m also a lifelong river rat, beginning in the days when my mother warned me away from the dirty and dangerous Androscoggin. I watched as Ed Muskie’s Clean Water Act turned the Kennebec from an open sewer to a community resource with waterfront parks and boat launches and fishing access. It was 1990 before it was clean enough to fish — a day I never thought would come.

In 1999 I celebrated the Edwards Dam removal. Sea-run fish once again swam upriver. I was one of the first to catch shad in Waterville. Now that I’m retired I shad fish below Lockwood Dam almost every day in May and June; it’s a world-class fishery in a river that was too dirty to fish for half my life.

Since 2001, I’ve helped more than 100 guests catch shad from the Kennebec — kids, veterans and others who wanted to see the recovered Kennebec after Edwards Dam came out. I’ve had an up-close-and-personal view of the failed fishway at the Lockwood Dam. On a good day in my boat a guest and I can catch 40 or 50 shad. The fish lift at Lockwood captured only 92 shad this year.

Every place in Maine we’ve removed a dam — on the Kennebec, the Sebasticook, the Penobscot, and the Presumpscot — sea-run fish have immediately moved upstream and re-established themselves.

We’ve done that without harming Maine mills and infrastructure on our rivers. Dam removal will bring change to the river, for fish and for people. Past dam removals led to a new water intake for the Statler mill in Augusta, a new water intake for the ND Paper mill in Old Town, a new combined sewer overflow outlet for the city of Augusta, and a new sewer discharge outfall for Old Town. Designing and constructing those upgrades was part of the restoration projects, required by local, state, and federal regulators, and paid for as part of the projects.

If the Shawmut Dam — and other dams on the lower Kennebec River that stand between sea-run fish and upstream habitat — are removed, that will happen again. People like me understand how important businesses like Sappi and Huhtamaki are to the local economy, and how important water and sewer infrastructure are to our towns. Dams will not be removed until impacts to important infrastructure are addressed. We’ll demand it.

It’s distressing to see so many town officials and legislators and potentially affected businesses replaying the “pickerel vs. payroll” debate I’ve heard all my life. I fully understand their concerns that dam removals might affect their essential infrastructure. I expect them to ask that any impacts get addressed and the costs covered. And I agree with them that we should be looking for win-win solutions that restore sea-run fish to the Kennebec, maintain critical infrastructure, and improve the Kennebec River as a resource for our towns and communities.

But I don’t agree that we can restore fish with fishways. I’ve been watching the Lockwood Dam fishway fail to restore fish since 2006. I have no confidence that fishways at the other three dams will be any more effective. Not on one dam, and especially not on four in a row. The win-win solution here is to build infrastructure improvements into dam removal plans. The Penobscot River Restoration Project was a good model. In Old Town, a new water intake constructed as part of the Great Works Dam Removal allowed ND Paper to reopen in 2019 and expand last April.

A soon as the Veazie and Great Works dams were out of the Penobscot River, people were catching shad in Old Town just above the mill. The American Canoe Association held its Whitewater Nationals in the rapids where the dam had been. That’s win-win.

We can do the same here on the Kennebec — and we must if we want to recover endangered salmon in Maine.

Willie Grenier is a retired middle school teacher who has lived in Waterville for more than 50 years.