Mar 4, 2020
“Would we tolerate the same mortality in other animals?” one veterinarian from the Norwegian Food Safety Authority asked at a recent conference on salmon lice. 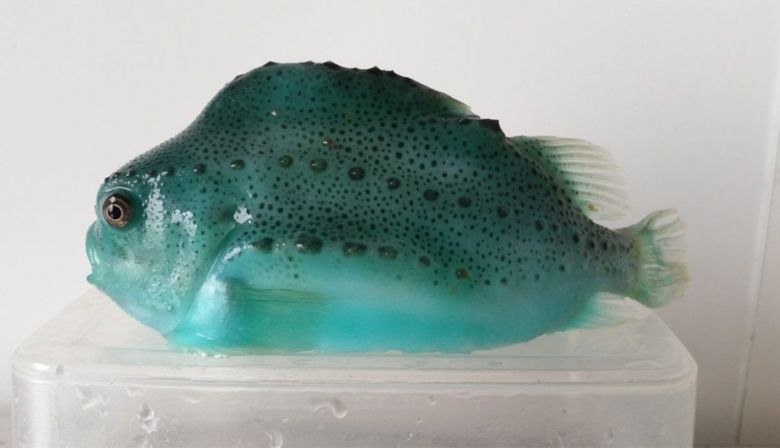 Recorded losses of cleaner fish from Norwegian fish farms run at about 40 per cent. A large proportion are also lost without being recorded first. The photo shows a commonly used cleaner fish called a lumpsucker (Cyclopterus lumpus). (Photographer: Reidun Marie Bjelland / Institute of Marine Research)
The use of cleaner fish by Norwegian salmon farming has increased in recent years. Lumpsuckers, ballan wrasse (Labrus bergylta) and other members of the wrasse family are used as a biological control for salmon lice.

These cleaner fish are used as a preventive measure to keep lice numbers down.

The fish snack on lice, which helps limit the numbers of lice that are able to attack farmed salmon in their cages.

"Wrasses are one of the most important measures we have to remove lice," said Espen Lie Dahl of the aquaculture company Salmar, which reuses some of their cleaner fish.

But these fish die in droves.

Counts show that four out of ten cleaner fish die during a single round of salmon production. The rest disappear without a trace, are eaten or slaughtered with the salmon, said Hulda Bysheim, a veterinarian from the Norwegian Food Safety Authority at a conference on salmon lice in mid-January.

Every day, 150,000 cleaner fish die while they work for their food and lodging in the Norwegian aquaculture industry.

“We are talking about 150,000 cleaner fish that die every single day of the year. It is an unparalleled animal tragedy,” Trygve Poppe, a professor at the Norwegian School of Veterinary Science, said to the national newspaper Dagens Næringsliv last year.

“Would we tolerate similar mortality in other areas of livestock production? The mortality rate for cleaner fish must decrease,” Bysheim said at the conference.

Lately, however, some cleaner fish are being reused by some fish farms.

Most mortality in southern Norway

Fish farms in southern Norway reported that nearly 60 per cent of the lumpsuckers they had put out in their cages had died, according to a survey by the Norwegian Food Safety Authority.

Of the operations from central Norway that responded, the recorded mortality rate for lumpsuckers was somewhat lower, close to 50 per cent. In northern Norway, the losses were 20 per cent.

Among wrasses, mortality rates were 44 per cent in southern Norway and 40 per cent in central Norway.

A great deal of bad weather and fewer cleaner fish managers in northern Norway may mean there was some under-reporting from this region.

“This is the first time that specific figures have been collected on losses,” says Lars Helge Stien at the Institute of Marine Research.

When a cleaner fish dies, it sinks to the bottom of the salmon cage and ends up in a collector that is hoisted up for counting, he explains.

“A lot of cleaner fish also get stuck in the netting and are eaten by cod and saithe outside the cage. In addition, cleaner fish quickly dissolve after they die, so these numbers are minimum figures,” Stien said.

Aquaculture companies are obliged to keep daily records of dead cleaner fish. From July 2018, they are also required to report these numbers to the Directorate of Fisheries.

Lack of measures to keep them from dying

Less than half of all cleaner fish that are set out in cages are recorded as dead. There are very few fish farming operations that record surviving cleaner fish after their production cycle has ended.

“That means we can’t account for more than half of all cleaner fish that are set out. It is simply untenable that we use animals like cleaner fish at such a large scale with so little knowledge about what happens to them,” says Susanna Lybæk, a zoologist and scientific adviser at the Norwegian Animal Protection Alliance.

“Maybe they have escaped, have been eaten by salmon or have died and disappeared,” she says.

Lybæk points out that one-quarter of the aquaculture facilities in the Norwegian Food Safety Authority's oversight survey deviated from the norm. In addition, two-thirds of cleaner fish farm facilities had deviations.

These deviations mainly relate to record-keeping, in that the facilities did not keep good enough records of when the fish had died.

“When many fish die without being recorded by the fish farm facility, it keeps the operation from introducing measures to prevent the same thing from happening again,” Lybæk says.

Salmon and cleaner fish have very different needs in terms of the environment in which they live. Nevertheless, they are expected to handle living in the same cage.

“We still don’t know what the cleaner fish need to thrive. There’s a lot of trial and error and groping around blindly,” she says.

"It's a recipe for disaster, and the cleaner fish are the losers."

Lumpsuckers are the most widely used cleaner fish and are farmed for use in the aquaculture industry. Last year, 30 million lumpsuckers were raised for this purpose.

Ballan wrasse are also farmed, while other wrasses are caught in their natural environment. Last year 23 million wrasses were caught and transported to salmon cages in the fight against salmon lice.

But the cleaner fish's natural need for enough food, enough oxygen and a protected area where they can hide and rest are not provided by all fish farms.

In the natural world, lumpsuckers can live for at least 7-8 years.

Less than 0.5 louse per salmon

The industry is required to carry out counts of lice numbers on salmon to avoid outbreaks and contamination to other facilities.

If there are more than one-half of a sexually mature louse per salmon, breeders must slaughter the salmon. Chemical, mechanical or thermal treatments are also used to delouse salmon to avoid outbreaks.

These are expensive methods, which cost the industry more than NOK 5 billion, or EUR 500 million last year, according to Dagens Næringsliv.

A focus on reducing the use of chemicals in the industry has meant a shift towards the use of cleaner fish to control lice.

“There is a great deal of good work being done by many companies,” the Food Safety Authority’s Bysheim said.

However, a high proportion of cleaner fish die due to poor living conditions.

“Does the industry treat cleaner fish as a consumer product?” she asked.

Cleaner fish such as lumpsuckers and wrasse usually live in shallow water and are used to hiding and resting among seaweed and kelp.

Lumpsuckers do not have a swim bladder and constantly use energy to swim around. For that reason, the fish needs surfaces to rest against.

Hides containing seaweed and kelp are necessary for cleaner fish to thrive in salmon cages.

"Many people do not offer shelter for cleaner fish, and they should be ashamed," said Lene-Catrin Ervik, who is lice coordinator at Åkerblå, and who also gave a talk at the recent lice conference.

Åkerblå works with fish health services for among others the fish farming industry.

Hunger one reason for mortality

There are many reasons why the mortality rate for cleaner fish is so high.

Two important reasons are the strong currents and low oxygen content in cages. Cleaner fish are also prone to injuries and illnesses.

In addition, high sea temperatures can bother cleaner fish. This is especially true in southern Norway.

Starvation in cleaner fish is also a problem in some places. Some fish farmers only occasionally feed cleaner fish, or only feed them a little over time to increase their appetite for lice.

But cleaner fish only eat lice as a snack, and need their own feed as well. This feed is different than what salmon eat.

Some fish farm operations feed less actively so that the cleaner fish are more eager to eat lice, while other operations note that hunger has no effect.

"Hunger results in higher mortality," said Kristine Vedal Størkersen from the Norwegian University of Science and Technology, who presented the results of a survey conducted among fish farmers over the entire Norwegian coast.

The researchers received 286 responses to a long questionnaire sent to farm operators or people who were responsible for cleaner fish.

"There was higher median mortality among cleaner fish in facilities that used skirts," or structures around the cages to limit salmon lice, Størkersen said.

This suggests that a lot of cleaner fish died from low oxygen saturation.

A skirt is a screen placed along the edge of the cage to prevent salmon lice from entering the cage with the water flow. Salmon lice swim in the upper metres of the ocean, just below the surface.

The disadvantage of these skirts is that they can reduce oxygen levels.

"The combination of the use of skirts and strong current is a risk factor," Størkersen said.

Previously, the common practice was to remove cleaner fish at the same time as salmon that were to be slaughtered.

Now some aquaculture companies are fishing wrasses and lumpfish out of cages for reuse.

"The regulations require that cleaner fish be sorted out for reuse or proper euthanization," said Espen Lie Dahl from the aquaculture company Salmar.

Reuse reduces the need for producing and capturing cleaner fish.

But it is time consuming to remove cleaner fish from salmon cages, especially wrasses, operators say.

"With five days of effort and good technique we were able to remove 70 - 80 per cent of our stock of lumpsuckers and wrasses,” he said.

The cleaner fish are then moved to other facilities immediately.

Reusing fish also has its costs

Sorting and intermediate storage can also cause cleaner fish to die early.

Cleaner fish that are fished out of cages are also stressed.

“We need more research as to how they well they tolerate being handled,” said Elisabeth Myklebust, from Cermaq Norway AS.

She doesn’t recommend reusing cleaner fish because it often causes sores on their fins.

"All well boats should be required to handle the fish gently," she said.

The cleaner fish that are not reused are killed.

Most respondents to the questionnaire said they stun cleaner fish before killing them.

The Norwegian aquaculture industry has now kept cleaner fish on a large scale for a decade, but professionals agree that their welfare situation remains poor.

"The situation is unacceptable," says Susanna Lybæk of the Animal Protection Alliance.

The group expects the results of the oversight campaign to have consequences for those who break the law.

But Lybæk believes the problem goes deeper than individual situations.

“Today's use of cleaner fish is unacceptable and is contrary to the Animal Welfare Act. This law says that animals can only be kept if they can be kept in a responsible manner that protects their welfare,” she says.

“The industry and the authorities must realize that cleaner fish are not suited for life in a salmon cage.”