Apr 8, 2020
Debes Christiansen adapted his salmon-testing lab to test for disease among humans 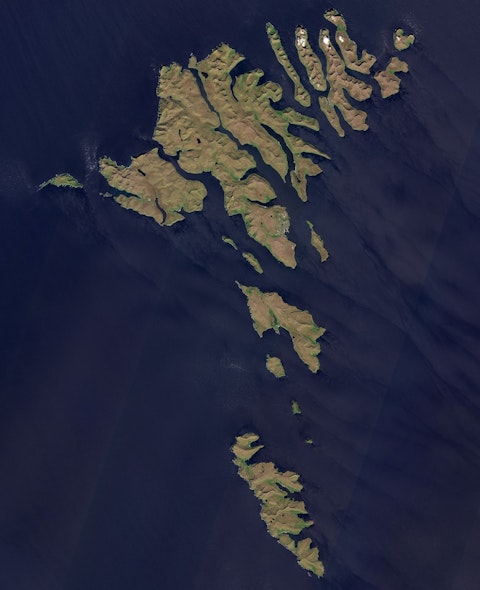 Faroe Islands seen from Space. Photo JPL/NASA
A scientist who adapted his veterinary lab to test for disease among humans rather than salmon is being celebrated for helping the Faroe Islands avoid coronavirus deaths, where a larger proportion of the population has been tested than anywhere in the world.

The North Atlantic Ocean archipelago currently has only one person in hospital with Covid-19 and it is one of four European countries, along with Georgia, Malta and Liechtenstein to so far not have any deaths from the virus.

On Wednesday, the country’s prime minister, Bárður á Steig Nielsen, announced that as of 20 April the country’s kindergartens, nurseries and early years classes in primary schools would reopen. Pupils in the last year of secondary school will also return to class and sport will recommence without spectators.

The success of the Faroese approach is said by local politicians to be largely a result of the foresight of the veterinary scientist Debes Christiansen, the head of department at the National Reference Laboratory for Fish and Animal Diseases in the capital, Tórshavn.

Christiansen had warned the government of the self-governing territory within the Kingdom of Denmark as early as January of the need to prepare for the possible spread of the disease from China.

His laboratory, which was primarily geared to test salmon for viral infection, was adapted and he purchased the extra ingredients required to test humans. There has been mass testing for virus among salmon farmed in Faroese waters since an outbreak of salmon anaemia virus in 2001 ravaged the species. Of the archipelago’s total export value, 90% is accounted for by fish and half of that is salmon.

According to official records, 10% of the population of 61,000 people have now been tested for the coronavirus. Faroese doctors have been able to track and quarantine everyone who has had contact with the 184 people who had tested positive for the virus. Of those who have fallen ill, 131 have fully recovered.

Christiansen told the Guardian that the switch to human testing had not involved “too much hocus pocus” and that his veterinarian laboratory had been able to source materials required for the tests from a wider range of suppliers than hospitals.

He said: “It is very easy to adapt. The only thing I changed were some of the ingredients. In our normal work it is specific to fish virus and fish bacteria and in this case I just changed the three components specific to the coronavirus.”

Christiansen said his facility could do up to 1,000 tests a day if required and the research assistants were available He said the latest batch of test samples on Tuesday had been negative.

He said: “It seems that there isn’t a high load of virus in the Faroese environment at the moment. Everyone is talking about those black figures [of patients now showing symptoms] but we have tested more than 10% of the population so I don’t think we have that have that many running around who are infected.”

Kristina Háfoss, an opposition MP who was the country’s finance minister until 2019, praised Christiansen’s swift action and that of the government in setting up a drive-in testing facility at the main hospital in the capital and a quarantine at an airport hotel.

She said: “If we had had to send the tests to Denmark for analysis it takes days and up to a week to get them back and it wouldn’t have been possible to control the disease the way we have done.

“Tracking and tracing has been a very important part. It has been possible to trace all the people who have been tested positive and who they have been with. And they have been put in quarantine for two weeks.”