Federal government approves use of fish-killing pesticide in Miramichi River Invasive species are the greatest reason for extinction of species, after habitat loss. Smallmouth bass in Miramichi system pose a major threat to species such as Atlantic salmon.
The federal government has given the green light to eradicating an invasive species of fish in Miramichi River by spraying the fish-killing pesticide rotenone starting this August.

A growing population of smallmouth bass in Miramichi Lake, Lake Brook and a portion of the Southwest Miramichi River has been threatening Atlantic salmon as well as brook trout native to the waters, salmon conservation groups say.

Smallmouth bass threaten salmon and trout by taking over their food and habitat, said Neville Crabbe, a spokesperson with the Atlantic Salmon Federation. They can also threaten other native species around them.

The product will kill the vast majority of fish in the waters being treated. According to an authorization document from Fisheries and Oceans Canada, the death and decomposition of fish "will modify the food web, the fish habitat ecological structure and the nutrient input" of the waters.

Salmon conservation groups and the North Shore Micmac District Council pushed for the rotenone project, which they'd hoped would go ahead last summer.

It was put on hold after Jeff Carr, the provincial environment minister at the time, asked for an environmental assessment. The Environmental Department approved the rotenone spraying on April 28.

"We've been fighting a losing battle since the moment we learned about it," said Daniel Houghton, who's part of a group of cottage owners at Miramichi Lake who have been opposing the project. "I have three children that are going to be in that water.

A team that has been put together by conservation groups, including the Atlantic Salmon Federation and the North Shore council, will be applying the pesticide with the help of 70 volunteers, Crabbe said.

"It's nothing that any of us want to do," he said. "None of us wake up and desire to take an action that will result in the death of animals and fish, we're conservationists."

The Miramichi watershed is "where thousands of New Brunswickers go and connect with nature," Crabbe said. "It's where people around the world come to see what our province and our people have to offer, and the presence of smallmouth bass would fundamentally change that." 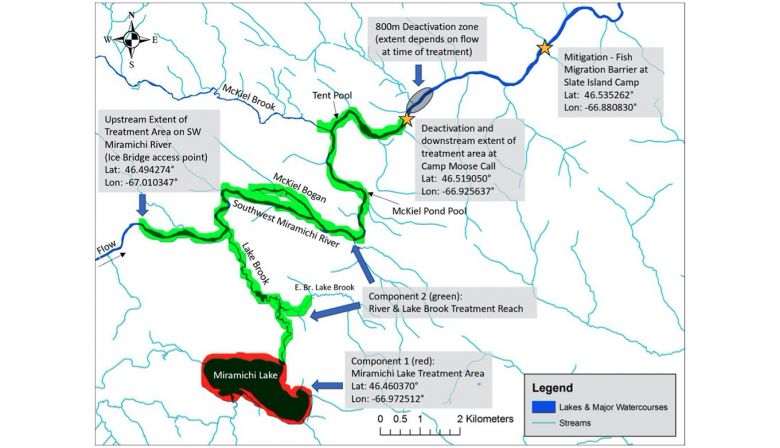 Map of area in which rotenone will be applied.
Spraying set for mid-August

Trish Foster, who owns a cottage on the east side of the lake, said she was told to avoid the lake for a few days but will still have access to her property.

"Realistically, none of us will be able to tolerate the reeking smell of tons of rotting fish, not to mention the vile odour of the poison itself," she wrote in an email to CBC News.

To mitigate the number of Atlantic salmon affected by the rotenone, salmon will be captured and held elsewhere prior to releasing the pesticide. Barriers will also be installed to prevent salmon from entering the area being sprayed, Crabbe said.

Those barriers will be removed once a water purifier has deactivated the pesticide, allowing salmon and trout to migrate back in, according to documents the North Shore council and conservation groups submitted to the Environment Department.

Crabbe said the rotenone will not be at concentrations lethal enough to destroy all fish in the water. Brown bullhead catfish and golden shriner, for example, are expected to survive.

The New Brunswick Aboriginal Peoples Council opposed the project throughout consultations, saying it doubts eradication efforts will be successful. The council represents off-reserve and non-status Indigenous people in the province.

In a report submitted to the environmental minister, Chief Barry LaBillois mentioned community members have reported catching smallmouth bass outside the areas being targeted for treatment. He believes rotenone will be more destructive than its advocates say and suggested it is a high price to pay to get rid of an invasive fish.

"In the Miramichi River, I believe this fish has already taken possession," he said. "Now you're going to kill every other type of fish, and I'm just talking fish. You're not talking about insects, vertebrates, frogs, and birds that are going to be impacted at the end of the day as well. You're going to kill all of this just for a few smallmouth bass that are already cemented there?"

A 2009 report by DFO also said the potential for complete eradication will be "lost" once smallmouth bass move into the Southwest Miramichi River. Smallmouth bass were spotted in the river in August 2019 after migrating from Miramichi Lake.

The DFO was unable to comment prior to publication of this story.

While LaBillois agreed smallmouth bass will devastate the ecosystem in the water, he said there are too many risks involved with the use of the pesticide. Solvent naphtha, which takes up just over 50 per cent of the product, has been shown to be toxic to aquatic life with long-lasting effects.

"What's going to be the long-term effect?" he said.

Lois Corbett, the executive director of the New Brunswick Conservation Council, told the CBC she didn't know enough about about the project to take a position on it.