Fight to free the Petitcodiac proves the power of grassroots democracy. 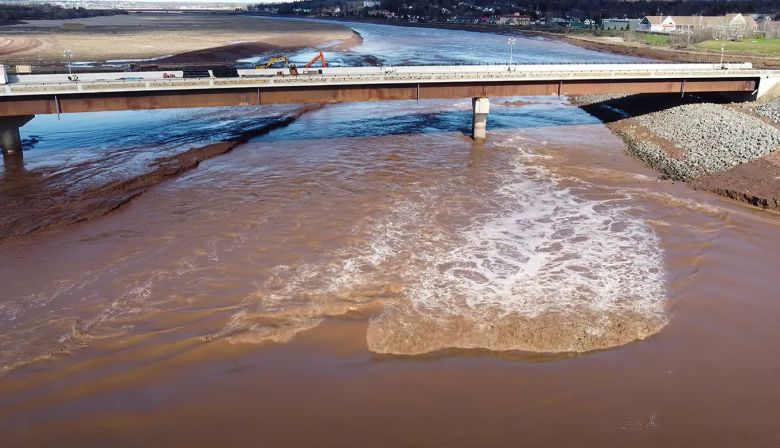 The Petitcodiac is now free-flowing under the new bridge span, with the former gates now buried and soon to be forgotten. Photo Christopher Bragdon
Sometimes it takes a while for a goal to be realized. This is the case for those waiting to see the Petitcodiac River flow freely for the first time in more than half a century.

As premier in the late 2000s, I had the privilege of leading a government that made a long overdue decision to begin the work to return the Petitcodiac Riv­er to its natural state.

A little historical perspective is probably in order here. When the causeway was first built in the mid-1960s, it really did seem like a good idea at the time for many of the people of Metro Moncton. More families were choosing to live in suburban areas, including the Albert County side of the Petitcodiac in what would be incorporated as the Town of Riverview in 1973. To get to work in Moncton, however, commuters were funnelled onto the Old Gunningsville Bridge. This bridge was a white­ knuckle passage so narrow that vehicles regularly lost their side mirrors because it was barely wide enough to accommodate two-way traffic.

The federal and provincial governments of the day came together to build the causeway and a much-improved route for vehicles and commuters. Many car mirrors were saved, but the negative impact on the Petitcodiac River watershed environment was almost immediate. The famous tidal bore - once one of the largest of its kind - was reduced to a ripple. The salmon, shad, gaspereau and other fish common to the river disappeared.

It wasn't long before alarm bells were sounded: the Petitcodiac - and New Brunswick - were getting the type of attention we could do without. The river was identified as one of the most endangered in all of North America, and phrases like "environmental disaster" were used to describe the ecosystem.

If anything, the plight of the Petitcodiac has shown us that grassroots movements and politics matter when it comes to making change for the better. The Riverkeeper Alliance was formed to fight to restore the Petitcodiac to its former glory. It was people like the Riverkeeper's Daniel LeBlanc who deserve all the credit for convincing people like myself as premier to make the investment needed to right a wrong.

Today, it's hard to find anyone who would say the work to restore the Petiticodiac was a bad decision. However, the decision was a little more complicated for our government back in the late 2000s. Opinion on the issue was more divided (even among Liberals).

The federal government of the day wasn't interested in partnering on the project, citing other priorities for infrastructure investments. If we wanted to proceed, we would have to go it alone.

It was those fighting to restore the river to its previous glory who ultimately convinced us the right thing to do was invest in changes to the causeway that would allow the Petitcodiac to flow freely again.

The causeway gates were first opened again in 2010, and the change was immediately noticeable. The wave pushed upriver by the world's highest tides quickly regained its size and strength. The wave became a bit of a bucket list destination for international surfers who were now able to ride it for a few hours. That drew inter­national media attention - both traditional and social - which painted the river and southeast New Brunswick in a positive light: a real boost for the tourism industry.

On the environmental front, there was also quickly some very good news. The fish came back immediately, and fish counts upriver showed impressive numbers of species not seen in decades. On that front, a major effort is underway to restore salmon in the river, with some encouraging results so far. New native plant life has also reappeared on the shores of the waterway.

With the federal government now at the table as a full partner in the restoration of the Petitcodiac, the final step in its restoration should be finished this year. The completion of a bridge over the river will allow it to flow completely free once again.

It has now been a decade and a half since we began the work to restore the Petitcodiac River. But the real credit here goes to those who have been fighting to save the river for much longer than that - in some cases through five decades of lobbying various governments to do the right thing. It shows us that perseverance and grassroots matter in the decision-making process.

I'm glad successive governments after ours stepped up to bring this project to the finish line. It was then, and is now, the right thing to do.

Former politicians, myself included, often reflect on past decisions - sometimes with regret and sometimes with pride. I'll always be able to say that the restoration of the Petitcodiac is something that falls into the latter category. I'm proud to have been part of this project and delighted for all those who have waited, in some cases for a half century, to see it to the finish line.