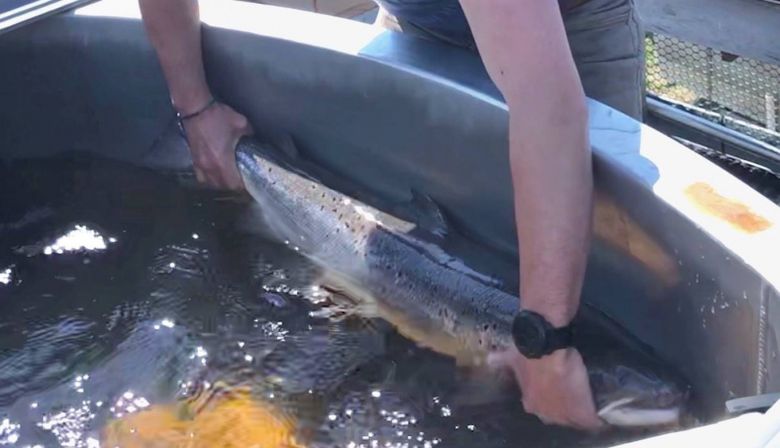 Jason Valliere, a marine resource scientist for the DMR, said each of his regular reports filed since July have included a disclaimer explaining that the official year-end estimate of returning fish was subject to change. Those counts are adjusted after data becomes available, taking into account individual fish that are captured, returned to the river to free-swim to spawning grounds, then re-captured by fisheries staffers at the Milford Dam.

Valliere explained that with more salmon returning this year, he had expected more fluctuation between the November estimate and the one he issued this week, after more data had been analyzed. The fact that more fish were in the river this year led to more fish being available to possibly be counted more than once.

The breakdown on this year’s run: 578 males, 666 females and 196 grilse, or salmon that had spent only one winter at sea before returning to the river, were counted. Of those, 64 males, 126 females and 31 grilse were taken to Craig Brook National Fish Hatchery in Orland to serve as broodstock in the ongoing restoration effort. A total of 1,215 salmon — 513 males, 536 females and 166 grilse were returned to the river to spawn naturally.

The summer weather created some challenges for the fisheries crew, Valliere said.

“The hot dry summer prevented us from handling fish a few weeks earlier in the summer than normal, which resulted in more fish being counted by video,” Valliere said. “In-season recaptures cannot be documented by video so they are prorated based on a subsample of known tagged fish in the river which are detected electronically. This is then extrapolated out to the rest of the video count.”

Earlier this year conservation groups and individuals were rebuffed when they asked the state to consider listing fish on the Maine endangered species list to strengthen the protections the federal listing has provided.