Mar 6, 2019
A court said the Fishing Act infringes on the Sámi's constitutional right to practice their culture, in which fishing plays a key role. 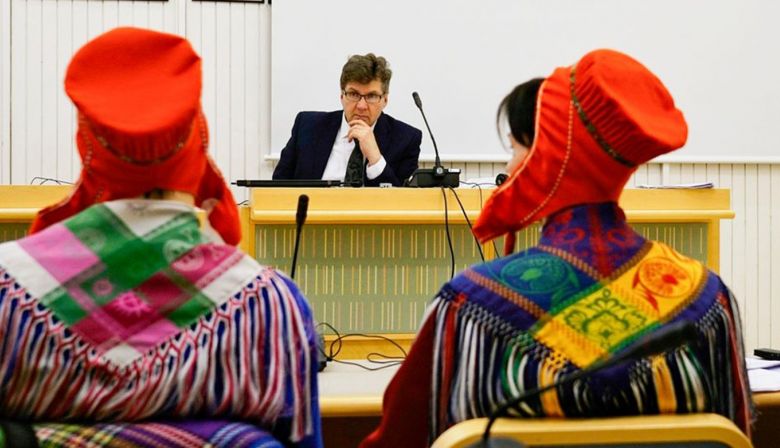 District Court Judge Esko Hohti at a hearing on Teno fishing held in Utsjoki on 14 February 2019. Image: Vesa Toppari / Yle
The District Court of Finnish Lapland has overturned all charges of illicit fishing against four Sámi men from Utsjoki, the country's northernmost municipality. According to the court, the Sámi were practising their constitutionally-protected culture, which includes fishing in Vetsijoki and Utsjoki, two tributaries of the River Teno.

Known as the Tana across the border in Norway, the 361-kilometre River Teno supports the world's biggest Atlantic salmon stock and is the most productive salmon river in both countries.

According to the court, restrictions added a few years ago to the Fishing Act also violate human rights treaties signed by Finland, which guarantee the Sámi people the right to practice their own traditional indigenous culture.

It also ruled that the salmon spawning targets in the Vetsijoki had been met, implying that their fishing was sustainable.

The district court ordered the state of Finland to pay for the men's legal expenses.

The court also dismissed also charges against a Sámi man who caught salmon using a net during closed season in August. The body said that a statute restricting traditional net fishing of salmon in the Utsjoki river in August violates the Sámi's right to practice their culture as specified in clause 17 of the constitution.

In the court's view, the level of salmon stocks in the Utsjoki does not justify the August fishing restrictions. It declared that the statute violates not only the Finnish constitution but also international agreements ensuring indigenous rights.

In 2017, a group of Sámi activists occupied an island in the Teno to protest fishing restrictions.

In recent years, the Sámi have also been involved with disputes over gold mining and logging in their traditional lands.

Finland is home to an estimated 9,000-10,000 Sámi people, most of them living in the northerly Lapland region.