Jun 17, 2020
Kuterra’s Atlantic salmon is raised on the Pacific coast near Alert Bay, and a kilometre away from the ocean 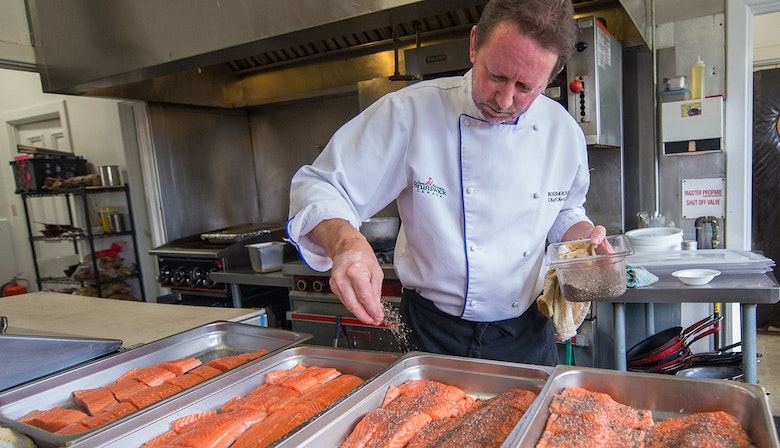 The farm is near — but not in — the Broughton Archipelago, a marine reserve between northern Vancouver Island and B.C.’s mainland. The fish easily passed the Ocean Wise audit, because the recirculating aquaculture system Kuterra uses is completely separate from the ocean. The water is treated and recycled into the system, so a very small amount of water is used up, said Shiori Ito, an Ocean Wise coordinator. Being able to treat the water so thoroughly also means there’s no need for antibiotic use, a practice that has been criticized with open-net farms.

Kuterra — a combination of the Kwakwala words for salmon and land — is owned by the ‘Namgis First Nation in Alert Bay. Their farm, a kilometre away from the ocean, was the first of its kind in North America when it opened in 2013. Other open-net fish farms in the area have been highly controversial for their interference on the health of wild salmon.

Seventeen fish farms owned by Mowi and Cermaq, located on wild salmon migration routes in the Archipelago were ordered closed between 2019 and 2023.

Ocean Wise Seafood is part conservation program, part consumer awareness brand aimed at helping fish-eaters make “ocean-friendly” choices. Ocean Wise has not taken a stand against farmed fish, but talk about the myriad farming techniques that can be used. Some are healthier than others.

The Ocean Wise symbol will appear on Kuterra products.