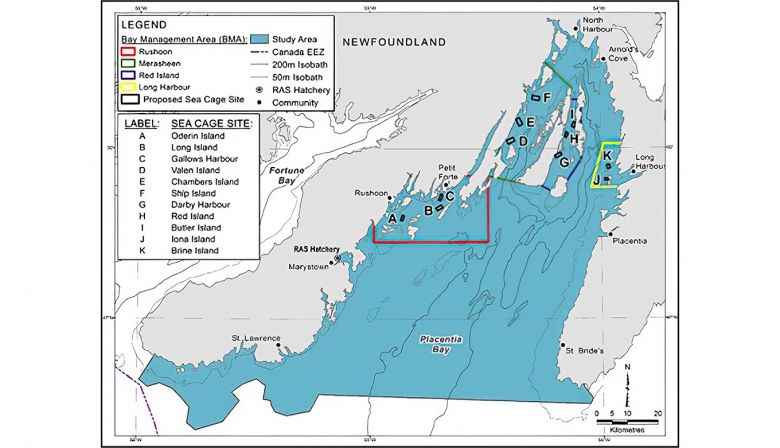 Map of salmon cage sites to be developed in Placentia Bay, on Newfoundland's south coast.
As baby salmon begin to emerge from eggs in a hatching tank at Marystown, Newfoundland and Labrador, the company that owns them is solidifying its presence in Placentia Bay.

Magdalena Maeland, compliance manager with Grieg Seafood Newfoundland, told SaltWire the moorings for the company’s first two sea sites — at Red Island and Butler Island — will be installed this fall and next spring.

Mooring for other sites near Merasheen and Rushoon, will be installed in the summer of 2021 and 2022, respectively.

“For our first year of production, only two sea cage sites will be operational. Fish are planned to be transferred out to the first sea cage site in June, 2021,” she said.

While work will begin soon to build the cages, the company’s land-based activity is already in high gear.

A 2,000 square meter building was finished earlier this year at the Marystown Marine Industrial Park.

The first eggs were placed in the hatchery in July.

Over the next several weeks, they will shed the yolk sac that nourishes them, and be ready for transfer to the nursery tank housed in the same building.

Once they reach smolt stage, they will be transferred to larger tanks.

To prepare for that, a smoltification building is taking shape on the site.

The 6,5000 square meter space will, when completed, house 10-meter diameter tanks, holding the salmon through the smolt stage.

“We’re estimating that building will be finished in the autumn. There’s no exact date for completion, but the frame of the building is being raised now,” said Power.

After the smolt stage, the young salmon will be ready for the last stage of the life cycle, moving from freshwater to the ocean.

That will require an even larger building at the site, a 10,500 square meter structure to house tanks that are 20 meters in diameter.

“Basically, they are equal in size to an Olympic standard swimming pool,” said Power.

This is the post-smolt building, explained Power. It’s where the salmon will be held, and acclimatized to a saltwater environment, before they are transferred to the sea cages.

Most of the construction work on the site is being handled by Grieg NL Development, the construction arm of Grieg Seafoods Newfoundland, explained Power, with subcontractors hired to handle some of the work as well.

The activity has contributed to a mini construction boom for the Burin Peninsula, in the year when a pandemic hindered a lot of construction work elsewhere.

COVID-19 did cause some delays to the construction schedule, said Power.

And the company is the subject of a Labour Relations Board complaint, alleging Greig NL terminated some employees who had signed cards to join the Carpenter’s Union.

The signed cards were, allegedly, sent to the company by the province’s Labour Relations Board last week. That violation of workers’ privacy is being investigated by the provincial government through the Office of the Privacy Commissioner.

The Carpenter’s Union says the layoffs of the workers took place within hours after the union cards were sent to Grieg NL. The union says once an application to form a union is filed, a statutory freeze then takes effect, meaning an employer isn’t supposed to lay off workers, hire workers or change pay rates.

The company told The Telegram late last week they could not comment on the union’s allegations since the matter was now in the hands of the Labour Relations Board.

That’s just the latest hiccup since the project was first registered in the spring of 2016.

The provincial government’s decision to approve the project later that year was the basis of a Supreme Court challenge by the Atlantic Salmon Federation.

The Supreme Court ruled the province’s environment minister did not follow the proper legal protocols of the Environment Act in granting approval to the project. Another environmental assessment had to be completed.

The project received final environmental approval from the province in 2018, allowing the company to proceed with its building plans and the aquaculture hatchery and nursery complex at Marystown began to take shape.

Andreas Kvame, CEO of Grieg Seafood ASA, said in a recent press release, “It is very exciting to build up a completely new region from scratch in Newfoundland. We will do it step-by-step and in line with best practice from similar conditions in our Norwegian regions.”

He added, “We are committed to farm with as low environmental impact and as high fish welfare as possible, as well as contributing to local jobs and value creation in the Marystown area.”

The next three years will be busy as the company continues to build the components needed for the operation.

Once the smoltification building is complete, construction will begin on the largest building for the land-based operation.

Construction of the 10,000 square-metre post-smolt building is scheduled to start later this year, for completion in early 2021.

At the same time, sea cages will be constructed, meaning a steady supply of work during the building phase.

Once the hatchery and sea sites are fully operational, it will mean more than 100 permanent jobs, Power added.

“The core operation will have in excess of 60 people, or more, over the next two years,” he said, and 60 or more people may be needed for operation of the marine sites.

By next summer, salmon from the first eggs should be swimming in one of the sea cages.

“We are ramping up our production over several years,” explained Maeland. “For our first year of production, only two sea cage sites will be operational. Fish are planned to be transferred out to the first sea cage sites in June of 2021.”

Maeland noted the sites will operate in rotation.

“Only two Bay Management Areas (BMAs) will be active at a time. One is receiving fish, one is harvesting fish, and the other is left empty for a year to fallow.”

The sea cage at Merasheen will be in use by 2022 and the cage at Rushoon should be holding salmon by 2023.