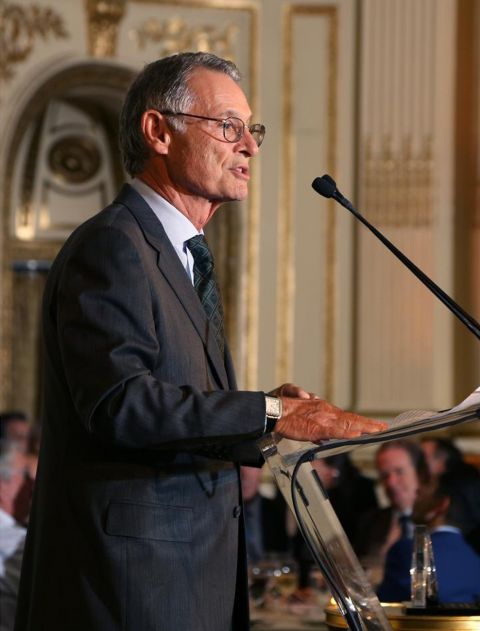 Edgar Cullman Jr. Photo Dawn Deppi
Coastal open-net pen Atlantic salmon aquaculture was once believed to be the magic bullet that would provide needed protein for the world’s growing population and help save the last remaining stocks of wild Atlantic salmon. Instead, it has turned out to be bullet with a poisoned tip. For decades now, the practice has ruined estuaries, adulterated the DNA of wild Atlantic salmon and introduced toxins into human food sources.

Thus far, market forces have kept open-net Atlantic salmon aquaculture a viable business, despite the harm. But a better future for our food sources and for wild Atlantic salmon may be on the horizon. That future—closed-containment Atlantic salmon pens, based on land—was the focus of the Atlantic Salmon Federation’s (ASF) annual New York City dinner, held last evening at the Plaza Hotel.

Among the 400-plus attendees of the dinner were the CEOs of three of the leading closed-containment, land-based aquaculture companies (Atlantic Sapphire, Sustainable Blue and Whole Oceans). Sustainable Blue donated Atlantic salmon hors d’oeuvres for the cocktail hour. Atlantic Sapphire provided the salmon filets that were served for dinner. (There was no discernible taste difference between the land-based, closed containment salmon and what you would get in any very good restaurant.) The movement for this type of healthier and more environmentally sustainable aquaculture is already well underway—Atlantic Sapphire is building the first phase of its land-based facility (which the company calls a “Bluehouse”) outside of Miami, where it says it will harvest around 10,000 tons of Atlantic salmon by the end of 2020, and Sustainable Blue’s Atlantic salmon, raised in Nova Scotia, is available online and through a retail partner. But the movement needs a push. That push began in earnest at last night’s dinner. (Full disclosure: I served as the emcee on the evening.)

The dinner’s honoree, Edgar Cullman, Jr., the former CEO of General Cigar, the current managing partner of the private equity firm, Culbro, and a lifelong advocate for Atlantic salmon, spoke of the urgency needed to remove coastal open-net Atlantic salmon aquaculture. The chef of Grand Banks, Kerry Heffernan—one of the true bright lights on the New York City food scene—spoke about his personal connection to this new type of salmon farming. “In the restaurant business, one of our greatest responsibilities is being a good steward of our products,” he said, quoting his former restaurant partner, Danny Meyer. “I’ve cut and tasted and cooked, and tasted again [these products], and I’ve seen enormous progress in this technology and now wholeheartedly recommend it to my fellow chefs both professional and household, who are looking for a product that shares their beliefs and satisfies their high standards on the plate.”

The founder of Patagonia, Yvon Chouinard, introduced a clip from his company’s latest film, Artifishal, which details the havoc wreaked by coastal open-net aquaculture (the film can now be viewed for free on YouTube.) Chouinard, the angler, surfer, rock-climber and noted conservationist, painted a rather dire picture of the current state of coastal aquaculture, but ended his talk on a note of hope, expressing his belief that there is a bright future for better aquaculture practices (Chouinard has put his money where his mouth is: He is an investor in Sustainable Blue).

The attendees of the dinner responded in kind, raising a record amount of money for an ASF dinner, during the silent and live auctions (the latter handled masterfully by the auctioneer, Nick Dawes) and the paddle-raise that ended the evening, and perhaps proved that a better future—for us and for wild Atlantic salmon—is already in the works.