Get an underwater view of 25,000 Atlantic salmon being dumped in the Piscataquis 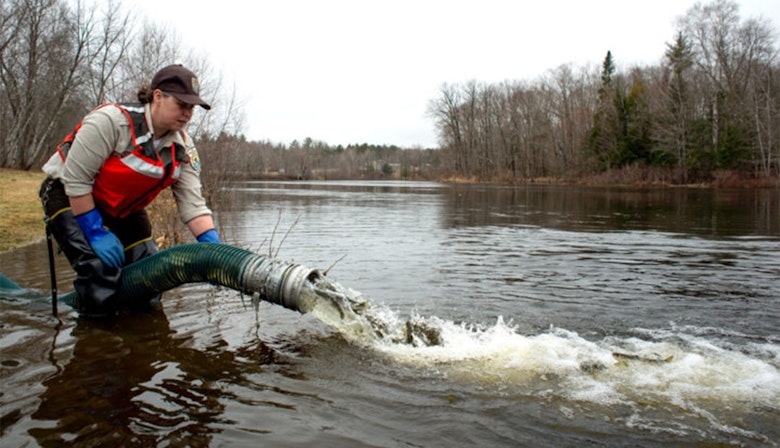 These fish weren’t brook trout, which are commonly stocked in the Piscataquis to serve local anglers who catch and eat them. They were endangered Atlantic salmon. And for the first time in six years, those salmon were being stocked far above Milford, on the main stem of the Penobscot River, to aid in federal and state restoration efforts.

In all, 25,000 Atlantic salmon smolts — 6- to 7-inch-long fish that are ready to swim to the sea — were stocked at the town boat landing. Those fish will spend two to three years in the ocean before the survivors try to make their way back to the Penobscot, then the Piscataquis, to spawn.

Oliver Cox, the manager at the U.S. Fish & Wildlife Service’s Green Lake National Fish Hatchery in Ellsworth, said stocking salmon that have advanced to the smolt stage, rather than the inch-long fry that are often stocked in restoration efforts, will give those fish a better chance at survival.

“In the hatchery, we can take the same number of eggs — say, 100,000 eggs — and keep them to smolts, and we may lose only a small percentage of them,” Cox said. “Where if we stock them as fry, which is a pretty traditional method for Maine, you may only have 10 percent that reach the smolt stage. Maybe less.”

Even smolts will have to battle for survival, though, and the success rate is low.

Of the 25,000 smolts that were stocked, only 10 to 50 adults are likely to return to the Piscataquis, according to the officials who gathered to celebrate the stocking. The challenges that face those fish — predation by any number of birds and fish, as well as humans — are numerous and take a huge toll.

Those that do make it back and are captured at the Milford Dam fishway on the Penobscot will be recognized because of a unique fin that was removed before stocking. Workers will release those “Piscataquis” fish above the dam, which will allow them to swim upstream to the section of river where they were stocked, and beyond, in their search for spawning habitat. Most fish captured at the dam are trucked to Orland, where they serve as broodstock at Craig Brook National Fish Hatchery.

If the fish had been raised in a natural setting, it may have taken three years for them to have reached smolt stage, Cox said. In the Green Lake hatchery, with a controlled environment, they become smolts in just a year.

Cox said that in most years, the smolts that have been stocked have been released into the Penobscot below Milford, because the top priority has been making sure that those fish make it to the open ocean alive, so they can return, be captured at the Milford Dam and serve as broodstock at the Craig Brook National Fish Hatchery.

Dan McCaw, fisheries program manager for the Penobscot Indian Nation, was among those celebrating the stocking Wednesday.

“It’s very exciting. This is the first time this has happened since the Penobscot River Restoration Project was enacted [leading to the removal of two downstream dams and a bypass around another dam],” McCaw said. “The tribe couldn’t be more excited to have salmon swimming upstream right now. And the attention that you folks will bring today will hopefully let the citizens of Maine know that we still have salmon, and they are awesome. They are magical, incredible creatures, and we have them right here.”

Sean Ledwin, director of Sea-Run Fisheries and habitat for the Maine Department of Marine Resources, said stocking smolts on the Piscataquis made perfect sense.

“This watershed has probably twice as much habitat as any of the other watersheds of the Penobscot,” Ledwin said. “It’s kind of a cool project that’s now possible because of the dam removals that have been done downstream. We’re excited to see these fish come back in a few years and see what they do. I think it’s cool for people up here to potentially encounter big, wild salmon that will return from Greenland all the way to the Piscataquis here.”