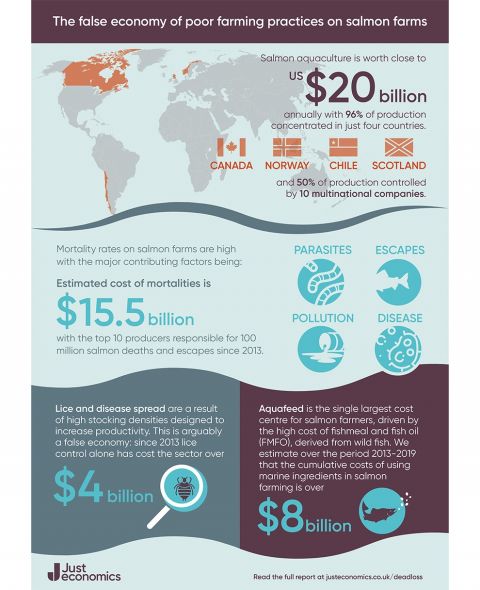 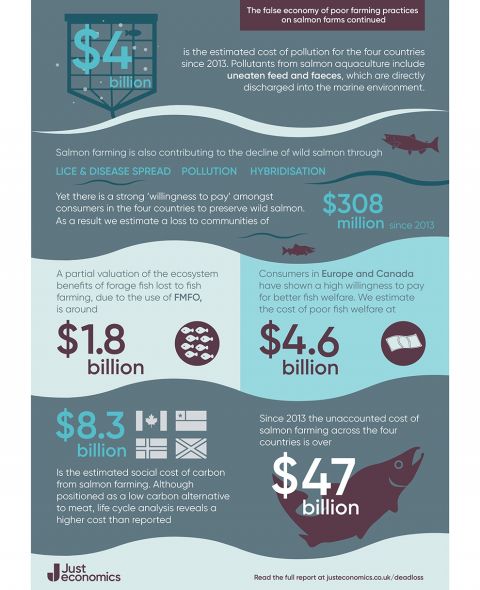 Salmon farming is wreaking ruin on marine ecosystems, through pollution, parasites and high fish mortality rates which are causing billions of pounds a year in damage, a new assessment of the global salmon farming industry has found.

Taken together, these costs amounted to about $50bn globally from 2013 to 2019, according to a report published on Thursday.

Fish mortality has more than quadrupled, from 3% in 2002 to about 13.5% in 2019, in Scottish salmon farms alone. About a fifth of these deaths are recorded as being due to sea lice infestations, but about two thirds are unaccounted for so the real mortality owing to sea lice – which feed on salmon skin and mucus, effectively eating the fish alive – could be much higher.

Scotland is one of the biggest producers of farmed salmon in the world, with the industry worth an estimated £2bn a year to the Scottish economy. But the costs in environmental terms alone were reckoned to be £1.4bn from 2013 to 2019, by Just Economics, which carried out the research for the report, entitled Dead Loss, for the Changing Markets Foundation campaigning organisation.

The sheer quantity of wild fish used in salmon farms is also a growing concern. About a fifth of the world’s annual wild fish catch, amounting to about 18m tonnes of wild fish a year, is used to make fishmeal and fish oil, of which about 70% goes to fish farms. This is causing problems for fishers in developing countries, who are seeing their stocks depleted in order to feed western consumption of farmed fish, according to the report.

Key species such as sardines in west Africa are now heavily overfished for this purpose, and this situation is likely to deteriorate further as fish farmers plan substantial expansion in the coming years. Scotland alone plans to double its farming capacity by 2030, while Norway expects a fivefold increase by 2050, according to the report.

Salmon farmers could use oils from algae as a source of Omega 3 for their farmed fish, to replace fish oil from wild fish, but few do so, according to the report. Natasha Hurley, campaigns manager at the Changing Markets Foundation, told the Guardian: “Moving away from using wild caught fish in food would make salmon farming more sustainable, as it is having a huge impact on wild fish.”

She said consumers were often unaware of what they were buying, as fish is poorly labelled in UK supermarkets and its farmed origin is often not obvious. She called on governments to tighten the rules on licensing fish farms, to enforce lower stocking density on farms, and to improve labelling.

The report also examined the salmon farming industry in Canada, Norway and Chile, the other biggest global producers. It found that of the costs associated with fish farming, about 60% were borne by the producers, especially in the form of fish mortality and the cost of treating sea lice, but about 40% of the costs were borne by wider society, for instance in pollution, loss of fish populations and the impacts on the climate crisis.

Mowi, a Norwegian company, produces a fifth of the world’s farmed Atlantic salmon, and is named in the report as showing 50m premature fish deaths from 2010 to 2019, at a cost of about $1.7bn. A spokesperson for the company said: “We are pleased that the report finds that, when considering the full range of benefits and impacts, the business of salmon farming demonstrates overall positive benefit. We agree that there are opportunities for continued improvements for our business. The inclusion of small amounts of fish meal and oil in our salmon’s diet is certified sustainable by third parties and integral to a salmon’s health and welfare.”

A spokesperson for the Scottish Salmon Producers Organisation said: “Farmed salmon has a great environmental story to tell – it has the lowest carbon footprint of any main livestock protein, it is a nutritious and healthy food and, as the UN and other international experts have acknowledged, aquaculture provides one of the best solutions to feeding the world’s burgeoning population in the years to come. It is a shame that the authors have chosen to ignore these undeniable benefits when publicising this report.”