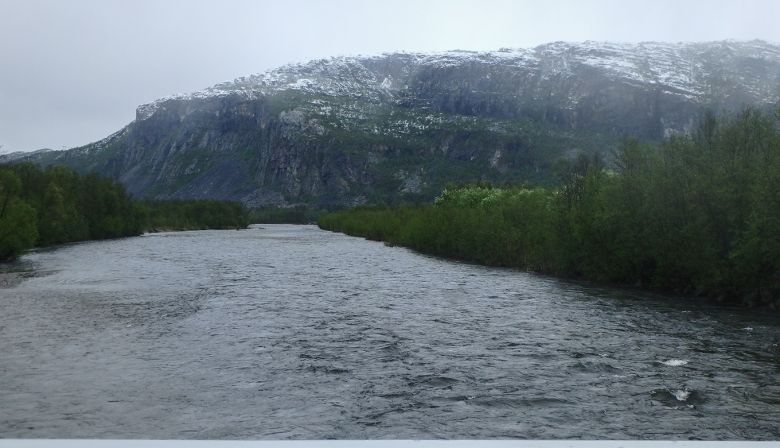 Alta River. Photo David Meerburg
Norwegian rivers, swelled by record snowmelt, have already yielded some huge wild salmon and trout, and this year, Norwegian sportsfishers have the rivers to themselves. Foreigners willing and able to pay enormous prices to fish in privately owned rivers still aren’t allowed to enter Norway because of Corona virus containment measures.

The season officially started at midnight on May 31st, and it’s reserved only for Norwegians at least until June 15, when the first tourists from Denmark will be allowed to enter Norway. Norway’s wild salmon has attracted rock stars and royalty over the years, but only the country’s own 83-year-old King Harald is likely to be among the latter if he’s up for some fishing this year. He’s been an avid sports fisherman for years.

The Tana River in Northern Norway has emerged as the one yielding the most saomon over the past decade, according to a new overview from state statistics bureau SSB (Statistics Norway). An average of 11,000 salmon have been hooked every year along the Tana, followed by the Namsen and Alta waterways with 8,000 and 7,000 respectively.

Two men from Trøndelag hooked a 15-kilo (33lb) fish in the Namsen on opening day, June 1st, and there were many other happy fishing enthusiasts as well. The season runs for three months and hotel operators along the rivers are hoping to offset the lack of foreign visitors with Norwegians, but many may not be inclined to pay the tens of thousands of kroner it costs for a week of fishing with guides, all meals and accommodation.

“The landowners along the rivers rely on salmon fishing tourism, and are just as hard-hit as others in the tourist industry,” Pål Mugaas of the national association of salmon river owners told NRK. “It’s difficult when a large portion of your market disappears.”