Great white sharks not the only threat gray seals bring 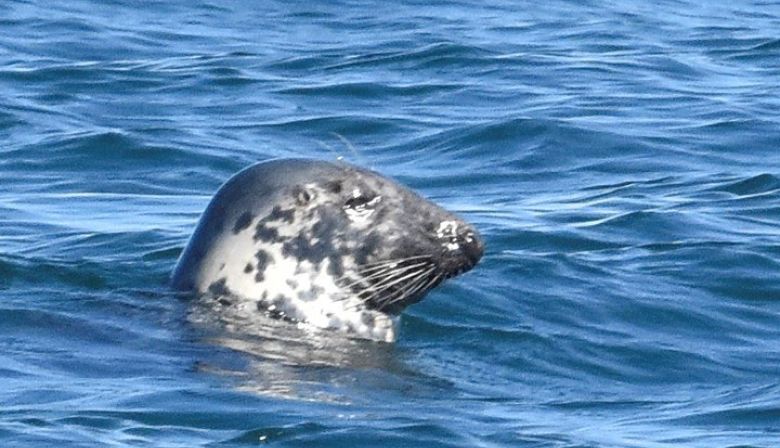 Gray Seal population has skyrocketed in past two decades. Photo Tom Moffatt
July is here and “Jaws” reruns herald the return of white sharks to our waters, attracted by our ever-growing gray seal population. Over the winter, gray seals have — thanks in large measure to the protection afforded by the Marine Mammal Protection Act — further augmented their numbers. The “gray seal buffet” is once again open for business.

But this season is, of course, unlike any in recent times. For the Cape and Islands, the coronavirus poses a far greater threat to the safety of its beachgoers and well-being of its economy than white sharks. But those threats are not necessarily unrelated. Here’s why.

The Marine Mammal Protection Act is distinctive in that it not only protects all marine mammals, it protects them in perpetuity, regardless of their numbers and impact on co-existing species, including humans. Let me hasten to acknowledge that the act was necessary and appropriate when it was passed almost 50 years ago and remains so in most respects. Because it protects marine mammals permanently, it in effect relies on nature to take its course in controlling marine mammal populations and finding an appropriate balance among competing and coexisting marine species.

But as the New York Times columnist Thomas Friedman likes to point out, Mother Nature has no conscience and consists solely of physics, chemistry and biology. So what’s the connection between the coronavirus and gray seals? Recent research has produced some findings we should not ignore that add to the case for amending the Marine Mammal Protection Act to address what happens when a marine mammal species recovers, potentially beyond its optimum sustainable level.

First, the coronavirus has confirmed in dramatic fashion that pathogens can be transmitted from animals to humans.

Third, with its dramatic population growth in recent years, those are increasingly the crowded conditions in which we find our gray seal population, particularly during breeding and molting in the winter and spring.

And finally, research in recent years has found that a significant percentage of seals on Muskeget have antibodies linked to an avian strain of influenza and a smaller, but still significant, percentage had an active form of the virus, likely owing to population density.

Five years ago, Bill Gates delivered a TED talk titled “We are not ready for the next epidemic.” We are now learning that lesson with tragic consequences. The regulators responsible for administering the Marine Mammal Protection Act are understandably preoccupied with saving the most threatened species, including in particular North Atlantic right whales. But that is no excuse for ignoring the demonstrable proliferation of species such as gray seals or condoning a law that compounds that proliferation by protecting the species in perpetuity, regardless of the threats to public health and safety posed by that ever-growing population.


The Marine Mammal Protection Act sets as its goal the achievement of an “optimum sustainable population” consistent with the primary objective of maintaining the health and stability of the marine ecosystem. Yet the regulators acknowledge they are unable to determine what an optimum sustainable population is. Furthermore, the act is inconsistent in setting a particular population level as its goal while permanently protecting the species regardless of their numbers.

With white sharks their only significant natural predator, gray seals continue to proliferate. Letting nature take its course means waiting for white sharks, disease or starvation to control the gray seal population. The uncontrolled growth of the seal population has threatened the recovery of our depleted fisheries, the safety of our inshore waters and the balance of our marine ecosystem. Now we face the added possibility that nature’s way of controlling the gray seal population will be a disease — possibly an epidemic — with whatever risks that may pose for the human species in this era of the coronavirus.

As the Marine Mammal Protection Act is currently written, the regulators have no incentive to determine what an optimum sustainable population of gray seals is — much less whether measures are needed to control their population — because the law protects marine mammals in perpetuity regardless of their population size. Now more than ever, it is time to amend the law to permit delisting recovered marine mammal species. Only then will the regulators be forced to fullfil their responsibility to assess whether gray seals have recovered and whether steps need to be taken to manage the burgeoning gray seal population.

Peter Howell, a former Nantucket resident, lives in Hingham and is the retired president of the Coalition to Amend the Marine Mammal Protection Act.