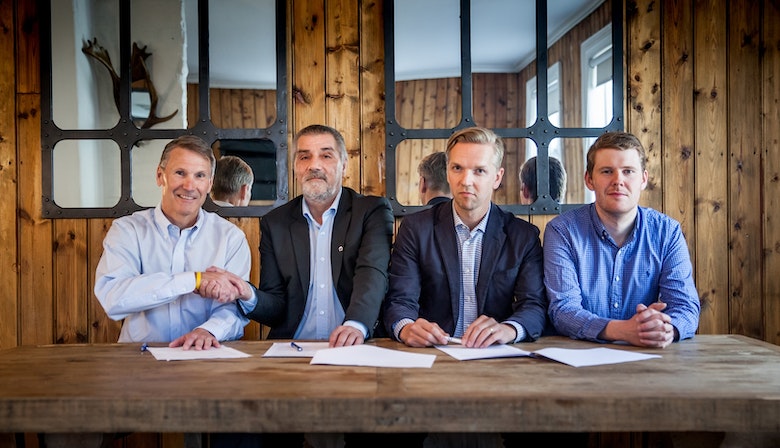 At signing in Reykjavik, Bill Taylor, President ASF, Henrik Sandgreen, Chair KNAPK, Fridleifur Gudmundsson, Chair NASF Iceland, Elvar Frifriksson, NASF Iceland. Photo Helmut Berg/ASF & NASF
A deal has been reached that will halt commercial salmon fishing in Greenland and the Faroe Islands for the next 12years to allow adult wild Atlantic salmon to return to rivers in Canada, the United States, and Europe.

The coastal waters of Greenland and the Faroe Islands are critical feeding grounds for the salmon, and many come from endangered populations in rivers like the Saint John in New Brunswick and the Penobscot in Maine.

"Significantly reducing the harvest of wild Atlantic salmon on their ocean feeding grounds is meaningful and decisive," said Bill Taylor, president of the Atlantic Salmon Federation.

In exchange for commercial fishermen not setting their nets, the Atlantic Salmon Federation and the North Atlantic Salmon Fund will financially support alternative economic development in Greenland, scientific research, and education projects focused on marine conservation.

The financial details are being kept confidential, but Atlantic Salmon Federation spokesman Neville Crabbe said no government money is involved.

He said all funding for the initiative will be raised through donors and fund raising by the two private groups.

Greenland fishermen will still be able to catch up to 20 metric tonnes each year for personal and family consumption.

Officials estimate the change will mean that more than 11,000 mature salmon that would otherwise be caught in commercial nets will begin returning to their home rivers in the spring of 2019.

"The best way to save North Atlantic salmon is to stop killing them. This deal does that in meaningf ul numbers, said Chad Pike, chairman of the North Atlantic Salmon Fund.

''The alarming decline of the arctic indicator species provides insight into challenges being faced by both ocean and freshwater inhabitants," he said.

The 12-year commercial fishing hiatus will provide relief for two entire generations of wild Atlantic salmon and officials say they expect the population benefits to be significant.

Declining wild salmon stocks have been a concern for years, with both overfishing and global warming being blamed.

The size of salmon runs across North America in 2016 were down 30 to 50 per cent from the year betore.

According to figures from the Department of Fisheries and Oceans, the salmon population in New Brunswick's famous Miramichi River has declined by 26 per cent over the last 12 years.

Last year, the federation said it was the first time ever that no wild Atlantic salmon returned to spawn in New Brunswick's Magaguadavic River.

Despite a stocking program going back to 2002, the Fisheries department said the population in the Magaguadavic had been dropping steadily since an estimate of 900 wild salmon in 1983.

Delegations from Greenland and the Faroe Islands will declare the zero commercial quotas at next month's international summit in Portland, Maine, but they are retroactive to April 30.