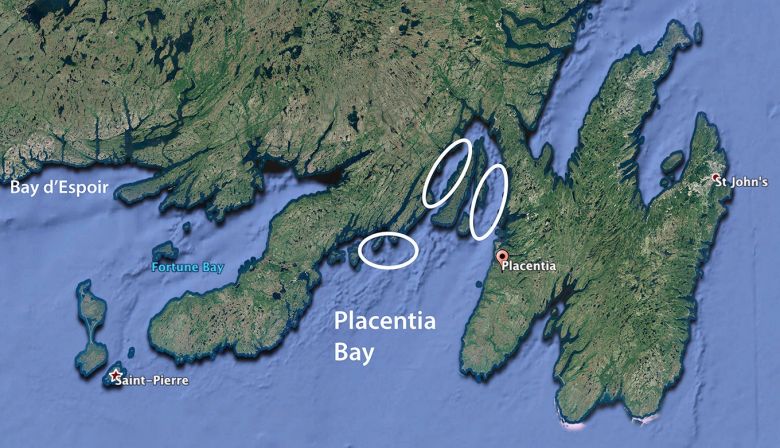 Proposed Grieg salmon farm site areas in Placentia Bay.
Norway's Grieg Seafood has finalized its acquisition of Grieg Newfoundland on the east coast of Canada, it announced in a stock exchange filing.

The sellers are led by a company controlled by Per Grieg Jr, also the main shareholder and chairman of Grieg Seafood. The final acquisition, setting Grieg back NOK 539 million ($51m), will be completed via an upfront payment of NOK 289m, combined with the issuance of new shares in the company to the sellers of Grieg Newfoundland covering the remaining NOK 250m sum, it said.

Although the subscription period for the private placement had expired thanks to a two-week extension to the deal, Grieg has announced it plans to issue a further 1.78m new shares to the sellers Grieg Aqua, Kvasshogdi, and Knut Skeidsvoll, it said. Each share is priced at just over NOK 140.

DNB Markets, Nordea Bank and Sparebank 1 Markets have been retained to act as financial advisors on the private placement, Grieg confirmed.

When the deal was first announced in early February, Grieg said the Newfoundland and Labrador project included exclusivity for salmon farming in Placentia Bay, "which has a farmable area bigger than the Faroe Islands".

The project currently comprises licenses for 11 sea sites. Three licenses are approved, three are expected to be approved in 2020 and the rest are in different stages of application. It also includes a "high-end" recirculating aquaculture system facility under construction.

The project has a long-term annual harvest potential of 30,000-45,000 metric tons of Atlantic salmon; this represents a significant step in Grieg's target to reach harvests of at least 150,000t per year by 2025.

This growth is to be achieved through post-smolt investments, M&A activity and organic growth, it said, while value chain repositioning will be achieved through an increased presence in the market with partnerships, category development and brand cultivation.

"The acquisition of Grieg Newfoundland strongly underpins the 2025 strategy. The first harvest will be in 2022/23, and the region is expected to contribute 15,000t annual harvest by 2025," Grieg announced two months ago.

The Canadian project was a joint venture between Ocean Choice International (OCI) and Grieg Newfoundland Salmon. Grieg has signed an agreement for 99% of the shares, acquired from Grieg Kapital (39%), Kvasshogdi (39%), OCI (19.5%) and Knut Skeidsvoll (2.5%). It has the option to acquire the final 1%, still held by OCI.

The second phase has an annual harvest volume target of up to 33,000t. The long-term harvest potential in Placentia Bay of 45,000t will depend upon prudent risk management, approvals according to environmental plans, and sustainable and profitable production, it said. On harvesting and processing, Grieg will still collaborate with local partner OCI.