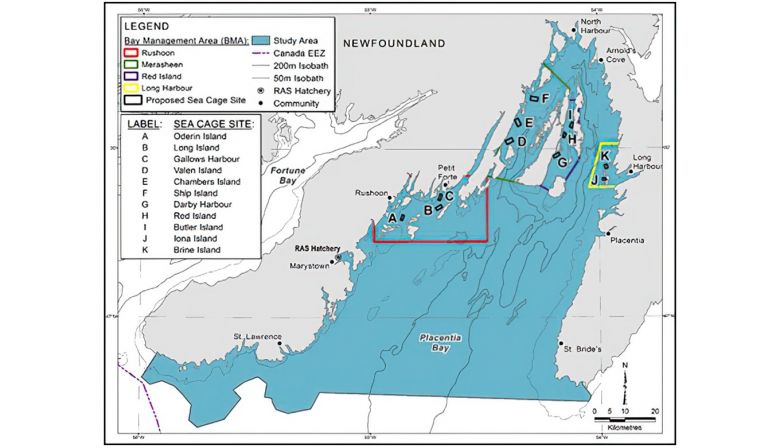 Grieg Seafood still plans massive expansion in Placentia Bay, NL
Grieg Seafood ASA of Norway is pulling out of Scotland and will aim to increase production in Canada and Norway to 130,000 tonnes of salmon annually by 2025.

That’s the main message in the company’s third-quarter report released this week.

Company CEO Andreas Kvame said, “We are ceasing operations of the five farms we have on Skye after this production cycle, as the area is too distant from Shetland to run as one production region.”

Earlier this year, the company had substantial losses in its sea cages in the Shetland Islands region. The company said jellyfish killed the salmon.

However, COVID-19 was the major challenge for the company this year.

During the second quarter of 2020, as the pandemic shut down the restaurant trade around the world, the company revised its annual harvest target to 90,000 and implemented some cost-saving measures.

In October, Grieg announced it would be postponing construction of one of the post-smolt buildings at the land-based hatchery in Marystown.

“Apart from that, the Newfoundland project is according to schedule, with healthy fish growing in our new hatchery,” said Kvame in Tuesday’s Q3 report.

The company said it has a goal to harvest 15,000 tonnes annually by 2025 from its sites in Placentia Bay, with the first harvest in 2022.

The American market is the target for the Placentia Bay salmon, Grieg said in its report.

The company noted the U.S. market is the world’s largest and fastest-growing market for Atlantic salmon, but only a third of U.S. demand is currently met by North American production.

“We already have a position in this market through our operations in British Columbia, where we have attained significant sales and marketing experience. With proximity to important markets on the U.S. east coast, the Newfoundland region significantly strengthens our U.S. market exposure.”

At its 11 sites in British Columbia, Grieg will harvest 22,000 tonnes by the end of this fiscal year.

In Europe, the CEO said the company’s operations at Rogaland and Finnmark in Norway and Finland delivered good results for the third quarter and “biology remains stable into the fourth quarter.”

COVID-19 continues to disrupt the salmon market, however, and Grieg is still feeling the impact on its bottom line.

Kvame said the initial shutdowns from COVD caused a drop in demand from the hotel, restaurant and catering (HoReCa) markets, and with the second wave of COVID restrictions were enforced in some European countries the HoReCa markets saw another drop.

“Salmon prices have suffered, particularly in the USA, which has a higher HoReCa market share compared to Europe,” the company reports.

Yet changes to consumer behaviour, prompted by COVID, may create opportunities for Grieg.

“With an increasing share of people preparing food at home, combined with a growing preference for healthy food and the current low prices, the demand for salmon may increase in the retail segment going forward.”

And that is prompting the company to make a change in how it markets and sells salmon, by establishing a fully-integrated sale and marketing organization within the company structure.

Up until now, the fish produced by Grieg was sold to consumers and other processors through another company, Ocean Quality, a 60/40 partnership of Grieg Seafood and Bremmes Fryseri.

Grieg has decided to take full control of Ocean Quality by buying the shares held by Bremmes Fryse. That transaction will be completed by June, 2021, according to Grieg.

“We do expect a strong market after Covid-19 is under control, and we continue our journey of sustainable growth, albeit at a slower pace than we planned before the pandemic,” said Kvame. “Medium to long-term, our focus will be in the areas with the best potential for sustainable growth during the post-Covid-19 recovery period, which is our Norwegian and Canadian regions.”

The CEO said it will sell its Scottish operations when the timing is right.

“In the short-term, our main priorities will be to improve operational performance and profitability, improve fish health, welfare and survival, execute the development of our Newfoundland operations and secure financial capacity by postponing non-essential investments,” said Kvame.

While the company’s value has been weak in 2020, Kvame said, “Let there be no doubt; we are committed to achieving our goals and we are dedicated to doing what it takes to improve operations, reach our sustainability targets of lower impact and better fish welfare, grow the company and create value for all our stakeholders—shareholders, local communities, customers and employees alike.”