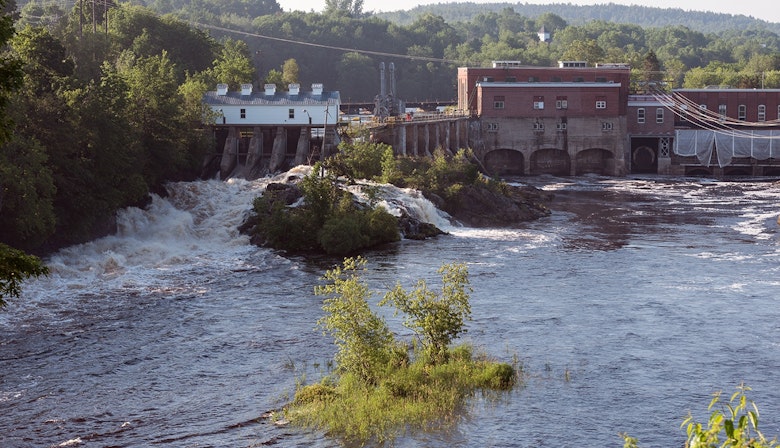 The Milltown Dam owned by NB Power needs to be removed to improve fish passage. Tom Moffatt/ASF
Indigenous Nation and NGOs representing thousands of people in Maine and New Brunswick are united in support of NB Power’s decision to remove the Milltown Dam, the oldest hydroelectric facility in Canada, and restore free flow to the lower Skutik (St. Croix) River.

The dam removal is part of a comprehensive, collaborative river restoration effort which includes habitat enhancement and planning for improved fish passage at other dams and barriers throughout the watershed. Ensuring native searun fish (fish that swim between the ocean and rivers and lakes) have access to their native habitat is a cornerstone of successful restoration.

Chief Hugh Akagi of the Peskotomuhkati Nation at Schoodic reflected on the importance of the Skutik river to the ecosystem and people in Peskotomuhkati Territory, saying, “The Skutik River has been at the heart of Peskotomuhkati territory and cultural and spiritual life for at least 13,000 years. Salmon, gaspereau, herring, porpoise, and many groundfish species such as pollock and cod that frequented the Skutik River and its estuary are central to Peskotomukati life and traditional diet.”

“The work to restore the Skutik (St. Croix River), including the Milltown Dam Removal and many other habitat improvement efforts, will bring significant benefits for the whole region. From the top of the international watershed, to the mouth of the river at Passamaquoddy Bay, well out into the Bay of Fundy and Gulf of Maine,” says Allen Curry of the Candian Rivers Institute and the University of New Brunswick.

It is only relatively recently — since the introduction of industrial practices like logging, dam construction, and pulp and paper production — that the river and coastal waters have been degraded by pollution, invasive species, and loss of access to habitat for native wildlife. Alewives are beginning to move into the St. Croix River in their annual migration. John Burrows/ASF
The river and its fish have a rich heritage among New Brunswick’s non-indigenous communities, as well. In his 1851 book, Report on the Sea and River Fisheries of New Brunswick, St. Stephen lawyer, naturalist and author Moses Perley wrote that in the 1820s fish such as gaspereau and shad “came in such quantities, that it was supposed they never could be destroyed.” By the 1850s, however, by-products from industrial practices like logging, dam construction, and pulp and paper production caused such a threat to the river that Perley lamented, “it will be highly discreditable to allow the extinction of the fisheries of this river, now threatened with total annihilation.”

The Peskotomuhkati Nation-led efforts to restore the Skutik, however, has seen remarkable recent success. One of the first beneficiaries is the gaspereau, which now appears on track to restore closer to its historic levels. In the summer of 2019, more than 480,000 gaspereau — recognized by the international St. Croix Watershed Board as “one of the river’s major environmental health indicators” — returned to the Skutik, double the return from the previous summer and well beyond the modern low of 900 fish that made the run in 2002.

“With our coastal communities so dependent on healthy marine waters to support vibrant fisheries and tourism reliant on whales, seabirds and other animals, it is important that we take care of species at the bottom of the food chain, such as gaspereau, to ensure thriving coastal communities along the shores of the Bay of Fundy and Gulf of Maine,” says Matt Abbott, Fundy Baykeeper with the Conservation Council of New Brunswick.

Gaspereau are considered a keystone species because of the critical role they play in both freshwater and marine ecosystems. Travelling in large schools, gaspereau serve as feedstock for groundfish, such as pollock and cod, many open ocean fish species, birds, and marine mammals, including porpoise, seals, and whales. Schools of gaspereau act as cover from predators for migrating juvenile salmon smolts. The fish is a direct source of food for people and an important bait species for the lobster fishery.

“In Maine, the Atlantic Salmon Federation (ASF) has shown how dam removals lead to the return of millions and millions of sea-run fish like river herring, shad, eels, and wild Atlantic salmon. Our work has garnered broad public support and we believe removing the Milltown Dam can provide community benefits and stimulate the recovery of an important international waterway,” says John Burrows, Executive Director of ASF’s U.S. Programs.

“We are facing dual crises of biodiversity loss and climate change and now, more than ever, we have to commit to actions that restore our threatened freshwater systems. We are encouraged by NB Power’s bold choice to decommission the Milltown Dam and bend the curve on environmental flow of the St. Croix River and critical species recovery,” says Elizabeth Hendriks, Vice-President of Freshwater Conservation with WWF-Canada.

For more information or to arrange an interview, contact: