Aug 6, 2020
The king of fish, the sleek and silvery wild Atlantic salmon, is under threat from a mystery skin condition which has baffled scientists. 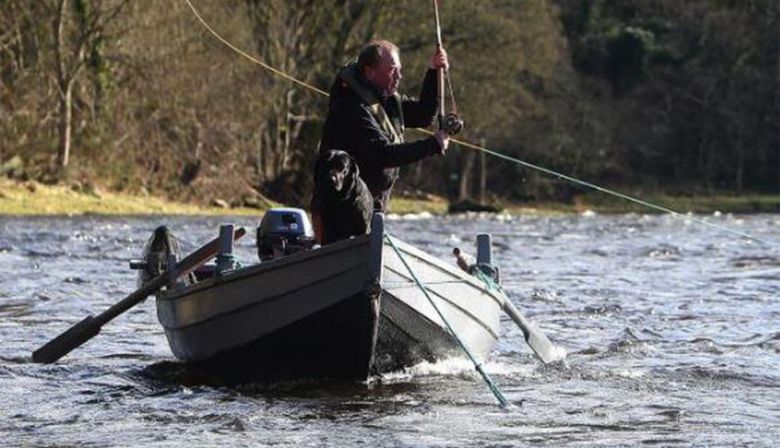 Atlantic salmon is both an important part of Scottish heritage, and an economic driver in the Highlands.
Salmon displaying signs of an unusual red skin disease have been found in Scottish rivers, sparking fears over how it might impact on wild stocks affected by years of significant decline.

A call has now gone out to Scottish anglers to help identify cases of the condition and to pass on details of affected fish to authorities in the hope that a cause can be found.

The disease shows up as rash, with bleeding and ulceration on the underbelly and near the mouth of affected fish. It leads to a fungal infection, which eventually causes fish to die.

Small numbers of wild Atlantic salmon with the symptoms were first spotted in Norway, Ireland and Scotland last year. Similar problems have been identified in a sub-species of wild Atlantic Salmon found in Baltic waters.

Such was the concern over the new disease then, that it sparked an international workshop in Norway last autumn, when laboratories in different countries agreed to join forces in an effort to trace outbreaks and to analyse samples.

However, despite extensive investigations, the cause of the disease, which appears to begin while fish are still at sea, was not established. The latest river discoveries would appear to have dispelled any hopes that last year’s incidences of the disease were a one off.

Professor Ken Whelan of the Atlantic Salmon Trust said: “It is very concerning when we don’t know what is happening.

“Last year it was reported in certain rivers in reasonable numbers; for example, the Helmsdale (in Sutherland) had quite a lot of reports. However, in other rivers it was not reported at all.

“We know it’s a skin disease and we know some fish can recover from it.

“A lot of information from different countries was shared in Norway last autumn. I was surprised at the amount of effort that has gone into it given it’s a relatively new phenomenon, but there was no smoking gun and no-one came up with a positive reason for it.”

He added: “In terms of the numbers of fish at sea, it’s not a good time to have any extra problems. The surplus of fish is not there to absorb any extra issues.”

The Atlantic Salmon Trust and government body Marine Scotland have called for anglers to share details of fish found to be affected, and advised them to avoid removing any showing symptoms from the water.

Anglers are instead being asked to record the exact location of the fish using smartphone GPS, to photograph the fish and record estimated size, weight and water temperature.

They are also being advised to disinfect fishing tackle, landing net, waders and fishing jacket if they have come into contact with the fish.

While wild salmon can show signs of redness on their underbelly due to injuries sustained as they follow their migration journey, red skin disease appears as an intense blotchy rash.

Salmon with the condition can appear lethargic, making them particularly easy for anglers to net. They go on to develop skin lesions and ulcers which extend along the belly to the head and tail. Secondary fungal affection then develops, resulting in the often rapid death of the fish.

According to Marine Scotland, reports of wild adult Atlantic salmon displaying signs of red skin disease emerged in May, but Covid-19 restrictions have affected sampling.

Last year the agency received 23 reports of fish displaying signs of the condition in rivers across Scotland, including in Sutherland, Easter Ross, Ayrshire, the Borders, in rivers including the Clyde, the Carron, the Tweed and the Spey.

Cases of red skin disease have also been found in recent weeks in wild Atlantic salmon in the west of Ireland, including the Corrib system in Galway and the River Lennon in Co Donegal. Anglers and fishery owners there have also been urged to record fish found to be displaying the symptoms.

The disease raises concerns over its potential impact on wild Atlantic salmon stocks which have been dwindling at an alarming rate due to overfishing and the impact of sea lice and escaped fish from fish farms.

Such is concern for wild Atlantic salmon numbers, that at a meeting in January at the Scottish parliament, the Government’s lead scientist, John Armstrong, warned that unless action is taken to halt the decline, the fish could be extinct within 20 or 30 years.

Prof. Whelan added: “If red skin disease is caused by an external agent, we might be able to do something about it.

“But it seems to be manifesting itself in the ocean and that makes it even more difficult.

“If it’s a natural phenomenon, it will mean modelling it and seeing what we think the impacts of it might be.

“That could eventually lead to new salmon conservation rules.”

Reports of the red skin disease come as many of Scotland’s salmon fishing rivers are reporting bumper catches, with speculation on angling forums that lockdown may be behind a boost in salmon stocks.

The Tay District Salmon Fisheries Board tweeted: “On the River Tay, more salmon have already been caught this July than all of last July. We will likely well surpass the five-year average too.

“While there is an effect of delayed fishing due to lockdown, seems clear there really are more fish about.”