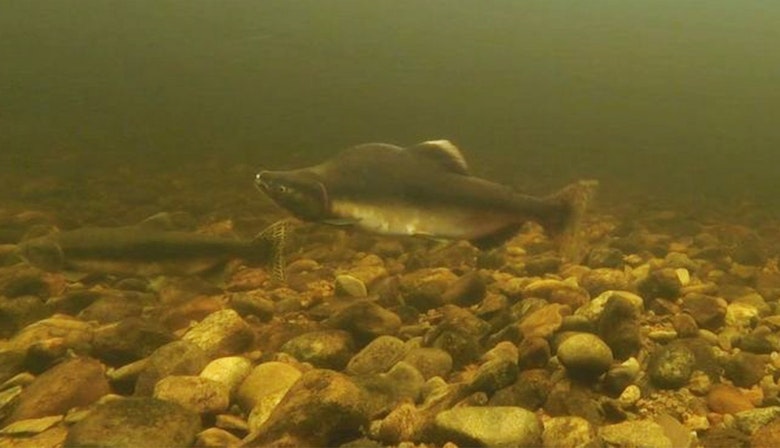 Male and female pink salmon in 2017 invasion of a Scottish river. Ness Fishery Board
Anglers have reported finding a non-native species of fish back in rivers in parts of Scotland.

Pink salmon are native to Pacific Ocean waters but have spread to parts of northern Europe after being released into rivers in Russia in the 1960s.

"Unprecedented numbers" of the fish were found in Scottish rivers in 2017.

Their two-year life cycle raises the likelihood of the salmon being seen again and catches have been reported on the Dee, Tweed and Kyle of Sutherland.

The Dee flows through Aberdeenshire, the Tweed passes through the Borders while the Kyle of Sutherland is an estuary in the east Highlands.

Ness District Salmon Fishery Board, which has responsibility for the River Ness in the Highlands, said reports of catches had been received from the three sites.

There have been no reported catches on the Ness, but pink salmon have been spotted on underwater cameras used by the fishery board.

The Ness was among Scottish rivers where the fish were seen and caught two years ago.

A board spokesman said: "We suspected that they may be present, albeit in lower numbers than the previous migration.

"This was confirmed on Monday when a lone male was captured on one of our underwater surveillance cameras."

There are concerns the invasive species could become established in Scottish rivers and compete with native Atlantic salmon for food.

The fish have already colonised some rivers in Norway.

Earlier this year, the national body issued advice to anglers on what to do if they should encounter the fish this year.

It said the fish should be humanely killed and handed over to the local district salmon fishery board for further analysis.

Anglers have also been asked to report sightings of pink salmon, including their spawning activity in August and September. The invasive species spawns at a different time of the year from Atlantic salmon.