Oct 1, 2019
All-out effort by salmon conservation groups and First Nations to eradicate the fish
With 30 smallmouth bass now confirmed in the Miramichi River system, a coalition of conservation groups is launching a plan to eliminate as many of the invasive fish as possible before winter.

Smallmouth bass are native to the Ohio Valley area of the U.S. and are a known threat to wild Atlantic salmon.

As part of the plan, the Department of Fisheries and Oceans hopes to airlift an electrofishing boat by helicopter to deep-water sections of the river not normally accessible to other vessels.

A Canadian Coast Guard helicopter performed a reconnaissance flight over the area Monday. A DFO spokesman says the department is now assessing if it is possible to safely drop an electrofishing boat into that section of the river.

Electrofishing stuns fish in a small area, allowing any smallmouth bass to be removed. The gear aboard the boat is more powerful than electrofishing units carried in a backpack. Officials hope it can get them into areas they couldn't otherwise reach. 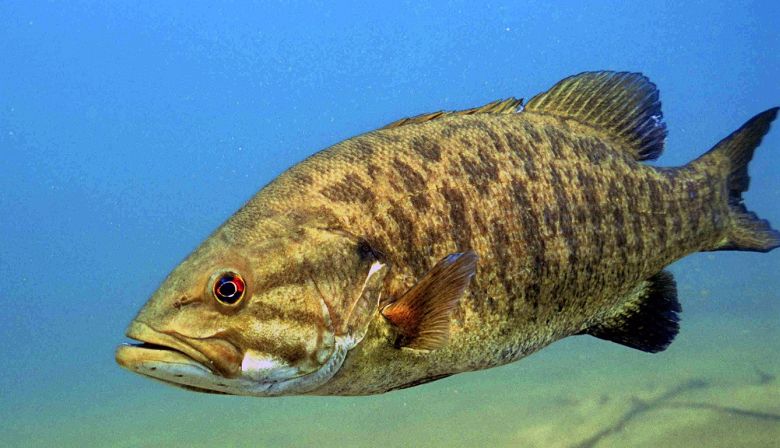 Smallmouth bass. Photo U.S. NMFS
At the same time, volunteers from salmon conservation groups and New Brunswick First Nations are on an all-out blitz this week in the McKiel Pond area of the Southwest Miramichi to catch as many of the fish as possible with rod and reel.

Environmental DNA testing earlier identified the McKiel Pond section of the river as a "hot spot" for the bass.

Twenty-two smallmouth bass from "several" age classes have been found over the past two weeks in that section of the river.

Another eight one-year-old smallmouth bass were captured last week in nearby Lake Brook, a stream flowing into the Miramichi River from Miramichi Lake.

It is believed those fish originated in the nearby lake, which is known to contain the bass, although how they came to be there is a source of dispute.

For years, the Department of Fisheries and Oceans has maintained barriers at the lake outlet to try to prevent bass from escaping into the river system.

Even so, it is widely believed in conservation circles that the fish in the main river originated in Miramichi Lake.

Nathan Wilbur, director of New Brunswick programs for the Atlantic Salmon Federation, says it is important the population be largely eliminated.

"What we're trying to accomplish right now is to just knock them back as far as we possibly can to minimize changes of spawning next spring," said Wilbur.

"What we really do not want to see is successful spawning in the river next spring. Because once you have young of the year then you're dealing with hundreds or thousands of fish."

The Miramichi Salmon Association is another non profit group hoping the bass are contained to the area around McKiel Brook and McKiel pond.

"It's only in that McKiel [area] that the positives are there, then all the way down to Boiestown we got negative readings," said Hambrook on Friday.