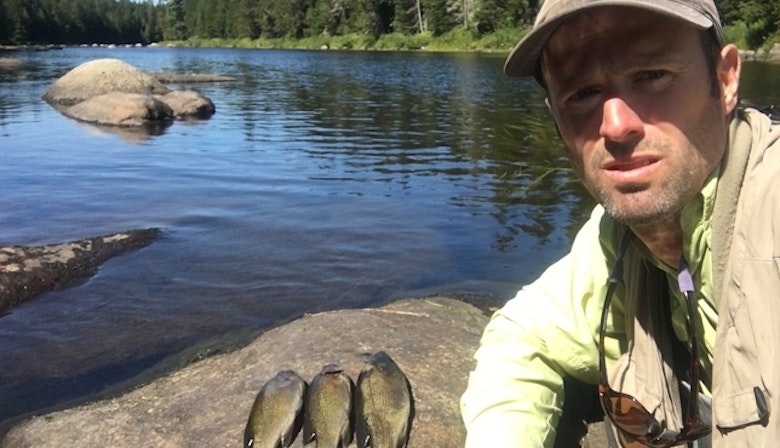 ASF's Nathan Wilbur with three smallmouth bass angled at McKiel Pond Pool in the Southwest Miramichi on 1 Sep. 2019
Smallmouth bass (Micropterus dolomieu) have become a threat to the ecosystem in New Brunswick. The fish was first found in Miramichi Lake in 2008, catching the attention of the Atlantic Salmon Federation (ASF). The Smallmouth Bass is not native to the area and was illegally introduced by sport fisherman. The bass population has been increasing since then, posing a threat to other fish species in the lake such as Atlantic salmon. The ASF alerted the Department of Fisheries and Oceans Canada, but efforts to eradicate the fish were not successful and the invasive species escaped into the Southwest Miramichi River.

Atlantic salmon are a native species that are vitally important in the Miramichi river ecosystem. The fish contribute to the growth of New Brunswick’s economy (worth almost $16 million), and providing 637 full-time jobs in rural communities connected to fishing and tourism. According to research, the salmon prefer cold water, and the decline in their population has been attributed to the rising water temperatures, in addition to an invasive predator: the smallmouth bass.

Upon discovery of the bass in 2008, the fish were tracked by scientists using Environmental DNA. This is a tool used to identify the presence and distribution of aquatic species, which can be otherwise very difficult.

According to the Atlantic Salmon Federation, the bass outcompete salmon and trout for food and habitat, and their negative impact on the Miramichi River ecosystem can change the character of the river.

The unsuccessful efforts of the Department of Fisheries and Oceans to eradicate the bass have had an approximate annual cost of $100,000 per year.

For this reason, the ASF recommended the use of a compound called rotenone to eradicate the fish from the area. The AFS explains that rotenone is a naturally occurring organic compound in the root of many plants and that it has been used by Indigenous people to harvest fish. The ASF has considered different alternatives, and rotenone is seen as the most efficient option. Rotenone has been successfully implemented in different parts of the world (including Canada) to eradicate invasive aquatic species. An ASF states that the rotenone is a common fisheries management tool in North America and it is not harmful to humans. The use of rotenone is approved for use in Canada under the Pest Management Regulatory Agency (PMRA). Rotenone breaks down naturally, but the AFS would still deactivate the substance at the downstream end of the river using potassium permanganate. Rotenone will kill the fish in the Miramichi lake, but according to the ASF report, some zooplankton and invertebrates are resilient, and they would form the foundation of the food chain as the lake recovers. Invertebrate and fish populations in treated lakes have shown a quick recovery, according to case studies.

After several years of lobbying the federal and provincial governments to eradicate smallmouth bass, a working group was formed to prepare an eradication plan.

The project has been proposed to the Department of Fisheries and Oceans, and is waiting for approval from the regulators.