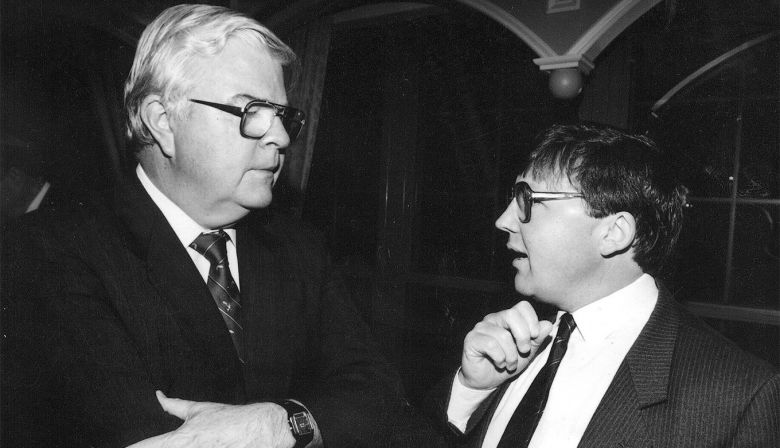 John Crosbie talks to Irish Atlantic salmon Biologist Ken Whelan at the 1992 Atlantic Salmon Symposium sponsored by the Atlantic Salmon Federation and the U.K.'s Atlantic Salmon Trust in St. Andrews, New Brunswick. John Crosbie made difficult and courageous decisions to support conservation of Atlantic salmon. Photo Tom Moffatt
John Crosbie, a firebrand of a politician who served in several federal cabinet portfolios and who played a dominant role in his beloved Newfoundland and Labrador for decades, has died.

"To Newfoundland and Labrador and to Canada, he was an independent spirit, a passionate nation builder, an orator of biting wit and charm, and always — forever — a tireless fighter for the people," reads a family statement released Friday morning.

"John's is a legacy worth celebrating, a life worth emulating, a name indelibly etched in the history of this place we love."

Arrangements for his memorial wake and funeral will be announced soon, the family said.

During a remarkable career that took him from St. John's city council to the inner sanctum of Parliament Hill, from fishing wharfs to the negotiating rooms of international trade agreements, Crosbie earned praise — and criticism — for his quick wit, saucy tongue and willingness to make controversial decisions.

Chief among those was a stomach-churning decision to shut down the northern cod fishery off Newfoundland and Labrador in 1992, a decision that instantly put an estimated 30,000 people out of work and triggered what was called the single largest industrial layoff in Canadian history.

He also oversaw Canada's fateful 1989 free-trade agreement with the United States, championed the Hibernia offshore oil megaproject in the years before its development, and served as a powerful regional minister in an era when cabinet portfolios were allowed that kind of clout. A titan of Tory politics, he was unapologetic about patronage, claiming that appointing qualified supporters to public positions was key to democracy.

Crosbie never served as premier of Newfoundland and Labrador nor prime minister, but he was politically ambitious, launching unsuccessful leadership attempts at the provincial and federal levels.

In his later years, he served as Newfoundland and Labrador's lieutenant-governor, a ceremonial role he embraced between 2008 and 2013.

His last major public appearance was in September 2018, when his son Ches Crosbie won a provincial byelection. Ches Crosbie is now the leader of the Opposition Tories in Newfoundland and Labrador's House of Assembly.

John Carnell Crosbie was born Jan. 30, 1931, in St. John's to a prominent business family. He overcame the painful shyness of his youth to emerge as a potent political force, with his career in public life stretching from the 1960s through to his final years.

Although known for a caustic wit and a willingness to argue with any political opponent, Crosbie — who trained first as a lawyer — once found public speaking so mortifying that he enrolled in a Dale Carnegie course to muster the courage to speak in public.

His political career accelerated quickly. Crosbie jumped from a seat on St. John's city council to a cabinet seat in the Liberal government of legendary Newfoundland premier Joseph R. Smallwood in 1966.

But Crosbie resisted becoming a Smallwood protegé, and in 1967 quit cabinet — with future Liberal premier Clyde Wells — over frustrations with a deal Smallwood wanted to make with American industrialist John Shaheen over an oil refinery at Come By Chance.

Crosbie stayed on the sidelines of the provincial Liberals before stepping into a leadership race in 1969 to replace Smallwood. His ambitions were thwarted in bizarre fashion, though, when Smallwood — still the sitting premier — entered the leadership race to replace himself, insisting that Liberals could not trust the young politician he decried as a "merchant princeling."

Crosbie broke ranks with the Liberals and, in a fateful move, jumped to the Progressive Conservatives, helping the once-feeble Newfoundland Tories muster enough strength to topple the 23-year grip on power that Smallwood had enjoyed. With Frank Moores as premier, Crosbie emerged as the de facto powerhouse of the PC government, serving in roles that included finance and government House leader.

By 1976, the lure of federal politics took Crosbie to Ottawa, after he won a byelection in St. John's West — the riding he would represent for most of the next two decades.

In 1979, he was finance minister in Joe Clark's short-lived Tory government, wearing mukluks (rather than the traditional new pair of shoes) to bring in a tough-love budget that included tax increases for what Crosbie called "short-term pain for long-term gain."

Clark's government wound up having a short term, with the Liberals putting Crosbie's budget to a non-confidence vote that triggered a new election.

In 1983, Crosbie entered the subsequent PC leadership contest that Clark called to resolve tensions within the party. He wound up placing third, behind Clark and the victor, Brian Mulroney. Crosbie declined to endorse either candidate, and earned attention as the largest defender of free trade in the race. But his campaign came under attack when, defending his inability to speak French, he quipped that he could not speak Mandarin Chinese, either.

As a key member of Mulroney's team in the wake of the Tory triumph in the 1984 election, Crosbie held several portfolios in the years to come: justice, transport, international trade and fishery.

A dedicated free trader, Crosbie held the torch for Canada as it negotiated the Free Trade Agreement with the United States. The FTA became the template for NAFTA, the trilateral agreement later reached with Mexico.

His time in Parliament was marked as much by colour and controversy as by his political ambitions.

"Just quiet down, baby," he told Liberal MP Sheila Copps in an infamous June 1985 exchange in the House of Commons. "I'm not his baby, and I'm nobody's baby," Copps fired back.

Five years later, Crosbie ignited another controversy about Copps when he quoted the lyrics of a Bobby Bare song at a B.C. fundraising dinner. "Pass the tequila, Sheila, and lay down and love me again," he said. Crosbie and Copps, despite the headlines, became friends. She titled her 1986 autobiography Nobody's Baby and he wrote the introduction for her second book, Worth Fighting For, in 2004.

Crosbie frequently earned the ire of feminists — New Democrat Dawn Black, one of what Crosbie called the "four horsewomen of the apocalypse" once called him a "Crosbiesaurus" — but he also held firm to Red Tory beliefs. Pro-choice, Crosbie actually fought in 1990 for the reinstatement of funding that had been cut for women's programs across Canada, and held progressive views on social issues, including protecting LGBT people from discrimination.

Shutting down the fishery

In his final years in cabinet, Crosbie took on the fisheries portfolio — as well as the politically difficult decision to shut down the northern cod fishery on July 2, 1992. The decision came after months of consistently worsening reports of the state of cod stocks, and would be followed by other closures in Atlantic Canadian waters.

The day before, on Canada Day, Crosbie uttered one of his most famous remarks when he was confronted by angry fishermen on the wharf in Bay Bulls.

"Why are you yelling at me? I didn't take the fish from the God damn water," Crosbie yelled back.

It was a sign of Crosbie's clout in cabinet that he was able to deliver a massive compensation package that provided transitional income for about 28,000 people who either fished for a living or worked in fish plants that subsequently closed.

Crosbie retired from federal politics in 1993, the same year the PCs would be not only cleared out of office but reduced to a caucus of just two seats. Crosbie, who thought little of Kim Campbell's leadership, found himself to be the blunt party member who called it the way he saw it after the loss.

"The world knows who's responsible," Crosbie told CBC News. "It's the leader and those immediately around her who advised during the course of the election campaign. They must bear the burden of responsibility."

Although Crosbie would toy with the idea of a return to elected office — he briefly entertained the thought of a federal comeback leading into the 2004 election — he found other pursuits after Ottawa.

He wrote a 1997 memoir, No Holds Barred: My Life In Politics, in which he detailed behind-the-scenes exchanges with his former colleagues among the high and mighty. He also acknowledged that his sense of humour could be a liability with some pundits and journalists.

"I refused to act as though I'd been weaned on a pickle," he wrote, describing how he stood out from other politicians.

"The media, however, wouldn't make the effort to listen to what I was saying or understand what I was doing. Instead, they stereotyped me as a buffoon, an entertainer, a jokester who was incapable of taking serious matters seriously."

Crosbie also found himself bristling at having been often labelled a "loose cannon because I refused to pussyfoot around issues and only say safe, predictable things."

Away from the political limelight, Crosbie returned to a private legal practice, but found new ways to participate in public life.

In 1994, he was named chancellor of Memorial University, a post he held for 14 years.

In 2008, he was appointed lieutenant-governor of Newfoundland and Labrador. His five-year term returned him often to the public eye, albeit in a much more ceremonial fashion.

During his tenure as lieutenant-governor, Crosbie pursued a project of passion: developing a memorial to sealers, particularly those killed in a notorious 1914 disaster. The Home From The Sea centre and memorial was formally unveiled in 2014.