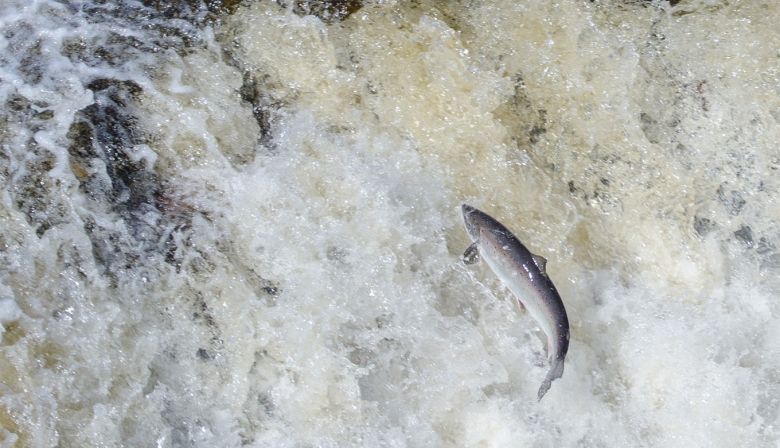 An Atlantic salmon leaping on the Big East River on Newfoundland's Northern Peninsula. Tom Moffatt/ASF
As president of the Salmonid Council of Newfoundland and Labrador (SCNL), I regularly review the science data for adult salmon returning to Newfoundland and Labrador rivers. This information is provided by DFO science each season and is used to determine the level of harvest that the rivers can support for the next season.

In reviewing this data, one thing that stands out above all is the dramatic declines on three south coast rivers — the Conne, Little and Garnish Rivers. No doubt other south coast rivers are seeing similar declines, but they are not monitored.

The counts of returning adult salmon on these three rivers are now 95 per cent lower than they were around 1985. In the last couple of years, virtually zero adults returned to Little River, and the Conne River has declined from a population of around 10,000 to just 300. The salmon populations in these rivers are approaching extinction.

The salmon populations of all our south coast rivers are designated by the Committee on the Status of Endangered Wildlife in Canada (COSEWIC) as “Threatened.” Other than that, nothing has been done by either DFO or the province to determine the specific causes of these dramatic declines or to address probable causes. This is a shameful situation and rests squarely with DFO.

During the period of this decline, the aquaculture industry has been established in the same area on the south coast and there is an exact match in both space and time of the development of the aquaculture industry and the declines in wild salmon populations in these rivers. Salmon aquaculture in N.L. is open net pen, whereby salmon smolt are placed in cages and grown to market size over a period of about 1.5 years. The cages are open to the sea and are located near the mouths of salmon rivers. DFO has determined that the impacts from open net pen aquaculture are a likely cause of declines in wild salmon populations, but no studies have been done to establish this with certainty.

The three main sources of negative impacts from aquaculture are escapes, sea lice and disease. Not surprisingly these are major problems for the aquaculture industry leading to crippling losses, mass die-offs, quarantines and a negative public image.

Escaped farmed salmon interbreed with wild salmon, causing genetic degradation and competition for food and habitat. The south coast is a prime example of this impact, and while it has been well studied and documented by DFO scientists, they have stopped short of naming it as a cause of the declines in wild salmon populations.

Salmon aquaculture leads to unnaturally high levels of sea lice in the dense stocking environment of the sea cages. The sea lice attach to smolt as they swim by the cages on their way to the sea. Smolt are small and just 10 sea lice can kill a smolt, thereby preventing it from becoming an adult. Sea lice also create pathways for disease. While there is compelling evidence from Norway and other jurisdictions that high levels of sea lice associated with salmon aquaculture have significant negative impacts on wild salmon populations, there have been no N.L. studies to determine this.

Infectious salmon anemia (ISA) virus has become a major issue for the N.L. salmon aquaculture industry leading to significant losses and frequent quarantines. ISA is highly contagious and spreads to wild fish. The incidence of ISA is well known and has been documented by the Canadian Food Inspection Agency.

DFO is in the untenable position of being a facilitator and promoter of the aquaculture industry and is also responsible for the conservation and protection of wild Atlantic salmon. SCNL has urged DFO to convene the N.L. Regional Science Committee to study these three rivers and the possible causes for the declines over the last 25 years and to evaluate whether the impacts of open net pet salmon aquaculture is a significant contributing factor.

DFO should also fund a comprehensive research study to examine the impacts of sea lice on our south coast salmon populations. By taking these actions, DFO will provide a service to the aquaculture industry and also a basis to protect wild Atlantic salmon as their mandate and duty requires.