Oct 1, 2019
'What we're seeing with this commitment is a really reckless decision,' says industry official
Canada's aquaculture industry is condemning a Liberal Party campaign promise to phase out open-pen salmon farms in British Columbia as "reckless" and "irresponsible," while a Liberal candidate running for re-election in a salmon farming area in southern New Brunswick is also expressing reservations.

Karen Ludwig, who was elected MP for New Brunswick Southwest in 2015, said moving toward closed-containment systems, which involve farming fish in land-based tanks or in pens walled off from the open ocean, "really is a long transition, if that's even going to happen."

"When we look at where science is at, I don't believe — from what I've researched and heard — that science is at this stage where we could go, where we can quickly make a transition to closed containment," she said.

The Liberal platform unveiled last weekend promises to develop a plan to transition from open-pen salmon farms to closed-containment ones on the West Coast by 2025.

The Canadian Aquaculture Association and regional counterparts in Nova Scotia, P.E.I. and Newfoundland and Labrador issued a joint statement Monday denouncing the promise as "not grounded in science" and "threatening" jobs.

Canadian president Tim Kennedy said the industry was caught by surprise since it had been working with the Liberal government before the election to expand the life of the fish grown on land while continuing to farm them in the ocean.

"What we're seeing with this commitment is a really reckless decision by the Liberal Party to move toward a technology that is not yet ripe, is not mature," Kennedy said.

"So, it would have very serious potential consequences for employment across Canada and for sustainable food production." 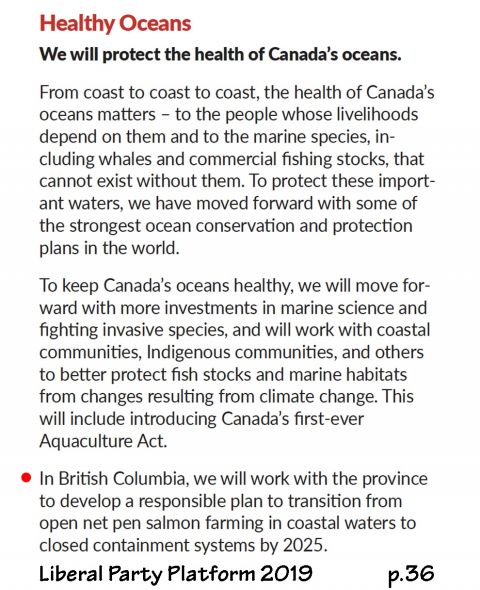 Kennedy said the promise also increases uncertainty in Atlantic Canada, even if the region's industry is not mentioned in the platform.

"You can't impose something as a national government in one area and expect it not to have implications for the rest of the country," he said.

"We have the same companies that are operating on both coasts, so it's a very, very negative signal."

A Liberal Party spokesperson told CBC News the policy applies only to the West Coast.

Ludwig's in no rush to see it brought to Atlantic Canada, which she said has a different marine environment, pointing to the massive tides that sweep into the Bay of Fundy daily.

"We're unique. We've had a very successful industry for 30 years. It may work in British Columbia. I'm not a representative from British Columbia, but I can say here that I will be working very closely with industry and be backing them up," Ludwig said.

Environmental groups have long called for a transition from open-net fish farming to closed-containment aquaculture, which they say would protect the marine environment from the waste, chemicals, escapes and sea lice associated with open-pen salmon farming.

"It's absolutely imperative that the industry be transitioned from open net-pen aquaculture with all of its environmental problems to closed containment," said Raymond Plourde, an environmentalist with the Halifax-based Ecology Action Centre.