Sep 30, 2019
Canadian prime minister Justin Trudeau has released his Liberal Party's full campaign platform, seeming to declare that it would move all aquaculture in the province of British Columbia to closed containment by 2025. 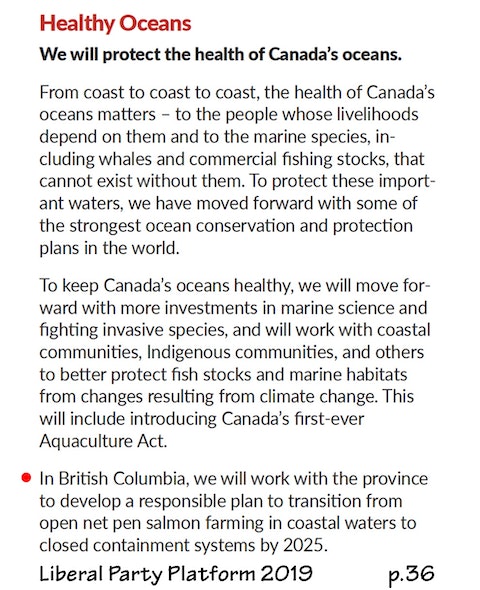 The Liberal Party of Canada's platform states the government would move B.C. Aquaculture production to land by 2025
Canadian prime minister Justin Trudeau has released his Liberal Party's full campaign platform, seeming to declare that it would move all aquaculture in the province of British Columbia to closed containment by 2025.

Canadian prime minister Justin Trudeau has released his Liberal Party's full campaign platform, seeming to declare that it would move all aquaculture in the province of British Columbia to closed containment by 2025.

As Canada's Oct. 21 election looms, the contest between Trudeau's Liberals and the challenger Andrew Scheer-led Conservative Party has tightened, with the Conservatives pulling ahead in the polls less than a week ago with a three-to-five point lead, based on multiple polling services reported on by Agence France-Presse.

The recent surge by the Conservatives has reportedly been helped by the controversy surrounding the recent emergence of pictures showing Trudeau has worn black or brown face on multiple occasions, including as recently as 2001, though as many as 11% of voters remain undecided, according to the polls.

It's customary for the political parties in a Canadian general election to release new platforms just before the vote, but the 85-page document Trudeau unveiled on Sunday, Sept. 29, includes several initiatives that might boost his party's appeal, including a commitment to provide funds to support post-secondary student and graduates largely with new taxes on internet giants and luxury goods, the CBC reported.

The federal minimum wage would rise to CAD 15 ($11.32) per hour and the government would create a CAD 200 "culture pass" available to children 12 and over to cover the cost of theaters, museums, art galleries and other cultural venues.

Pierre Pollievre, one leader of the Conservative Party, which has yet to release its own platform, has criticized the Liberals' plan as "Justin Trudeau's credit card campaign", saying it increases the spending with no plan to balance the budget.

However, the parts of the plan that are of most consequence to the Canadian aquaculture industry come under the document's category of "Healthy Oceans". The Liberal Party pledges there that it will "protect the health of Canada’s oceans" on behalf of "the people whose livelihoods depend on them and to the marine species, including whales and commercial fishing stocks, that cannot exist without them".

"To keep Canada’s oceans healthy, we will move forward with more investments in marine science and fighting invasive species, and will work with coastal communities, Indigenous communities, and others to better protect fish stocks and marine habitats from changes resulting from climate change," the online document reads. "This will include introducing Canada’s first-ever Aquaculture Act.

"In British Columbia, we will work with the province to develop a responsible plan to transition from open net-pen salmon farming in coastal waters to closed containment systems by 2025."

Aquaculture Act is a ray of sunshine for industry

As for the focus on better protecting fish stocks, Paul Lansbergen, president of the Fisheries Coalition of Canada (FCC), the voice of the Canadian wild catch fishing industry, responded to a request for comment from Undercurrent by noting that his group “advocates science-based decision making, including analysis to inform targets and goals".

Lansbergen said FCC "will work with the next government on these important issues with a focus on all three pillars of sustainable development – environmental, economic and social.”

“FCC supports ocean science investments, particularly with a focus on adapting to climate change. We look forward to working with [Canada's Department of Fisheries and Oceans] to ensure our fisheries remain sustainable in the face of climate change,” he said.

And, while the planned replacement of BC's net pens with recirculating aquaculture systems (RAS) would be bad news for Canada's aquaculture industry, the plan to introduce the Aquaculture Act is one ray of sunshine.

The bill being discussed is expected to give the industry the same kind of governmental boost already enjoyed by salmon farmers in Norway, Scotland and Chile, while also creating a separate insurance program for Canadian salmon farmers, similar to the crop insurance benefits enjoyed by the country’s land farmers.

It’s “critical” that the Canadian aquaculture industry has a “modern piece of legislation” to give it legitimacy, allow the federal government to better coordinate with the provinces and, most important to CAIA, identify a department at the federal level that supports the aquaculture sector, the CAIA's president and CEO Tim Kennedy told Undercurrent in December.

He was talking about the news then that the fisheries ministers in all 10 of Canada's provinces agreed to support the administration's initiative, which would amend the Fisheries Act, C-68. CAIA has been championing the notion of a separate aquaculture law for six years.

The country’s Senate Committee on Fisheries and Oceans delivered a report to the full upper chamber in June 2016 that gave 10 recommendations aimed at doubling sustainable aquaculture production in 10 years, including the passage of an aquaculture act. The federal government, in November 2016, committed to exploring options for such legislation reform.

Canada ranks fourth among salmon-producing countries in the world, behind Norway, Chile and the United Kingdom, and 26th in total aquaculture production, behind China, Indonesia, India and Vietnam, DFO noted. Aquaculture represents about a third of Canada’s total seafood value and 20% of its production, it said.

New rules for tracing and labeling

The Liberal Party raised another issue of importance to the seafood industry as well, noting under a separate section, entitled "More Accurate Labeling", it's plans for boosting confidence in Canadian seafood products.

"Because of illegal fishing and complex international supply chains, it’s estimated that more than 40% of the fish and seafood products sold in Canadian stores and restaurants are mislabeled," the document said. "This makes it difficult for people to know what they are eating, and undermines confidence in Canada’s own fishing industries.

"To combat this type of fraud and help Canadian fishers better market their high-quality products, we will move forward with a 'boat-to-plate' traceability program, developed in partnership with industry and environmental leaders."

Iceland’s cod sales to Spain rocket as other main markets declineThere’s some concern about the new MPA targets and stability of access issues.

“FCC acknowledges the need to protect the world’s oceans and fish resources. In fact, our sector contributes to that through strong sustainable fisheries management, as evidenced by our world leading adoption of third-party certification.”

FCC's Lansbergen applauds the idea of working to improve the accuracy of seafood labels, noting that his group has been working with the Canadian Food Inspection agency on how to address the issue.

"FCC firmly believes that the accuracy of labeling is much greater than suggested," Lansbergen said. "Canadians benefit from a strong food safety system. They can have confidence buying seafood.”