Low flows and warm waters a concern for NL anglers 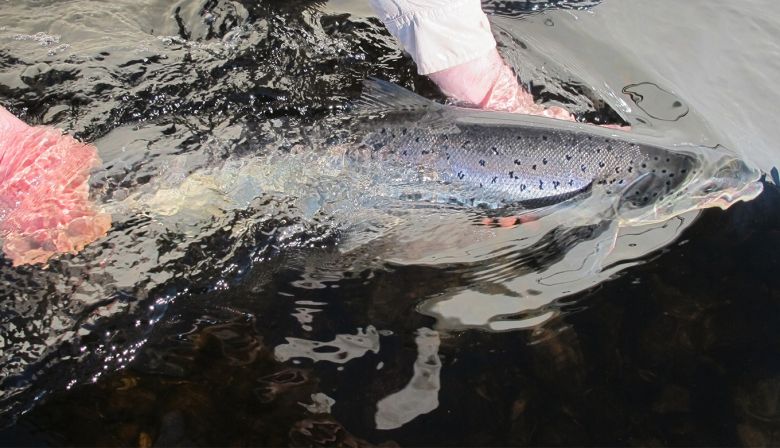 Release of Atlantic salmon on Exploits River. Photo Bill Bryden
With salmon angling season beginning next week on the island, there are already concerns about the effect that the mild winter and spring is having on the province's rivers.

Angling season runs June 1 to Sept. 7 on the island and June 15 to Sept. 15 in Labrador. Salmon licences can be bought at gas stations, convenience stores and major chain stores throughout the province, and must be signed in order to be valid.

Bob Bishop, president of the Salmonid Association of Eastern Newfoundland, says he anticipates low water levels across the province.

"As it stands right now, we're looking at fairly unprecedented water levels for this time of year. So that's very much a concern, along with the possibility of warmer water, warmer air temperatures as well, which then heats up lower water much quicker."

Already this year, the water levels on the island have been low enough to make an impact.

In April, the province entered a temporary energy exchange agreement with Corner Brook Pulp and Paper to provide power for mill operations due to low water levels in the Grand Lake reservoir.

Bishop says the temperature of the water is as much a concern as the level. If a river exceeds 20 C for two to three days, the Department of Fisheries and Oceans will consider closing the river to angling from 10 a.m. to an hour before sunrise the next day.

"Once the water temperature reaches that level, the fish are pretty lethargic, so the fishing is not going to be good anyway. But the question is whether the fish should be stressed by being fished for and so on. The idea being is to protect the fish when they're particularly vulnerable," said Bishop.

The warm weather isn't the only worry. Many of the prime angling regions in central Newfoundland have been moved back into Alert Level 4 following an outbreak of COVID-19 in the area.

Outdoor activities in those regions are still permitted, and encouraged, so long as physical distancing can be maintained.

"For traveling anglers," said Bishop, "it would certainly be a case of bringing all your food and being prepared to look after all your needs while you're there and to self-isolate within your group or within your bubble, you know, difficult as that may be."

This upside, said Bishop, is that while the season opens next week, the fish don't really start moving into central Newfoundland until late June.

"Right now, the areas where you're going to see the, you know, people who travel to fish, most of them will be going to the southwest coast."

Like many salmon anglers, Bishop has high hopes for a good season, but if the water temperatures are higher than average, he hopes to see environmental protocols enforced.

"I've been fishing for far longer than there's been environmental protocols. And I do know that with low water and warm water temperatures, you probably would be better off on a golf course somewhere."

Specifics on the river classification system and a guide to the province's rivers can be found in the 2021-22 Fisheries and Oceans Canada Angler's Guide, provided by the federal government.