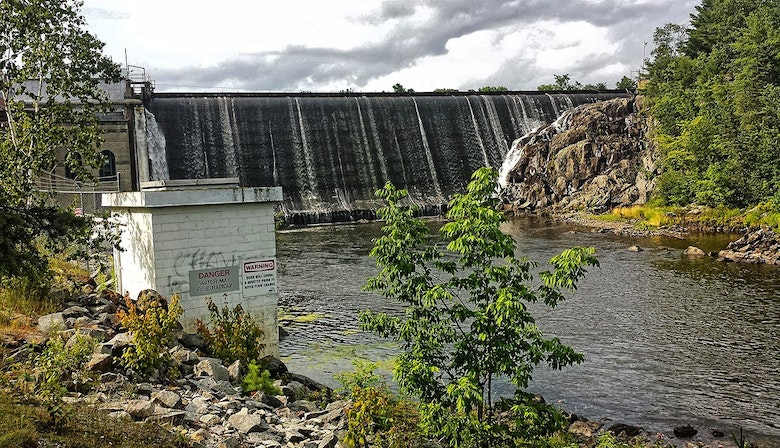 Union River Dam. Photo by Kevin Stewart
COLUMBIA FALLS, M.E. – On March 19th the Maine Department of Environmental Protection (DEP) denied the application for water quality certification filed by Brookfield Renewable for its two Union River dams located in downtown Ellsworth and at the base of Graham Lake. Unless this decision is overturned these dams cannot be relicensed by the Federal Energy Regulatory Commission (FERC).

DEP’s denial was based on results of water testing by Brookfield submitted to DEP as part of its application for licensing. This testing showed multiple violations of state water quality limits affecting both Graham Lake and the Union River below the Graham Lake dam.

“Maine DEP did the right thing here,” said Dwayne Shaw, the Executive Director of the Downeast Salmon Federation. “The DEP should be applauded for scrupulously following Maine law to ensure that our rivers and lakes are protected. Brookfield left DEP no choice but to deny certification, since Brookfield’s own tests and our documentation demonstrated these water quality violations. Further Brookfield never offered up any information to show how it would eliminate these violations if its application were approved.”

Dwayne Shaw went on to note, “Sadly, we can expect Brookfield to appeal this decision in State court, and potentially ask FERC to intervene to allow Brookfield to prolong the process and delay the time when Brookfield must stop status quo operations. We do not believe Brookfield will be successful in these actions; DEP’s decision is supported by decades of well-established law and precedent. Brookfield should now do the right thing and begin discussions in good faith over how it intends to operate these dams in an environmentally conscientious way.”

DEP’s decision intends to put to an end the large and ecologically destructive water drawdowns that have plagued Graham Lake and its shoreland property owners. Brookfield may try to continue these drawdowns if it appeals, but such action could well be subject to legal challenge.

Over the last five and one-half years, Mr. Shaw noted that “DSF has spearheaded the public effort to change the operations of these two dams. We have advocated for the immediate installation of high quality upstream and downstream fish passage to prevent on going fish kills and allow natural migrations to occur. These actions will begin to restore the hundreds of thousands of native sea-run fish that once lived in the Union River—including endangered Atlantic salmon, American shad, American eel, and river herring. Over these years hundreds of comments were submitted by community members, the Friends of Graham Lake, and the Passamaquoddy Tribe that helped put all the facts on the table.”

“Together we are moving the river toward a healthier future,” said DSF fisheries biologist Brett Ciccotelli. “Without all of these voices demanding that the Union River and Graham Lake be restored we never would have gotten this far. We must now turn to Brookfield, and demand that they become a responsible corporate owner and work with DSF, the State of Maine, and other stakeholders to achieve a solution that restores the health and the once-abundant fisheries of the Union River.”

Downeast Salmon Federation is a Washington County based 501(c)3 non-profit whose dedicated staff, board, and membership support its mission to conserve wild Atlantic salmon, other sea-run fish and their habitats, restore a viable recreational salmon fishery, and protect other important river, scenic, recreational, and ecological resources in eastern Maine. More information about its activities can be found at https://mainesalmonrivers.org/habitat-restoration/union-river/